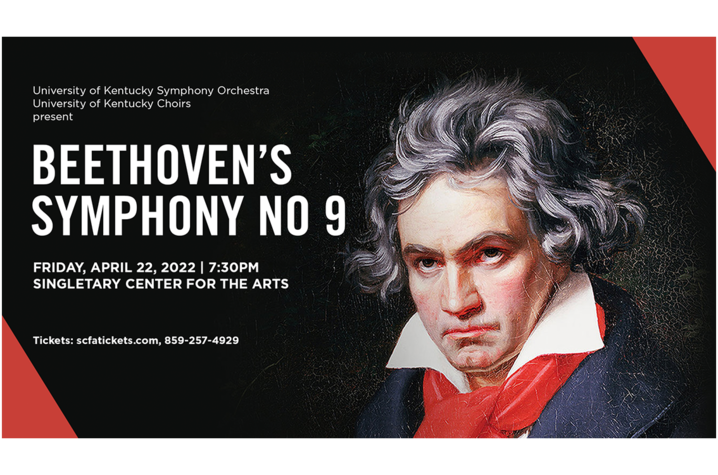 LEXINGTON, Ky. (April 20, 2022) — The University of Kentucky Symphony Orchestra (UKSO) and the UK Choirs celebrate joy for their season finale with a performance of Beethoven's Symphony No. 9 "Choral,” at 7:30 p.m Friday, April 22, at the Singletary Center for the Arts.

In Spring 2020, UKSO’s commemoration of Beethoven’s 250th birthday was cancelled due to the COVID-19 pandemic. Music director and conductor John Nardolillo is thrilled to celebrate Beethoven in front of a live audience and close the season with this beloved work.

“Beethoven 9 is not just one of the greatest pieces of music ever written, but one of the great accomplishments of man,” Nardolillo said. “The impact of this piece of music cannot be overstated, and we have had a great time working on the score to prepare for the concert. We planned this performance for the spring of 2020, but could not perform because of the pandemic; we have been waiting for this performance for a long time.”

Tickets for the concert are $10 for general admission, $4 for students and free for UK students with a valid UK ID before the day of the performance at the Singletary Center ticket office (plus processing fees). Tickets are available through the Singletary Center ticket office online at www.scfatickets.com, by phone at 859-257-4929 or in person at the venue. Children six and older are welcome.

Mask-wearing is optional for audience members at UK School of Music events. If you or someone in your party are ill or displaying symptoms of COVID-19 we kindly ask that you refrain from attending in order to slow the spread of the disease. Thank you for attending responsibly.

The UK Symphony Orchestra and the UK Choirs are housed in the School of Music at UK College of Fine Arts. The UK School of Music has garnered a national reputation for high-caliber education in opera, choral and instrumental music performance, as well as music education, music therapy, composition, and theory and music history.