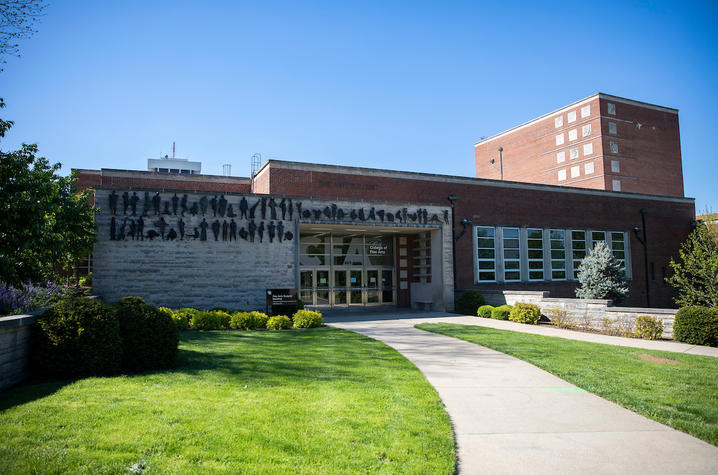 LEXINGTON, Ky. (July 2, 2021) — The University of Kentucky Department of Theatre and Dance is excited to announce its upcoming 2021-2022 season. Given the upheaval that 2020 brought to our artistic communities, a chance to return to in-person performances is a breath of fresh air for these talented Wildcats, as well as an opportunity to engage its community.

Last season, Tony Hardin, chair of the Department of Theatre and Dance, and the rest of the faculty were faced with a difficult decision that many in the performing arts industry were also grappling with — how do we move forward? With students, faculty, staff and audience safety in mind, the department chose to forego a traditional season and create a robust slate of smaller projects and performances. Those projects manifested into the Relevant Creativity series allowing the students in the department to continue to hone their craft in the art and practice of theatre and dance. Some events were held live outside, while others were recorded and distributed through CFA’s Vimeo site.

“I am proud of the department — the faculty, staff and students. Last year, they rose to the challenge of continuing to create engaging and thought-provoking work in the middle of a global pandemic,” Hardin said. “It is the arts that allow us to tell the story of the human condition, and it is the arts that kept many people going through this dark time in our human history. This year, this season isn’t a comeback for live performance, it is a resurgence!”

Now, with the Department of Theatre and Dance set to return to its beloved Guignol Theatre stage, it is proud to announce its 2021-2022 Main Stage Season of thought-provoking, culturally conscious productions alongside a first-time collaboration between the university’s dance and musical theatre students.

“The Thanksgiving Play” is presented by arrangement with Concord Theatricals on behalf of Samuel French Inc.

Up next is "The Laramie Project," by Moisés Kaufman and the Members of Tectonic Theater Project. "The Laramie Project" will be presented Nov. 18-21, online. In 1998, 21-year-old Matthew Shepard was kidnapped, severely beaten and left tied to a fence in a prairie outside Laramie, Wyoming. He died five days later. Shepard was murdered because he was gay.

Moisés Kaufman and fellow members of the Tectonic Theater Project made six trips to Laramie over the next year, in the aftermath of the beating and during the trial of the two young men accused of killing Shepard. They conducted more than 200 interviews with the people of the town. “The Laramie Project” is a bold work that explores a community torn apart and dealing with its legacy.

Just days before Valentine's, the department will present its Music and Dance Collaboration, Feb. 11–13, 2022. A new project born from a special collaboration between the School of Music and Department of Theatre and Dance, this production will showcase the essential connection between music and dance. The College of Fine Arts’ unique blend of artforms comes together onstage for an original conceptual experience, pairing the young dance program, in its 11th year, and the century-old School of Music. Movement. Melody. Form. Rhythm. Together, live on stage.

Later that same month, the department will take a more serious turn with “Black Lives Matter: 1619 to Now," a documentary drama curated by UK faculty artists and scholars scheduled to run Feb. 24–27, 2022, will mark 10 years since Trayvon Martin was murdered and the hashtag #BlackLivesMatter was created. This work acknowledges the notion that Black Lives Matter has been stated simply and shouted loudly through the years, decades, centuries. The enslaved African people, the abolitionists, anti-segregationists, anti-lynching, pro-civil rights advocates, Southern Christian Leadership Conference (SCLC), Student Non-Violent Coordinating Committee (SNCC), Black Power, Black Arts Movement, freedom fighters were all, in their way, calling out that Black Lives Matter.

Though this new production, UK's Department of Theatre and Dance wants to provide its audience of students, faculty, staff and Central Kentucky community members with a thoughtful, insightful, factually accurate and emotionally compelling, rendering of American history that places the BLM movement of the past 10 years in its full context in a powerful live documentary drama.

To close out the season, UK Department of Theatre and Dance will stage “Bright Star,” music, book and story by Steve Martin and Edie Brickell, April 7–10. Inspired by a true story and featuring the Tony®-nominated score by Martin and Brickell, Broadway’s “Bright Star” tells a sweeping tale of love and redemption set against the rich backdrop of the American South in the 1920s and ’40s. When literary editor Alice Murphy meets a young soldier just home from World War II, he awakens her longing for the child she once lost. Haunted by their unique connection, Alice sets out on a journey to understand her past — and what she finds has the power to transform both of their lives. With beautiful melodies and powerfully moving characters, the story unfolds as a rich tapestry of deep emotion.