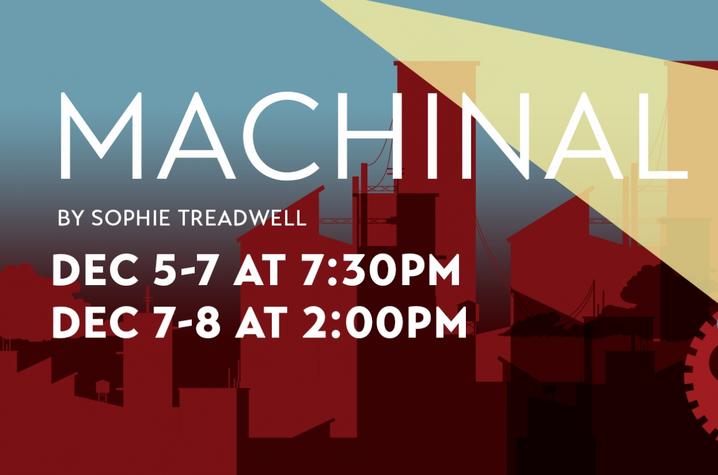 LEXINGTON, Ky. (Nov. 25, 2019) — Next up for the University of Kentucky Department of Theatre and Dance is a play based on the real-life case of a convicted and executed murderer. “Machinal” runs Dec 5-8, at the Guignol Theatre, located in the Fine Arts Building.

“Machinal” is American playwright and journalist Sophie Treadwell's expressionistic play about a woman’s monotonous life in the “machine” of industrialized capitalism. An unflinching and poignant examination of the working class, “Machinal” tells its social commentary in an evocatively theatrical way — unafraid to dive into topics like homosexuality and abortion, this groundbreaking work premiered nearly a century ago and still resonates to the 21st century audience.

“What’s amazing about the piece is that it’s almost 100 years old, and while certain elements do feel dated — other things feel so startlingly now,” said Christina Ritter, director of UK’s production. “Especially coming after the ‘Me Too’ movement, we hear things in a very different way. It's an important play to do now. The style of the piece is coming out of German expressionistic style of the 1920s — the language is formal and stylized, but what’s of more interest to me is how the play and the issues brought up are so very current. The show has a striking relation of the current times.”

“Machinal" will command the Guignol stage 7:30 p.m. Thursday-Saturday, Dec. 5-7, and 2 p.m. Saturday and Sunday, Dec. 7 and 8. Tickets to "Machinal" are $10 for students with a university ID and $15 for the general public. To purchase tickets to UK Theatre and Dance's productions at Guignol Theatre, contact the Singletary Center ticket office at 859-257-4929, visit online at www.scfatickets.com, or visit the ticket office in person.