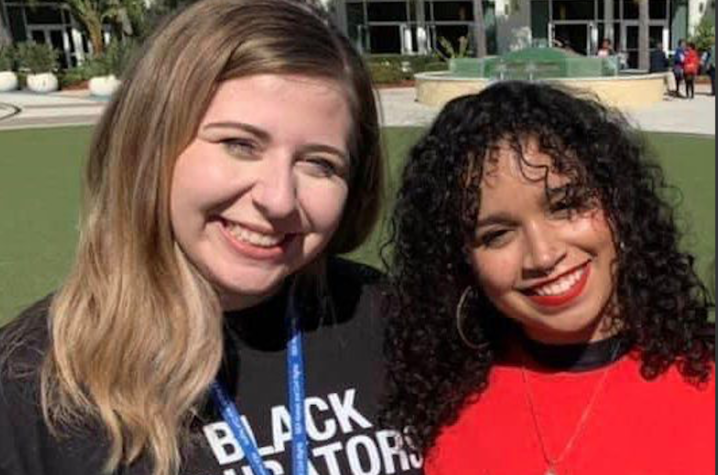 LEXINGTON, Ky. (Aug. 25, 2020) — Cameo Kendrick and Rachel Immerman, recent graduates of the University of Kentucky, crossed paths during their time as students in the UK College of Education. Both were passionate about education, with their sights set on leading classrooms, while also impacting large-scale change.

Their chance meeting through the National Education Association made a difference in their own lives, and has touched students and aspiring educators across the nation.

Immerman, a 2018 elementary education graduate, put her teaching career on hold to spend two years working full time with the National Education Association, in both Washington, D.C., and across the nation, as the Aspiring Educators chairperson.

“During my term, we prioritized our work on dismantling white supremacy culture and uplifting a culture of distributive leadership, through virtual organizing, recruitment and retention and community building. What's most exciting and heartwarming to me is that we did not start, nor did we end, this work in these two years.”

“Cameo has a genuine enthusiasm, unwavering commitment, and passionate energy,” Immerman said. “As I've worked with her over the past five years, I have only grown fonder of her, her work, and her vision. She is exactly who we need to be a guiding light for aspiring educators over the next two years and to help lead the transformation of the future of public education for generations of students to come.”

It was during Kendrick’s first education class that she met Immerman, who was there as a guest speaker. The students had been reading books about inequality and standardized testing. They were engaging in class discussions about how testing had created systematic oppression of minority students, fueling Kendrick’s desire to influence the education system and create change.

But, a few years older than her classmates and raising two children, she was feeling disconnected from the college experience. “I didn’t feel like I had found my place,” Kendrick said.

Her sense of purpose became clear when Immerman introduced her to the student chapter of the Kentucky Education Association. Although Kendrick said it was outside her comfort zone, she joined Immerman and hundreds of aspiring educators across the state for the association’s fall conference. Soon, she was an involved member, first elected ethnic minority representative. The following year, she became president-elect, then finished her final year of college as president — just as Immerman had.

“I finally felt connected to other students, people who would understand what I’m doing in school. It was nice because that connection would span further than my time in college. These aspiring educators were people I could stay connected with, as teachers and influencers in Kentucky and on a national scale,” Kendrick said.

As Kentucky’s ethnic minority representative, Kendrick worked with equity offices and helped plan minority leadership conferences. She enjoyed speaking to diverse groups of students in high school who were considering careers in education and pairing them with college students for mentorship.

“I quickly knew this was what I was supposed to be spending my energy doing,” she said. “I am passionate about making public education better.”

As she wrapped up her two years as chair this summer, Immerman began applying for jobs as an elementary teacher in Cincinnati. Kendrick feels, when her time comes to teach, she will land exactly where she is supposed to be and will be aided by her experience as a UK student and national leader.

“We have a notable education program here at UK. It’s notable not just in Kentucky, but nationwide,” she said.

Her own educational experiences, and those of her two young daughters, help to motivate her work.

“Majoring in education as a woman of color and raising two beautiful daughters on my own, my eyes have been opened to the bigger picture and have shown me my other life’s calling. I want to be an advocate for others and for public education. These two callings are intrinsically linked, and I look at public education as a keystone institution in the fight for a more equitable society,” Kendrick said.