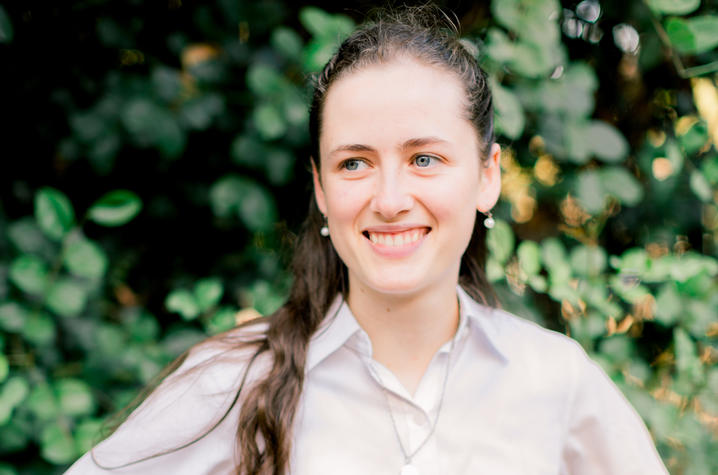 LEXINGTON, Ky. (July 13, 2020) — People often ask Christopher Decker of Los Angeles, California, why his daughter Sophia Decker, whom he describes as an extremely gifted student, particularly in languages, chose to attend the University of Kentucky.

“I always respond by saying she fell in love with Latin and Ancient Greek. When I say there is only one accredited university in the U.S. where the classics faculty conduct class in the target language, people often guess it to be Harvard, Yale, Georgetown or Notre Dame. The correct answer is the University of Kentucky, and that is why Sophia chose to attend UK,” he says.

Christopher Decker and his wife, Theresa Decker, were so impressed by UK’s Latin program where they watched their daughter thrive, that they recently gifted a $25,000 endowed fund to the UK Department of Modern and Classical Languages, Literatures and Cultures, housed in the UK College of Arts and Sciences.

“Sophia was immediately attracted to the program at UK, which gave her an education in classical languages and literature unrivaled by any other institution in the United States,” Theresa Decker says. “While studying in Europe, she met students of classics from Poland, France and Germany, as well as other countries, and many of these students knew about the program at UK. Some even hoped to travel to Kentucky to take advantage of the program there.”

Sophia Decker said that it is not every day that most people receive a text message in Latin. But for a classics major at UK, one of the only universities in the world where Latin is used as a language of instruction, it is a regular occurrence. She was also a linguistics major.

“The culture of Living Latin is what led me to turn down a full scholarship to USC and move from Los Angeles to Lexington. At UK, I took several classes taught by Dr. Terence Tunberg and Dr. Milena Minkova. Both speak Latin with incredible fluency, and they have made it their mission to teach their students to do the same,” she says. “When we read Cicero’s ‘De Amicitia,’ one of the greatest treatises on friendship ever written, we discussed Cicero’s thoughts in the language that he thought them. Through classes like this, I met an entire community of students and professors who loved Latin just as much as I did. Suddenly, Latin was a language I used to introduce myself to new people, have a conversation over dinner at The Local Taco, or just check in with my friends to see how they were doing. Nowhere but UK could I have glanced at my phone and seen a text message saying, ‘Quid agis?’”

UK’s Living Latin program allowed Sophia Decker to master reading, writing, listening and speaking Latin. After graduation in spring 2019, she began religious life at a Carthusian monastery in France, where the nuns spend six to eight hours a day reciting or singing prayers in Latin or French. About 25% of the texts are in Latin and many change frequently.

“By virtue of her education at UK, she understands all of these texts, as well as the nuns who have been living this life for many years,” Theresa Decker says. “This linguistic proficiency opens the door to spiritual practice, which would otherwise be extremely daunting. The Carthusian order has a more than 900-year history, and all its literature is in Latin until very recently. Sophia can read and understand all of this and can even translate it for the other sisters who have lived this life much longer but don’t have the same proficiency in Latin. She uses the Latin she learned at UK every day, all day, and to do the things that are most important to her. She could live Carthusian religious life even if she hadn’t benefited from UK’s Living Latin program, but she would have far, far more to learn and work on just to get through each day and would progress much more slowly.”

Terrence Tunberg, professor in the Department of Modern and Classical Languages, Literatures and Cultures at UK and a worldwide recognized pioneer in the revival of spoken Latin, founded Conventiculum Latinum (Latin get-together) at UK, the first full-immersion Latin seminar not affiliated with any religion to be founded in North America since World War II. The seminar currently attracts about 80 participants of all ages and backgrounds from six continents every summer.

In 2001, Tunberg, along with his colleague Milena Minkova, professor and another worldwide recognized expert in spoken Latin, began the graduate certificate curriculum at UK.

The UK Institute for Latin Studies has garnered interest from around the world for the uniqueness of the curriculum and for the renowned level of faculty expertise located here.

“UK distinguishes itself from other Latin programs because we teach Latin in whole historical context, which prepares people for other languages,” Tunberg says. “Students speak, write and live in the language.”

Tunberg says that Latin functions as an international language and is considered the mother of all modern romance languages: French, Spanish, Italian and Portuguese. About 60% of all English words derive from Latin. In the vocabulary of sciences and technology, that statistic rises to over 90%.

Other students under the tutelage of Tunberg and Minkova, like Katerina Banks, a senior classics and music major at UK, echo the same sentiment for the classics program as Sophia Decker.

“I’ve been taking Latin since the seventh grade, and I wanted to come to UK because it’s one of the best in the country with the most highly recognized professors of active Latin in the world,” she says. “The culture of the institute is very encouraging. I have observed my professors teach in Latin, make jokes and converse on a variety of topics from ancient texts we are discussing in class to the rules of different sports games. We often have weekly Latin lunches to get together and chat about a variety of topics, including our daily lives and interests.”

Tunberg says the generous gift the Deckers made to the Latin program will be used entirely to support students in the program.

“We know that there are many students who would benefit from academic offerings under the tutelage of these excellent scholars,” Theresa Decker says. “We hope our gift will enable many young minds to deepen their love of Latin and Greek, enrich their understanding of ancient authors, and develop a friendship with the past, which will in turn inform their approach to the future.”

The William Exmew Active Latin Fund was established in honor of UK Professors Dr. Terence Tunberg and Dr. Milena Minkova, from the Department of Modern and Classical Languages, Literatures, and Cultures in the College of Arts and Sciences. To support the students of Active Latin, click here to make a gift.