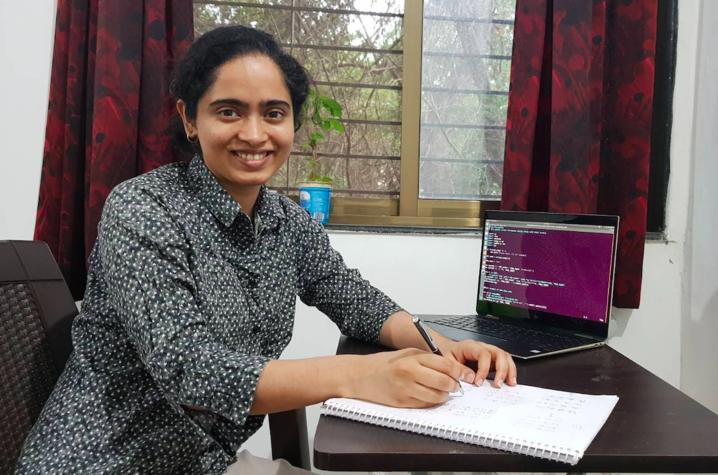 Nisheeta Desai, a 2020 UK graduate, has developed a theory that sheds new light on one of the biggest mysteries in theoretical physics. Her work was recently published in Nature Physics. Photo courtesy of Desai.

LEXINGTON, Ky. (June 10, 2021) — In theoretical physics, a significant outstanding challenge is the mathematical description of the collective motion of electrons in synthetic materials. Despite nearly a century of research, the subtle laws of quantum mechanics in this regime remain poorly understood.

But a University of Kentucky alumna is leading the field in the right direction.

Nisheeta Desai, a 2020 UK graduate and now postdoctoral fellow at the Tata Institute of Fundamental Research, in collaboration with her mentor Ribhu Kaul, in the UK Department of Physics and Astronomy, has developed a theory that sheds new light on these mysteries. Their work, which recently published in Nature Physics, shows how the quantum motion of a synthetic material can be controlled by external magnetic fields. Such magnets may be key to realizing new quantum technologies.

“In our work, we study interactions between a large number of particles and their effect on properties of the material,” Desai said. “We devise models of electronic spins in atoms interacting with each other. The spin is a quantum mechanical property of an electron and interactions between different spins affect the properties of the material on a large scale. For example, when spins in neighboring atoms tend to align parallelly with each other, it gives rise to magnetism.”

Desai and her team, which included experimental groups from Estonia, Princeton and Johns Hopkins University, used a synthetic material called cobalt niobate in their study which exhibits magnetism along with significant quantum effects. By using a modern time-domain spectroscopy experimental technique (which historically played a crucial role in the development of quantum mechanics by allowing the observations of quantized energy levels of atoms) and sophisticated theoretical simulations of quantum matter, the team found that a very simple model explains many of the essential features of the experiment.

“The agreement between results from our computational simulations and those from the experiment is remarkable,” she said.

Progress in the theory of quantum materials could lead to unfathomable new technological revolutions, including the mass production of quantum computers, of which there are only a handful of machines in the world currently.

“The models of interacting spins can be used to explain natural phenomena such as magnetism and destruction of magnetic order due to quantum effects,” Desai said. “Studies of such models can shed light on phases of materials that cannot be explained using purely classical physics.”

Originally from Mumbai, India, Desai joined the graduate program at UK in 2014. During that time, she was awarded the Keith B. MacAdam Graduate Excellence Fellowship, the department’s most prestigious award. In addition to the Nature Physics article, Desai has also published as first author in Physical Review Letters, one of the most prestigious journals in the field of physics, among many other publications.

"Nisheeta did exceptionally well in her career as a Ph.D. student at UK. She has also developed independent collaborations with various scientists across the world during her time here and is well on her way to a successful career as a scientist,” said Kaul. “This research would not have been possible without the exceptional atmosphere in our department. The combination of world-class physicists and a collegial supportive environment is something very special to UK. I feel very lucky to be part of this department."

Desai says her six years at UK contributed greatly to both her personal and professional growth.

“I found the environment in the department to be very pleasant and stimulating,” she said. “The culture in the condensed matter theory group was instrumental in my development as a researcher. I met many wonderful and inspiring people here (including my husband!) and got to work on very interesting problems.”

Through her achievements and success, Kaul and his colleagues consider Desai a role model to the next generation of women Ph.D. students in their department. While women are underrepresented in physics, Desai says she is optimistic about the future.

“When I taught undergraduates at UK as a TA, I saw a clear mental block for the subject, especially among female students,” she said. “It is hard to ignore unconscious biases in society, especially when there are relatively few female role models in physics. Nevertheless, it is impossible to overlook the significant contributions women have made to physics historically despite all the barriers they faced.”

Her advice to women, or any student starting out their careers in physics research: focus on one thing at a time, and do it well.

“It is easy to get discouraged if you try to do something very difficult all at once,” she said. “It is also important to remember that the process of scientific enquiry is a humbling one and it requires you to constantly challenge your biases and assumptions in the face of new evidence. It is a lifelong process of learning that progressively makes you more objective, open minded and rational.”

When it comes to her own career, Desai says she is inspired to know she is a small part of humankind’s noble pursuit of knowledge.

“When I witness the accomplishments of other people in my field, especially my peers, I get motivated to try my best and contribute my bit toward expanding the vast body of knowledge,” she said. “I like to think I am making the world a little better every day in this way.”