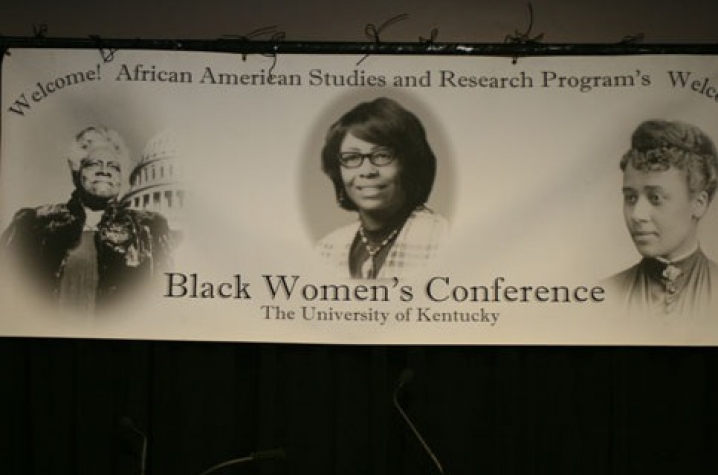 This year's conference, themed "Activism in the 21st Century" will provide an opportunity for participants to look at past, present and future opportunities for community action, through local and regional guests, as well as lectures by Spelman College activist Asha Jennings and former Black Panther Party member and human rights activist Ericka Huggins, a gender and women's studies professor at San Francisco State University and California State University-East Bay.

"We recognize that while we have come a considerable way in terms of issues that plague the African American community, there are still a lot of issues that require us to be involved as social activists," said AASRP director Sonja Feist-Price. "We need to be the change that we hope for."

Jennings, who will lead the conference's student town hall meeting, took a stand against the rapper Nelly when he wanted to conduct a bone marrow drive for his sister, who later died from leukemia. When Nelly refused to meet with the students about his negative depiction of women in his video “Tip Drill,” they refused his request for the bone marrow drive. At the time, Jennings was the president of the Spelman Student Government Association and coordinator of the drive.

"Jennings and her peers were 19 and 20 years old" said Feist-Price. "But their actions brought national attention to a very important issue. Jennings shows how a few women on a college campus that had a concern about the objectification of women in rap videos banded together and refused to look the other way."

For her efforts, the Women's Resource Center to End Domestic Violence awarded Jennings with the Champions for Change Award in 2006. She was also named one of the Amazing 10 Women to Know by Onyx Woman in 2007. Jennings has made appearances on CNN's Paula Zahn Now, the NBC Nightly News and the 2007 documentary, "Beyond Beats and Rhymes: A Study of Masculinity in Hip Hop."

Huggins, the conference keynote speaker, is a former Black Panther Party member, political prisoner and human rights activist. She has spent the last 25 years lecturing throughout the United States about human rights restoration, whole child education and the role of spiritual practice in sustaining activism and promotion social change.

Other conference speakers include Melynda Price, the Robert E. Harding, Jr. associate professor of Law in the UK College of Law and William Turner, the distinguished professor of Appalachian Studies and Regional Ambassador at Berea College.

Price received the 2007 Best Dissertation Award from the Race, Ethnicity and Politics section of the American Political Science Association. Her current research focuses on the politics of punishment and the role of law in the politics of race and ethnicity in the United States and its borders.

"What I love about Melynda is that she talks about igniting the activist in all of us," said Feist-Price. "Sometimes we fail to realize that a movement begins with one person, and we all have a responsibility to play a part in making society a better place for present and future generations.”

Turner was the first to combine African-American and Appalachian studies and published a book titled, "Blacks in Appalachia." He has also held positions at numerous Kentucky universities, including UK.

In September 2007, Turner was inducted into the Kentucky Civil Rights Hall of Fame. He has received multiple honors including the Appalachian Studies Association's Cratis D. Williams/James S. Brown Service Award in 2009, the Christian Appalachian Project's Citizen of the Year award in 1994 and Kentucky's Dr. Martin Luther King Citizen's Award in 2007. He was also inducted as a Notre Dame Black Exemplar in 2006.

Currently, Turner serves on the board of directors for the Kentucky National Lands Trust, the New Opportunity School for Women and the Christian Appalachian Project. He has also been recommended to President Obama for appointment to the Appalachian Regional Commission.

The full 2011 Black Women's Conference schedule is as follows:

Village Experience: A panel will discuss "Civil Rights—Issues of Yesterday, Today and Tomorrow."

Details: Lecture and lunch from 11 a.m. to 1:30 p.m. at the Lyric Theatre and Cultural Arts Center.

Student Town Hall Meeting: Guest speaker Asha Jennings will lead a seminar titled, "If Not Me, then Who?"

Registration begins at 9 a.m. in the Small Ballroom on the 3rd floor of the UK Student Center.

Anna J. Cooper address: Dr. Melynda Price, assistant professor of law at the UK College of Law, will present, "Ready for the Journey: Some Thought on Living an Activist Life."

Mary McLeod Bethune luncheon and lecture: Keynote speaker Ericka Huggins will present, "And, What About the Children?"

Details: Noon to 1:30 p.m. in the Small Ballroom on the 3rd floor of the UK Student Center.

The Black Women's Conference began in the spring of 1995 in observance of Women's History Month and in an effort to recognize, highlight and examine issues central to the lives of black women, including their historical and contemporary roles in the black community.

Each year the conference focuses on a theme relevant to the physical and mental well-being of black women in an effort to offer empowering information that can be used on a daily basis.

The conference is open to UK students, staff and faculty, as well as the Lexington community.

"Be a part of the solution," said Feist-Price. "This year, we are empowering activism and change. Everyone can do something."