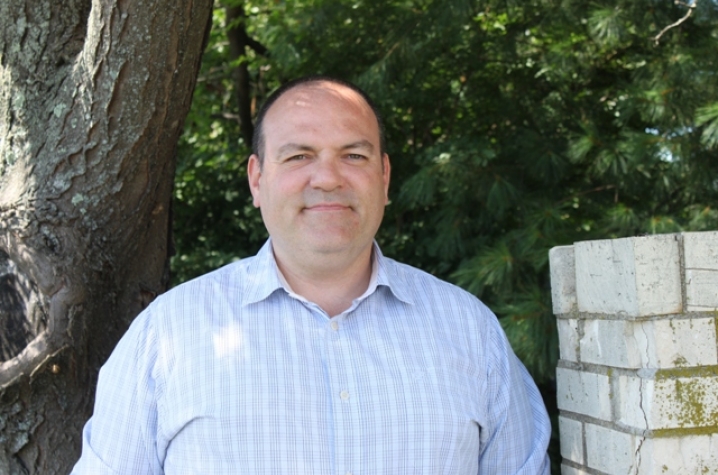 LEXINGTON, Ky. (Aug. 24, 2010) − London-based journalist Mark Doyle has studied American government for years as an editor for British news magazine The Economist. But a current trip through smaller-town America on a Transatlantic Media Network fellowship is taking him to areas many international journalists never venture. One of those places is Lexington.

Doyle stayed in Lexington for two weeks recently as he covered congressional races in Kentucky, Indiana and Ohio as part of his three-month trip in America. He is covering a total of 10 races in nine states from Pennsylvania to Louisiana.

The Transatlantic Media Network, based at the Center for Strategic and International Studies in Washington, DC, brings European journalists to the United States on fellowships to promote greater understanding between journalists in both regions. Doyle says the program allows European journalists to go beyond usual American destinations like Washington, D.C., New York City and Los Angeles. It gives journalists a chance to learn first-hand about the diversity of United States politics and culture, so they can better report on American issues when they return to Europe.

Like other fellows in the program, Doyle is based at university schools of journalism along the way. The University of Kentucky's School of Journalism and Telecommunications hosted Doyle during his stay in Lexington. He is the third journalist UK has hosted this year as part of the media network.

"We help with setting up a schedule," said Beth Barnes, the school's director. "They tell us their interests and we help them make contacts."

One of those contacts paired Doyle with UK's Al Cross, a long-time political reporter and now director of the Institute for Rural Journalism and Community Issues. Cross shared insights with Doyle about Kentucky's ongoing Senate race. UK has paired other European journalists with area media as well.

"The Lexington media community has always been very willing to do this hosting," said Barnes. "I think that's why the Transatlantic Media Network has come back to us. It shows that they're getting good feedback from the journalists."

Barnes jumped at the chance in January to host UK's first Transatlantic Media Fellow, German journalist Ann-Kathrin Eckhardt. The opportunity came via Carol Pardun, director of the University of South Carolina's School of Journalism and Mass Communications, which was then hosting Eckhardt. The journalist came to UK, followed in June by Greek broadcast journalist Christina Siganidou.

"One of the things we're looking at is how we can broaden our students' international perspective," said Barnes, who serves on UK's International Advisory Council. "Of course it's great to have students study abroad and to host students from other countries, but you can learn a lot just by talking to somebody whose background is different from yours. When I first heard about this program, that was the real appeal."

"It seems over the last 10 years, people take much more strident views politically - much more ideological," he said. "There seems to be less give and take."

Doyle noted that some observers would argue this is all part of a vibrant American democracy. But some of America's own political journalists might disagree.

"If you speak to old hands in Washington, old journalists, they would say the political atmosphere has completely changed," Doyle said. "There used to be working together, give and take. Now the parties don't even want to talk to each other. It's a winner-take-all situation. That's why it's so hard to get things done."

Doyle is also exploring American culture beyond politics. While covering a Senate race in Morgantown, West Virginia, he took a trip to the Augusta Heritage Center in Elkins, where traditional Appalachian music, dance and culture are taught. Doyle, who is of Irish and Scottish descent, appreciated how this culture is being kept alive. He wrote a piece for The Economist about his experience.

"People were dancing on the porch outside, and you could hear the fiddle inside," he said. "You can hear the Irish influence."

From Kentucky, Doyle headed to Tennessee. He'll make stops in Tupelo and Jackson, Mississippi before finishing his trip in New Orleans, Louisiana. Looking back on his time in Kentucky, he saw shades of his own British homeland, as well as aspects of much larger American cities.

"My overall impression of Kentucky was of a state that is tugged halfway between the South (Frankfort) and the mid-west (Louisville), not just geographically, but spiritually as well," he said. "The drive around Lexington with its green pastures and rolling hills, reminded me of England. The drive in Lexington however, sitting in traffic for half an hour to get to Kroger, for example, was more reminiscent of New York."