Video Produced by UK Public Relations & Marketing. To view captions for this video, push play and click on the CC icon in the bottom right hand corner of the screen. If using a mobile device, click on the "thought bubble" in the same area.

LEXINGTON, Ky. (May 25, 2017) — When Thomas Kubeck returned home from the Vietnam War, he never received a hero's welcome. He landed back in the states on a stretcher, not to a crowd of cheering people or handshakes of gratitude.

This past Saturday, Kubeck, a former staff sergeant in the U.S. Army, finally received the celebration he deserved. He and nearly 70 other veterans participated in the University of Kentucky Honor Flight, an all-expense-paid trip to Washington, D.C., to visit memorials and a daylong commemoration of their service. Before sunrise, they arrived at Blue Grass Airport and were welcomed by patriotic colors and a massive American flag that hung between two Lexington Fire Department fire trucks at the entrance.

"I know I speak for everyone here when I say thank you: not only for what your service has made possible, but also for what your legacy will continue to mean for countless people at home and around the world," said UK President Eli Capilouto, who participated in the flight, at the morning ceremony.

As they left to board the plane, family members, friends, UK faculty, staff and students, other travelers, and community members lined up in the airport lobby forming a red, white and blue walkway of applause and appreciation. It was an emotional sight for many as the veterans looked around in awe, smiles accompanied with tears.

The veterans served in World War II, the Korean War and the Vietnam War; many were UK alumni, retirees and family members of current UK faculty and staff. One veteran, 94-year-old John Reed Lowry of Dry Ridge, Kentucky, served in all three wars. His son, John Clinton Lowry, a Vietnam veteran, also participated in the flight.

The celebration did not end at their departure from Lexington. Upon arriving at Ronald Reagan Washington National Airport, the flight was met with people of all ages cheering, waving flags and reaching to shake the hands of heroes.

"When we were getting off the airplane in Washington, and we went walking through that line, there was a young man with his parents, he couldn't have been more than 6 years old," Kubeck said.

The little boy stuck his small hand out toward the veteran. After the handshake, Kubeck reached up and grabbed a pin from his hat.

"I gave it to him just for appreciation for what he did to come out there," he said. "I could never expect anything like this. This just makes my life."

World War II veterans, most in their nineties, rose from their wheelchairs to walk around the World War II Memorial on their own two feet. A Korean War veteran received hugs of thanks from Korean tourists at the Korean War Veterans Memorial. A Vietnam veteran, pushed in her wheelchair by her daughter, was finally able to see the Women In Military Service For America Memorial. At Arlington National Cemetery, the four oldest veterans on the flight participated in a wreath laying ceremony at the Tomb of the Unknown Soldier.

These are just a few of the scenes from an unforgettable day.

As the veterans continued to be recognized for their bravery and service, they also paid tribute to those they lost, including service members who saved their lives.

At the Vietnam Veterans Memorial, Kubeck found the name of his platoon leader, Russell Steinham. He recounted the night he was killed — Feb. 1, 1970 — by a grenade. Kubeck said Steinham had pushed him out of the way, falling on the grenade and passing away later that night.

"Out of 17 of us that went in, three of us walked out," he said. "I dragged his body out with several other people and got ahold of our headquarters to come out and get us until we can get relief. If it wasn't for that man, I wouldn't be here."

Kubeck's is one of numerous stories told that day. Sons, daughters, spouses, friends and UK President Eli Capilouto, who escorted veterans on the flight, gained just a bit of insight into the sacrifices made by these men and women.

While parts of the day were somber, other parts were celebratory. UK also had a surprise in store: when veterans arrived at the Lincoln Memorial, the steps were filled with D.C.-area UK alumni in their blue and white, greeting and taking photos with the veterans. One former student at the memorial tweeted proudly, "Loved welcoming my grandpa & favorite ‪#veteran to DC this weekend on the ‪#UKHonorFlight to see the memorials built in his honor. #WeAreKY"

"The C-A-T-S cheer on the steps of the Lincoln Memorial! That is when it really hit home for me that we were making history," said UK Veterans Resource Center Director Tony Dotson, who participated in the flight. "The first university in the country to sponsor an Honor Flight. These veterans were being honored by an institution of higher learning that understands that education is a freedom, and that freedom is provided by those Americans willing to defend it."

At 9 p.m., around 700 people had packed the Blue Grass Airport, ready to cheer, hug and wave their flags. The weather had other plans though and the flight was diverted to Charlotte, North Carolina, returning much later. To the veterans' surprise, around 150-200 people were still there at 2:30 a.m., under a large "WELCOME HOME, VETERANS" banner. Kubeck entered the lobby and kissed the ground, finally receiving the homecoming he dreamed of for so long. 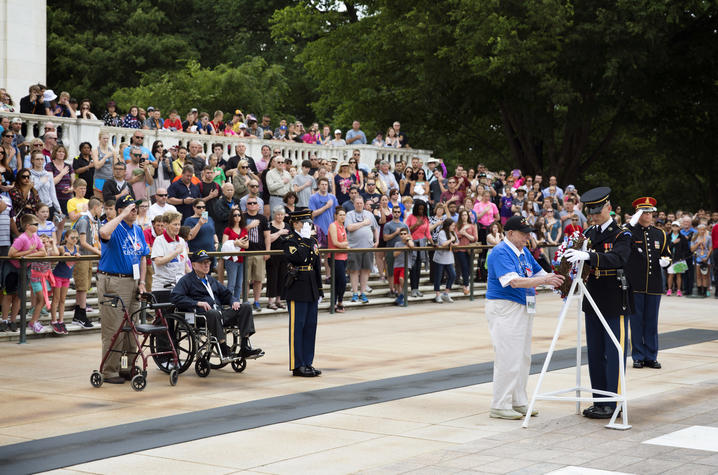 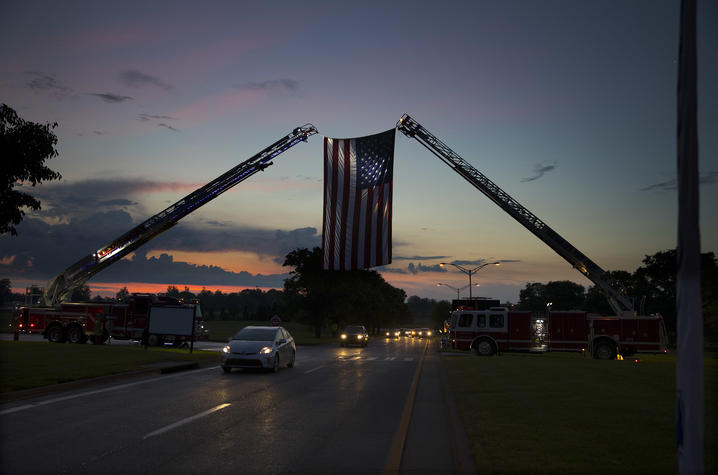 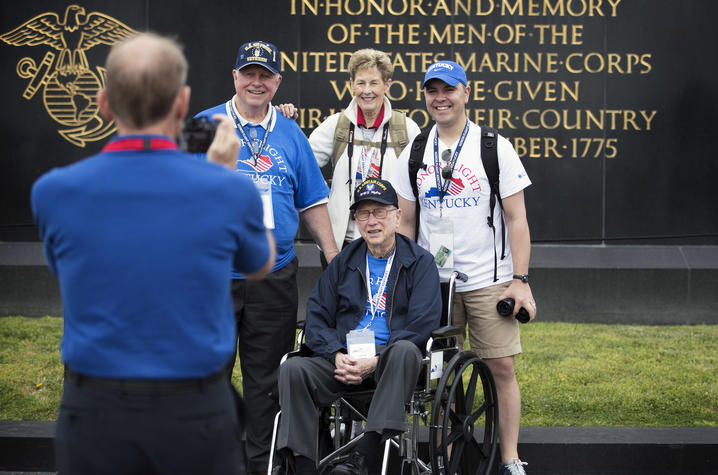 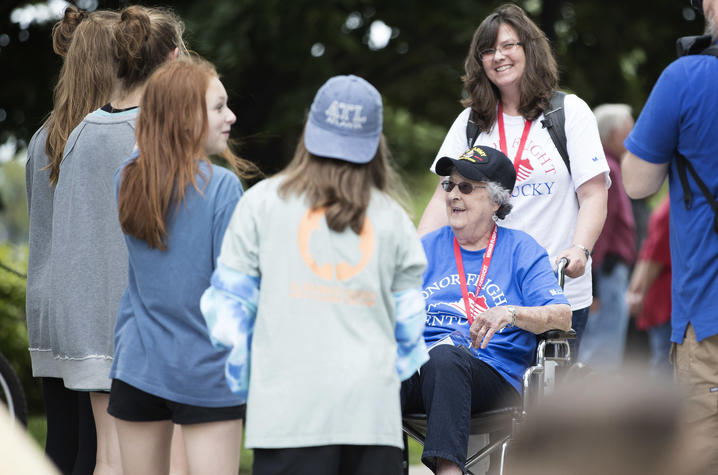 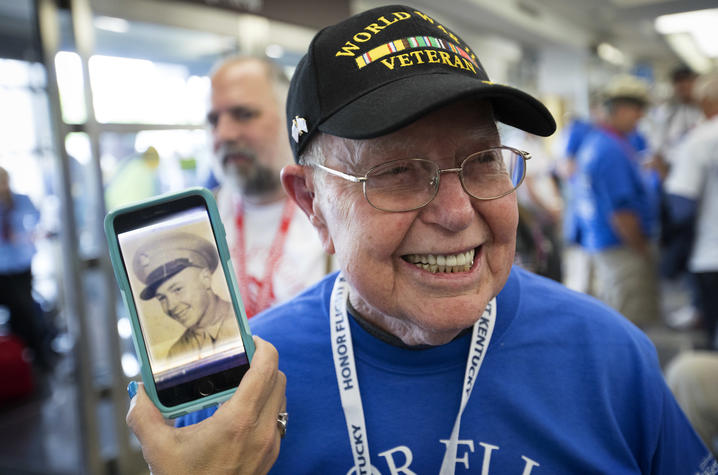 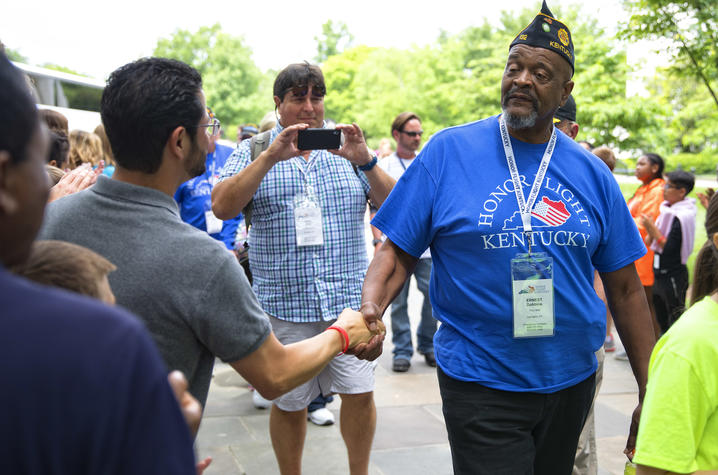 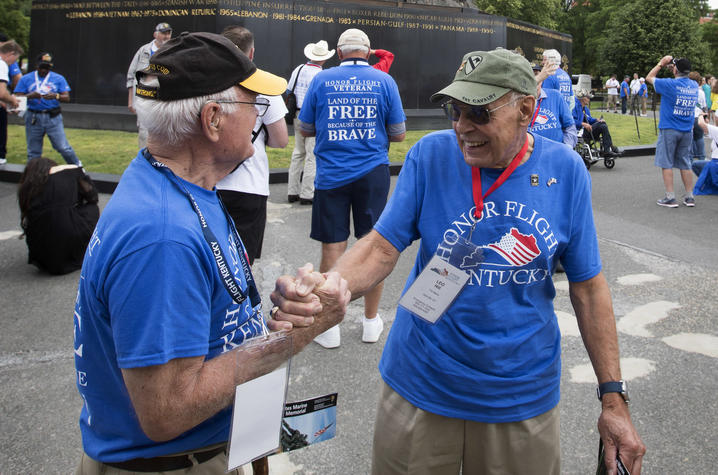 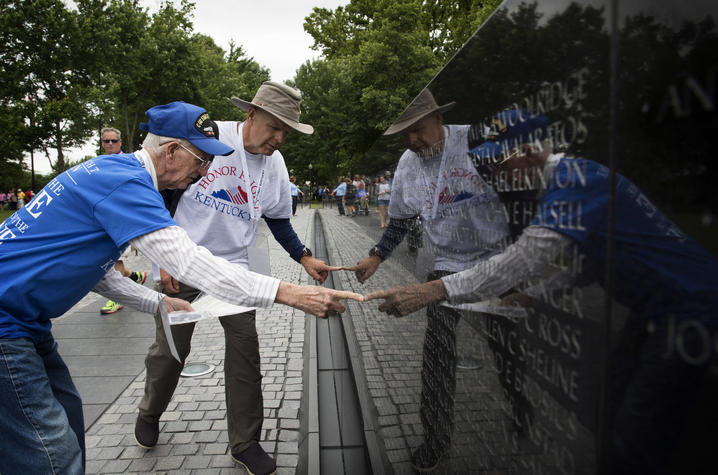 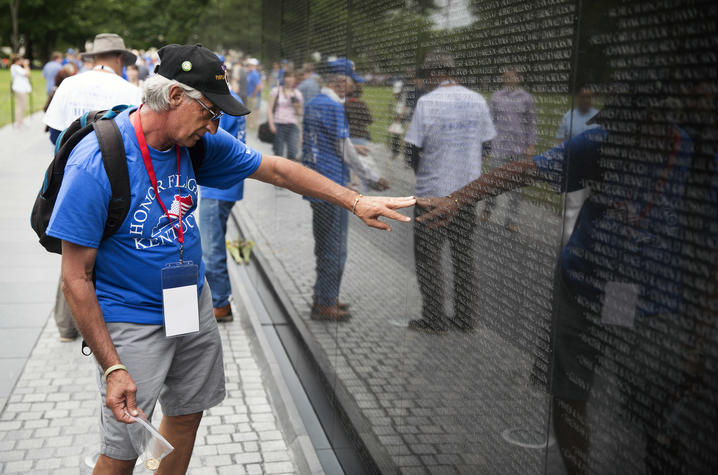 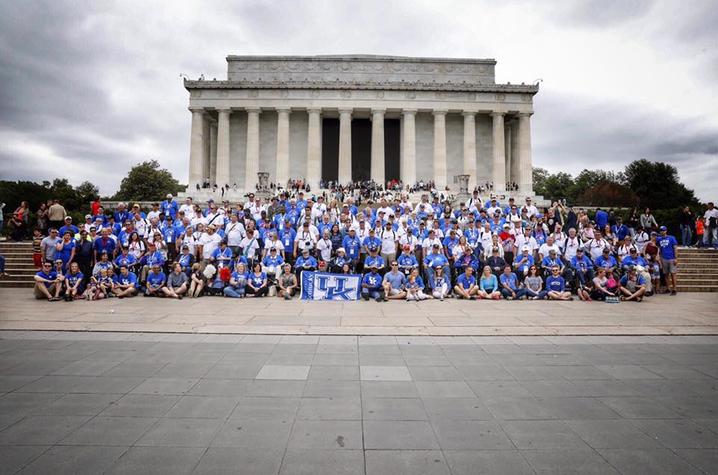