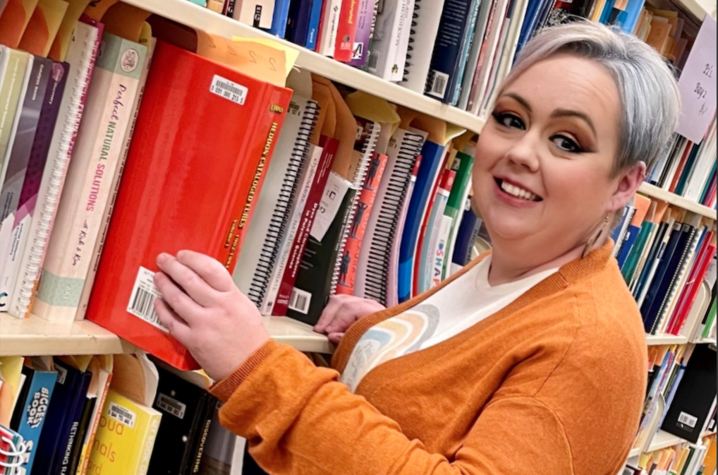 LEXINGTON, Ky. (Aug. 13, 2021) — A little girl from Kentucky who went to the local library housed in a jail cell has now become a section head at the Library of Congress (LC), turning her getaway into a realized dream job.

Jasmyne Lewis-Combs, who earned her master’s degree in library science in 2014 from the School of Information Science (SIS) in the University of Kentucky’s College of Communication and Information, took her love of local libraries and transformed it into a career in the United States’ national library, one of the largest libraries in the world.

“It took me a long time to get here, but it’s a good place to be now. You don’t leave LC,” Lewis-Combs said. “My dream job wanted me. I didn’t just want them. Some days I still can’t believe it.”

Lewis-Combs’ library career started at the end of a nearly decade-long career teaching special education. Due to Great Recession budget cuts, she was let go from her school district. This left her scrambling for months trying to find a job, none of which stuck, until one opened up the door to further her education.

As a Kentucky girl, Lewis-Combs had always wanted to attend UK, but after getting her bachelor’s degree from Morehead State University, a master’s degree from Georgetown College and teaching certificate from West Virginia University, it was a forgotten dream. Thankfully, her short stint as a social worker finally gave her the opportunity as one of the job requirements was to apply for graduate school at UK. When she got her acceptance letter two months after quitting the job, her mother suggested she go into library science like she had dreamed of as a child.

“As I fell out of love with teaching because of the bureaucracy involved, I fell even more in love with the library because I could teach what I wanted when I wanted to who I wanted, and it was like this perfect environment for me,” Lewis-Combs said. “I had this love of library anyway because it was always my escape. If I had something going on that I wanted to run from, well that’s where you found me. Or if I had any free time, my nose was in a book.”

Though she had an affinity for libraries, she did not know all the work it took to be a librarian until she started her program at UK. There, she learned the philosophy, logistics and science behind libraries and how they operate. It was also at UK that she discovered her dream job through an internship program.

The UK SIS Alternative Spring Break program offers library science students career-enhancing experience by working in the country’s leading national libraries and archives. While participating in the program, Lewis-Combs spent time interning in the LC. For the next 10 years, she gained progressive experience to work toward landing a job in the national library.

Before she even graduated from UK, Lewis-Combs was already serving as a library director for the Rocky J. Adkins Public Library in Sandy Hook, Kentucky. Her focus there was to assist the community with what she observed as their main needs: free child care and meals during the summer. With a small budget from the Kentucky Department for Libraries and Archives, Lewis-Combs ran an eight-week science-based summer reading program from 8 a.m. to 5 p.m. for 50 school-aged children. She also ran a two-week senior citizen computer class, teaching the elderly how to shop online, create an email address and use Facebook.

“Everybody thinks books when they think library, but that’s not the case anymore. It’s not the books — it’s the people. Our libraries are the center of our community. Libraries are changing. It’s no longer older ladies with buns and glasses shushing patrons while carrying stacks of books. Our libraries are living, breathing entities that are the hubs of everyday life,” Lewis-Combs said. “All of these resources are available through your library, and all of the social aspects that we need as humans to be well-rounded people are available there.”

Throughout the years, Lewis-Combs was also a correctional librarian in the Little Sandy Correctional Complex where she ran reading programs for inmates, a supervisor in the West Virginia Library Commission Division of Special Services, where she taught others skills to teach Braille and provided public library services to the visually impaired and blind through the LC’s National Library Service and an educational technology teacher/ librarian at Kentucky Christian University.

Nine months into the KCU job, Lewis-Combs got a call from the LC about an application she had submitted before even applying to the university. After an interview she thought she bombed, two months of waiting for a call back and a 72-page background check, she was well on her way to becoming the section head for the Science, Medicine and Agriculture Section of the LC.

“It’s an amazing feeling to be there and to be chosen for the job that you dreamed about and sought after for almost 10 years,” Lewis-Combs said. “It’s been the road meant to be traveled. Really bad circumstances turned into something really wonderful.”

As a section head, Lewis-Combs supervises a team of cataloguers, two librarians and three technicians, who complete the Cataloguing in Publication (CIP) records for books in pre-publication and catalogue published books sent from the United States Copyright Office. Though the job is not public-facing, Lewis-Combs said she has a large enough staff and ample program opportunities to satisfy her social needs as a librarian.

While her library career started from a love of books, it quickly blossomed into a love of helping others. She dreams of one day heading the NLS to help solve social inequalities like she had as a librarian in West Virginia and assisting with the Alternative Spring Break program to help set career goals for other future librarians.

“So many times, our librarians get discounted as, ‘Oh, they’re just a librarian.’ But they’re not. They’re the keys to unlocking all this knowledge,” Lewis-Combs said. “They can be the catalyst for change in our communities for the better.”