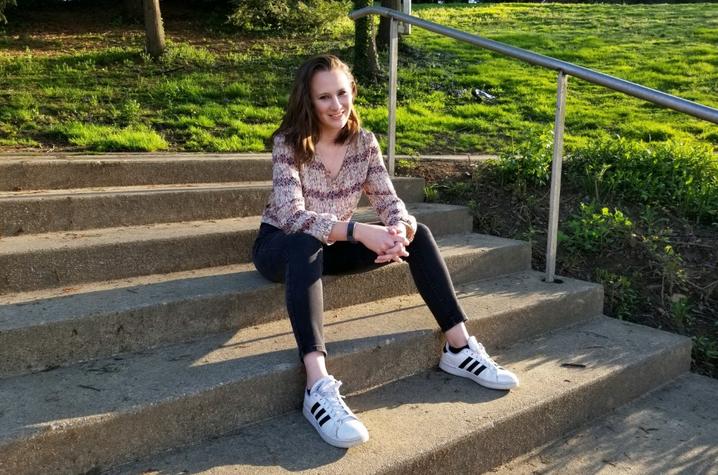 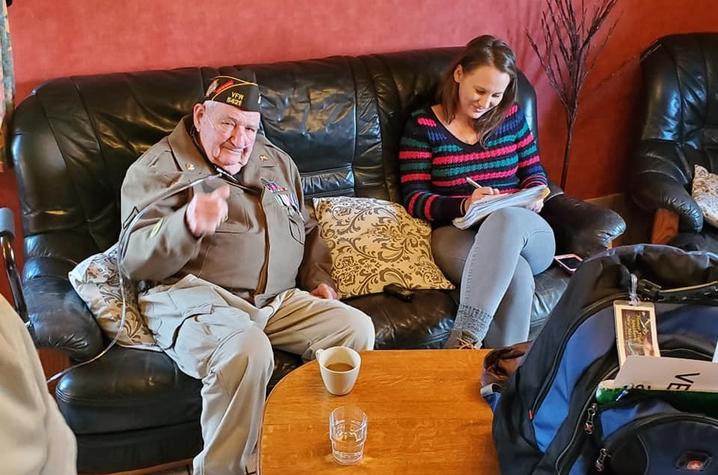 LEXINGTON, Ky. (June 28, 2021) — To go from reading the news to writing the news, one University of Kentucky College of Communication and Information alumna channeled her love for writing to land a spot at Kentucky’s largest newspaper and become a Pulitzer Prize finalist.

It was during a three-week power outage brought on from a bad 2009 winter storm that Sarah Ladd, a 2019 journalism graduate, wondered how the families around her were doing. This intrigue in human interest stories blossomed into an affinity for journalism that carried her through college and into her career field.

Ladd grew up in a small, Western Kentucky town feeling isolated from the rest of the state — that is, except for a UK College of Agriculture, Food and Environment extension office right outside her town. Seeing that UK sign made her feel like the university cared, leading her to transfer there after completing her associate degree at West Kentucky Community and Technical College.

However, before she had officially stepped foot on UK’s campus as a student, she was already active in the Kentucky Kernel. The student newspaper would make up much of her college experience as it acted as an “oasis” for Ladd and what she called “a safe place for growth, for friendships, for learning.”

“It can’t ever hurt to be surrounded by like-minded people,” Ladd said. “There was a sense of a sisterhood, and I say sisterhood because there were so many powerful, young women running the Kernel when I was there — and there still is.”

During her time with the Kernel, she served as a news reporter and the opinions editor. Her reporting in these roles earned her and the organization multiple accolades, among them an Associated Collegiate Press Pacemaker, College Media Association Pinnacle Awards and awards from the Kentucky Press Association.

Kakie Urch, associate professor in the School of Journalism and Media and Ladd’s biggest mentor from UK, said, “Sarah Ladd embodies the excellence that students can demonstrate in all areas of the major: academic work, lab and studio work, student media work … Sarah brings 100% to the table. It's a joy and a pleasure as a professor to spread the tablecloth for her and ring the dinner bell.”

It was at the 2019 Kentucky Press Association Annual Convention that Urch introduced Ladd to Kristina Goetz, then-narrative editor at the Courier-Journal. Conquering her introversion, Ladd networked her way into a guided tour of the news organization and a short interview with then-editor Rick Green. From that conversation, she secured a post-graduation internship as a breaking news reporter.

Despite her seemingly temporary position, Ladd didn’t let that hinder her from acting as a full-time reporter. She got a diversity of reporting experience, from covering everyday crime to bigger enterprise stories. Not once did she feel held back, and she said her time with CI helped prepare her for that.

A mere month into the internship, Ladd was called into a meeting with Green and some of her other mentors. She was told to take notes as her boss asked everyone else in the room what qualities make a good reporter. In the end, she was told these were all qualities she possessed and that she would be a full-time reporter in three months’ time.

“I have been recruiting interns for nearly 25 years, and it’s incredibly rare to know almost immediately that someone is going to be a high-achiever and land an immediate spot on the reporting staff. Sarah Ladd was one of the exceptions,” Green said. “I knew pretty quickly she was an exceptional journalist. Her skills, the willingness to tackle whatever story we gave her and make it special, the quality of ideas she pitched to me and other editors — all added up to someone I knew deserved a full-time spot on the Courier-Journal staff.”

Ladd continued to work as a breaking news reporter for many months before transferring to a focused beat. In December of 2019, less than a year on the job, she requested and was sent to cover the 75th anniversary of the Battle of the Bulge in Belgium. During the latter half of 2020, she reported on higher education before landing in her current role of COVID-19 coverage.

In 2020, Ladd was also part of the staffwide effort to cover the police killing of Breonna Taylor and the more than 180 days of protests it sparked in Louisville. The coverage by Ladd and her colleagues earned the paper 2021 Pulitzer Prize finalist status in the breaking news and public service categories.

"Working in a Pulitzer Prize-winning newsroom has always been a source of pride and a truly humbling experience for me. Being part of a finalist team made it that much more real and humbling,” Ladd said. “But I do think it's important to remember why we were finalists this year. It was for covering the death of a young woman and the pain of a city. I am proud that the CJ was here covering it, though, and I'm grateful to everyone who shared their stories and emotions with reporters. I know we'll never stop digging for truth and answers for our city, and that's something to be proud of and excited about."

When reflecting on the catalyst of her journey with the Courier-Journal, Ladd advises other journalists to network. She said while networking is hard for introverts like her, she wouldn’t have the amazing job she has today if she hadn’t asked a stranger for advice. Now that stranger, Goetz, is a good friend and a big mentor who cheers on Ladd’s success.

“Sarah is an extraordinary writer and reporter. She's as kind as she is ambitious,” Goetz said. “I expect great things from her in her career. But as far as I'm concerned, she's already a star.”