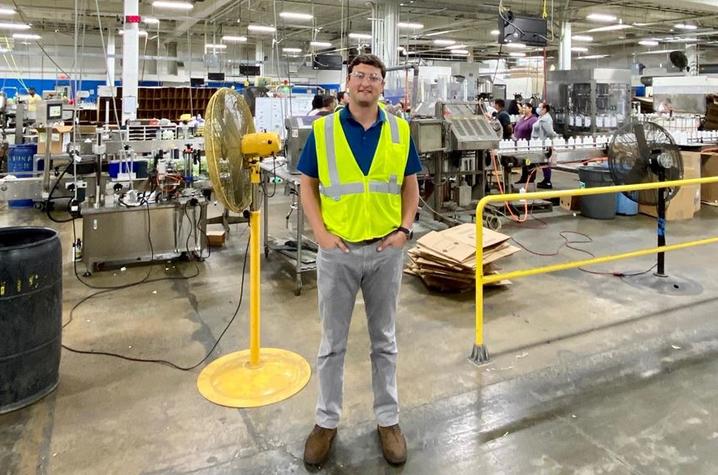 Will Fidler is president and co-owner of RGA Enterprises, a Charlotte-based company that manufactures cleaning products and uses a deep-cleaning technology that keeps essential facilities open during this vital time. Photo provided by UK Athletics.

LEXINGTON, Ky. (May 7, 2020) — The moment from bowl week was routine: A former player who lives in the area of the bowl game visits practice, reunites with old acquaintances, revives memories from his days on the field.

Such was the case last December when Kentucky quarterback Will Fidler, on an unseasonably warm afternoon in Charlotte, North Carolina, dropped by the high school where the Wildcats prepared for the Belk Bowl. Fidler introduced wife Marissa and family to longtime staffers from his time at UK, such as administrator Marc Hill, equipment manager Tom Kalinowski and athletic trainer Gabe Amponsah, while reliving a practice session that he had been doing just a decade before.

Little did Fidler realize that less than three months later, the calm of that balmy afternoon would dissolve into the battle of a global pandemic, and he would be deeply involved in the fight.

Fidler is president and co-owner of RGA Enterprises, a Charlotte-based company that manufactures cleaning products and uses a deep-cleaning technology that keeps essential facilities open and operating during this vital time.

You have undoubtedly seen, and more than likely used, Fidler's products. His company makes national brands of cleaners, sold at Kroger, Walmart, Family Dollar and other retail outlets, and also has its own line of cleaner, Magic Power.

It wasn't long ago that Fidler sensed that life was about to change, both for him and the country.

"We saw a dramatic increase in customer demand, beginning in March when they started to talk about the coronavirus and community spread in the United States," Fidler said. "It really, really increased in the middle of March when they shut down schools and the major sporting events and things of that nature."

"It feels like we're working 28 hours a day, eight days a week, and the drumbeat we are all marching to is playing at a much faster tempo," Fidler said. "The amount of emails and phone calls and questions, like, 'Can we do this?' or 'Can we do that?' has gone through the roof. Everybody is trying to react all at the same time to meet this increased demand from consumers."

The dramatic increase in production is funneled to the public as soon as it is manufactured. Fidler and his employees understand the urgency, and importance, of what they're doing.

"There was definitely a sense of fear in our workforce, but we all got together and talked about how we have a much greater sense of responsibility, as we are producing essential products," said Fidler, who has implemented a number of safeguards to keep his employees safe.

"Products that fight this virus and protect families are now front and center of what people need," he continued. "It is our responsibility to stay operating to get these products into the hands of the American public.

"I am very proud of how our team has risen to the occasion and how we have so many people going above and beyond."

In addition to cleaning products, Fidler has expanded with a service division. His company represents Pure Spaces, which uses a proprietary technology to sanitize factories, warehouses and offices, keeping them safe for workers. Along with Charlotte, the service has been expanded throughout the Carolinas into Lexington, Louisville and Henderson, Kentucky, and into Michigan.

Fidler has been president and co-owner since 2016, when he and his father purchased RGA. Prior to that, he worked in chemical sales in the Charlotte area, so he was familiar with the company when it became available.

Fidler played at UK from 2006-09, with the highlight of his career coming during his senior season. Following a season-ending injury to starting quarterback Mike Hartline, the next week saw the Wildcats travel to Auburn University — hardly a place to break a three-game losing streak.

Along with Randall Cobb and Morgan Newton, Fidler saw extensive duty behind center on that chilly evening on the Plains. Trailing 14-7 midway through the fourth quarter, on third down at the Auburn 2, Fidler's number was called on a designed quarterback run. He plowed through three Tiger tacklers to muscle his way into the end zone and tie the game. On the next possession, Cobb scored to post a 21-14 triumph that turned around a season that eventually sent the Wildcats to the Music City Bowl.

"Yes, that is definitely the highlight of my career," Fidler recalls. "It was certainly a committee effort and it was a lot of fun, especially to look back and see the success Randall Cobb has had in his professional career and say 'Hey I was part of the team that came back in the second half and beat Auburn, the first time that had been done in 43 years.' That was a lot of fun and something I'm certainly proud of."​

Fidler went to bowl games all four seasons at UK and Wildcat football remains near and dear to his heart.

"I still stay in touch with a number of guys," Fidler said. "I've seen Andre' Woodson a couple of times over the last few years. I still talk to Dicky Lyons a lot. I'm really good friends with Ross Bogue. Michael Aitchison (now a minister) was the officiant at our wedding. In my time at UK I made a lot of relationships that I still value today, lifelong friends.

"Also, as things with Kentucky football have materialized like they have, it makes you very, very proud to be a former Wildcat. I love what they are doing with the program now. Actually, I shouldn't call it 'former' Wildcat. Once a Wildcat, always a Wildcat!"

Along with attending the Belk Bowl, Fidler enjoyed a return to Lexington in 2017 for the reunion of Rich Brooks' bowl teams and looks forward to another trip to Kroger Field. First, however, is his role in helping fight the pandemic.

"Frankly, I wake up every single morning and count my lucky stars that we are an essential business and have the opportunity to do this," Fidler said. "There are so many people and companies out there that are struggling right now, and it definitely puts things in perspective."