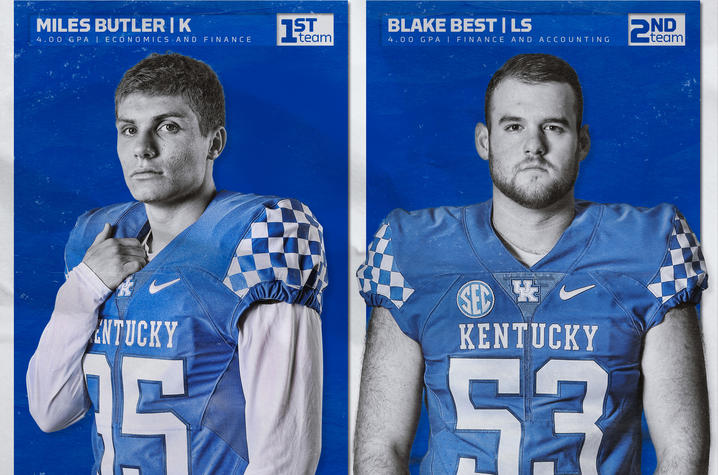 Butler, a senior from Paducah, Kentucky, graduated Friday with a double major in finance and accounting. He is the team’s second-leading scorer this season with 52 points, making five field goals and all 37 of his extra-point tries. His season was highlighted on Senior Day when he made 2-of-2 field goals in the win over Middle Tennessee State University, including a clutch 32-yarder with four minutes remaining in the game that gave the Wildcats a two-score lead.

Best, a junior from Duluth, Georgia, graduated Friday with a double major in economics and finance. He has been a three-year starter as the long snapper for field goals and extra points, playing an important role in Butler’s success this season and the record-setting career of former kicker Austin MacGinnis.

In addition to this season’s Academic All-America honors, Butler and Best have been regulars on the Southeastern Conference (SEC) Academic Honor Roll and the UK Dean’s List.

This year marks the fifth time in school history that UK has had at least two members on the CoSIDA Academic All-America team, and the first time since 2015, when punter Landon Foster (first team) and offensive tackle Jordan Swindle (second team) made the squad.

Butler and Best have helped Kentucky to a 9-3 record this season, UK’s best regular-season record in 41 years, and UK’s 5-3 SEC record is the team’s first winning league mark in 41 years. The Wildcats conclude the season Jan. 1 vs. Penn State in the VRBO Citrus Bowl.