LEXINGTON, Ky. (Oct. 12, 2011) − Before becoming the University of Kentucky's 12th president, Eli I. Capilouto made it clear in his town hall meetings on campus that he believed in faculty and staff governance. But this sentiment, has not always been embraced by the university's presidents. UK's Faculty Senate did not make its appearance on campus until the third president, Frank L. McVey, took office and made it a priority of his administration.

"President Patterson was such an autocrat that the faculty had no rights; he was a dictator basically," says Terry Birdwhistell, dean of UK Libraries, who served the university first as an oral historian and an archivist. "Barker was a little easier on them, but the faculty still had no power. It's President McVey who comes in and really works to establish a faculty culture here."

Soon after his installation in the summer of 1918, President McVey began tireless work modernizing the university. From the very beginning, the new president worked to attract better faculty to the institution and retain them. A noted economic scholar himself, McVey began hiring nationally recognized specialists and increased professors' salaries.

During that first fall semester McVey also began work on a constitution for the university. The most important provision of the new document would create a Faculty Senate. As part of this provision, McVey gave the body control over the curriculum as well as "matters involving general University policy." The constitution also established sabbatical leave for faculty research.

After McVey's retirement in 1940, the Faculty Senate would undergo a major organizational change when the Board of Trustees decided to rewrite the constitution and replace the Faculty Senate with a body called the University Faculty, composed of administrators. As a result of this change the university faculty lost control of elements of the curriculum, as well as the right to recommend degree candidates. The modifications to the constitution eventually led to discord on campus. The old senate body, the Kentucky Kernel and the Student Government Association all voiced dissent and asked the board to reconsider the change to no avail. And in the midst of all this conflict, the board elected Herman L. Donovan the next president of UK.

Like his predecessors, Donovan also fought to extend faculty rights and improve salaries for his professors. The abolition of the Faculty Senate, established by McVey, and its replacement by a body of administrative staff was a major political blow to the new president.

Donovan years later would say that had he known of the abolition of the Faculty Senate, he would not have accepted the presidency. He learned of the changes in faculty governance the first day in office at UK and would set out to rectify the situation. Within two years, a new body composed of elected faculty members, a precursor to what we call the University Senate, was established under the name the University Faculty. The new body would participate in the development of educational policy and also nominate degree candidates. In addition, the state took the nomination of degree candidates into consideration and made it state law that granting of degrees can only be made "upon the recommendation of the faculty of the University."

Donovan would consider this a pivotal moment saying it was "one of the outstanding accomplishments of my years as President of the University."

In addition to stabilizing the situation surrounding the University Faculty, Donovan also navigated conflict involving faculty payroll. A cap on professors' salaries — at $5,000 per year — by Kentucky's legislature had resulted in the loss of talented faculty to higher paying jobs. In response to this problem, Donovan recruited younger professors, who could be hired at lower rates and he offered salary subsidies through the Keeneland Foundation to increase professorial pay. He also lobbied the legislature for pay raises and additional funds were allocated to increase faculty salaries in 1948. Donovan, the fourth president of the university, would go on to retire from the presidency in 1956.

An advocate of the faculty, President John W. Oswald made it clear how important their role was on his inauguration day in 1964. "First, we must realize that, when pared to its core, the University is its faculty," said the new president.

As UK approached its 100th anniversary, Oswald would work to create an environment that he hoped would continue to attract and retain superior scholars. In this vein, he expanded the role of the University Faculty by changing its name to University Faculty Senate. The change was important because it gave faculty a larger role in determining "broad academic policies." Reenergized by this new name and bigger role, the body adopted a new academic plan adding a general studies requirement for baccalaureate degrees.

Oswald would also go on to raise salary levels during his administration and the senior faculty increased by approximately 200. A funded retirement system with procedures on appointment, promotion, tenure and merit also helped making UK jobs more competitive and summer teaching fellowships were offered to provide incentives for younger faculty members. Oswald, UK's sixth president, resigned the presidency in 1968 and he went on to serve as president of Pennsylvania State University from 1970 to 1983.

With a new emphasis put on shared governance, UK also saw major developments most recently under the leadership of President Lee T. Todd Jr. Under Todd's administration, staff would join the students and faculty in having a say in the operations of the university. A Staff Senate was established in 2002 to serve as the official representative body of the staff of the university. This new body was set up to provide an opportunity for all staff members at UK to have an interactive role in defining and maintaining a workplace that encouraged input from all staff. Since its inception, the body was able to help establish a shared leave pool and add a holiday to the hospital staff calendar.  In addition to creation of the Staff Senate, the University Senate was able to yet again expand its roles with a reorganization of the body. Todd stepped down from the presidency this June.

To hear President Eli Capilouto's vision for UK's future, the public is invited to attend his investiture ceremony at 4 p.m. Tuesday, Oct. 18, at the Singletary Center for the Arts Concert Hall. For more information on the ceremony, visit online at  www.uky.edu/President/investiture. 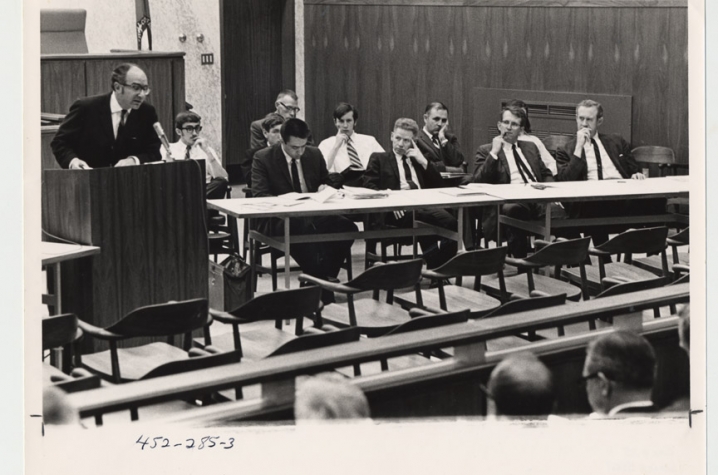