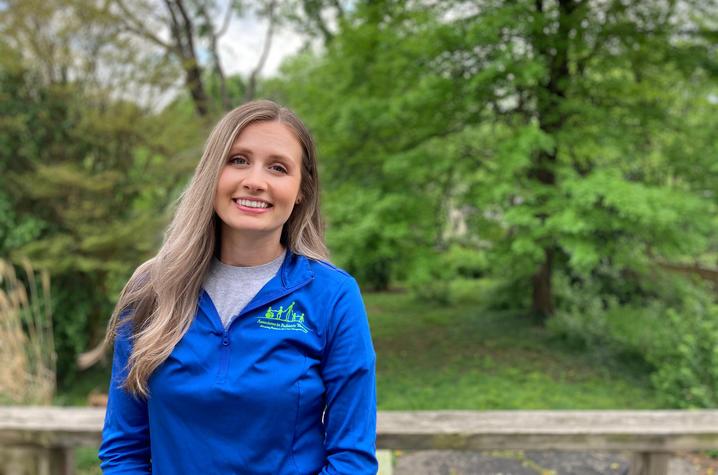 UK Health Sciences alum Tori Schaub developed a small telehealth program for her company in 2017, which served as a launching pad for the entire organization when the COVID-19 pandemic hit.

LEXINGTON, Ky. (May 21, 2021) — In February 2020, speech pathologist Tori Schaub and her coworkers were called into a meeting with the CEO of their company, Associates in Pediatric Therapy (APT) in Louisville. The message? That the new virus they’d been reading about, COVID-19, could seriously affect their business. With the possibility of office closures on the horizon, the company would need to make a full pivot to telehealth for the services they offered, which include behavioral, occupational, physical and speech therapies.

For guidance, they looked to Schaub, a 2017 graduate of the University of Kentucky College of Health Sciences. At just 27 years old, Schaub found herself leading the way in bringing telehealth on board for the providers and patients at APT.

“[My boss] asked me to make up a form that everyone was going to hand out to families, so we had that paperwork in their charts if they wanted to switch to telehealth in the event that we had to close,” Schaub said. “I made up this form, we passed it out to everyone, and then two weeks later, our clinics closed indefinitely.”

Fortunately, Schaub had been working on making telehealth a reality for the company since 2017. Shortly after being hired, Schaub had filled out a survey for her company that had included, among other things, questions about her familiarity with telehealth. Schaub had been among the first group of students to complete UK’s Linking Kids to Speech Language Pathologists (LinKS) program, run by UK College of Health Sciences Associate Professor Joneen Lowman. She noted this educational experience in the survey.

“Then a few weeks later, I get an email saying, ‘Hey, the CEO wants to meet with you about telehealth,’” Schaub said. “[Our CEO] is just a very smart, forward-thinking woman. She asked me that day if I wanted to start developing the program at the company.”

UK’s LinKS program helps future speech-language pathologists effectively utilize telehealth for children in rural areas of Kentucky. Although LinKS is designed for use in a school setting, the lessons learned in the program can be applied in other environments.

“Tori was able to find a perfect setting that was ready to get ahead of that curve,” Lowman said. “It says a lot about LinKS and what we’re teaching them that they’re ready to hit the ground running as new therapists in that arena.”

As a new grad – and not even fully certified as a speech therapist yet, which requires a full year of clinical work – Schaub was initially a little overwhelmed at the idea of building this program from scratch. But, she realized, her background made her the ideal – and only – candidate who could make this happen for her company. Though Kentucky TeleCare has been offering some healthcare services virtually for a while, UK’s College of Health Sciences is one of the few health science colleges nationwide to have a robust telehealth program that helps prepare other future health care workers. In addition to LinKS, Lowman runs a telehealth graduate certificate program, the first of its kind among health science colleges and the only telehealth certificate available in the state of Kentucky.

“The thing was, nobody else had that training that I had from UK,” Schaub said.

In the next few years, Schaub built out a small telehealth program consisting of herself and a few other speech therapists. It was a bit of an uphill battle to get buy-in on the program, but she was convinced the telehealth model could work.

“The primary idea is access to care,” she said. “It’s not something totally different from what we’ve been doing. It’s still therapy; it’s just a different medium we’re doing it through.”

When COVID-19 forced clinic closures across the country, Schaub’s small telehealth program became a huge launching pad for the rest of the organization. Schaub quickly developed and implemented trainings for other providers in the company and worked to make sure the appropriate paperwork was taken care of so that therapists could immediately continue providing care to their young patients. Her phone was “blowing up” for the next few weeks as coworkers sent her questions about troubleshooting and using the technology.

Even with their groundwork of telehealth in place, Schaub says it still took an enormous amount of effort across her company to go fully virtual. It’s a feat that she couldn’t imagine being able to pull off without the benefit of her background in telehealth.

“We felt very fortunate to have a foundation – we had a training program; we had software that was ready to use,” Schaub said. “We knew exactly what to do, and it was still a hard transition. I can’t imagine having to start from scratch in an emergency.”

APT reopened their clinics for in-person visits last June, but their telehealth program is still going strong. Schaub is proud of where the program is right now, but continues to look ahead to how they might grow and help even more pediatric patients. Even beyond the pandemic, telehealth therapy could continue to be hugely beneficial to kids who are otherwise medically compromised or who live in rural or underserved areas.

“We wanted this to be something that people could use when it served them well,” she said. “It doesn’t mean that every child needs to do it. But it’s just another tool, a way to facilitate the most effective therapy.”

Thinking back to her time at UK, Schaub notes that she had some hesitancies around adding a focus on telehealth to her educational curriculum, because it just wasn’t the way therapies were traditionally performed. However, she ultimately thought it could be beneficial in the future – and that paid off in a big way.

“I feel incredibly fortunate to have picked UK, because it created that opportunity for me,” she said. “When I started that program, I was like, ‘I don’t know about this. But it seems like it might be important soon.’ Technology is growing, and growing, and growing. Therapy should get behind that. I would much rather be on that side of the fight, versus resisting the change, so that when something like [a pandemic] comes up, you’re ready.”

Lowman, who describes Schaub as her “poster child” for implementing telehealth into real-life practice, says that with this May’s graduates, LinKS will have 40 alumni out working in the field, including four who have joined Schaub at APT. She notes that the program’s success is due in large part to strong support from Health Sciences Dean Scott Lephart, who understood the need to build a telehealth program that would train students to lead health care into the future. With COVID-19 proving the merits of virtual therapy, Lowman says telehealth training will be a necessity for future therapists who want to stay ahead.

“Telehealth is the future of health care,” Lowman said. “This is where health care is heading – not for every patient or every circumstance – but this is the future. You’re either on board, or your practice will be left behind.”