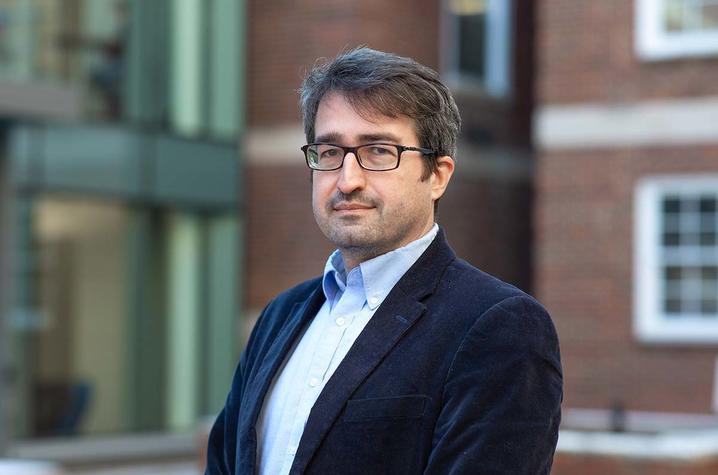 Alexandre Martin is one of the nation’s leading academic experts with regards to heat shields. Photo Courtesy of UK Engineering.

LEXINGTON, Ky. (June 16, 2022) — Alexandre Martin, Ph.D., a professor of aerospace and mechanical engineering at the University of Kentucky, has been named one of 14 University Research Professors.

The 2022-2023 University Research Professorship Awards honor faculty members who have demonstrated excellence that addresses scientific, social, cultural and economic challenges in the Commonwealth, across the region and around the world.

Individuals who displayed merit in research and scholarly activity within their area of expertise were nominated based on criteria developed by college leadership. Each University Research Professor receives a one-year award of $10,000.

“I’m very honored and humbled to receive this distinction,” Martin said. “A lot of the credit goes to the students that have carried out the work. I’m very proud of each of them and their accomplishments.”

Martin earned a bachelor’s degree in physics from the University of Montréal and a masters and doctoral degree in mechanical engineering from École Polytechnique de Montréal. During his graduate studies, he worked on ablation modeling. After graduation, Martin held a postdoctoral position at the University of Michigan where he applied his knowledge to hypersonic vehicles.

Martin joined the College of Engineering in 2010, and today, he focuses on the modeling of atmospheric entry vehicles, such as the one used by NASA to deliver the Perseverance rover on Mars. His contributions are primarily in the field of computational modeling, prediction and analysis. Martin has also supervised numerous flight experiments, including the first successful university-developed atmospheric entry capsule (KRUPS).

“The science behind hypersonic and planetary exploration is exciting. It's amazing how much there is to do to ensure that a space vehicle, traveling at thousands of kilometers per hour, can safely land on a planet located millions of kilometers away,” he explained. “It’s also nice to think that the work we do can contribute — even if just a little — to such achievements.”

Martin is one of the nation’s leading academic experts with regards to heat shields. Additionally, he's an area lead for the NASA Space Technology Research Institute and the thermal protection material co-lead for the University Consortium for Applied Hypersonics.

Martin is an American Institute of Aeronautics and Astronautics (AIAA) Associate Fellow and has published more than 135 peer-reviewed journal and conference papers. He is also regularly invited to give presentations on hypersonic thermal response and ablation.