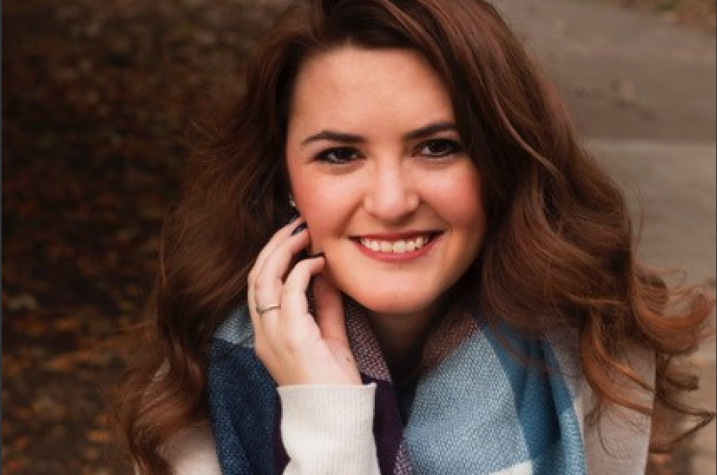 LEXINGTON, Ky. (March 17, 2021) — Sometimes tragedies can hold people back, but sometimes they can propel people forward and give them a purpose in life. That’s what happened to one University of Kentucky College of Communication and Information alumna who used a childhood crash to inspire her lifelong career.

Alex Otte, a 2018 journalism graduate, became the youngest president ever appointed for Mothers Against Drunk Driving when she took office this past January. At just 24 years old, Otte has a vision for the nonprofit that she hopes will bring them that much closer to No More Victims®, MADD’s registered trademark and something she’s dreamed of since she became a victim herself.

In 2010, Otte was gravely injured by a drunk boater on Herrington Lake near Danville, Kentucky. She had been on a jet ski while her mother and brother were docking their boat nearby. Having had her boating license and experience on the water for years, she knew not to move when a 17-foot bass boat started coming their way. Though the boat was originally headed for her mother, it suddenly banked left, hitting Otte head-on at over 60 mph.

The then 13-year-old was flung from her jet ski, landing face down in the water with the boat coming down on top of her. Otte sustained a severe brain injury similar to shaken baby syndrome, a shattered jaw, a destroyed root system of her teeth, a broken neck and collarbone, a lacerated liver, two shattered femurs and a leg injury that required amputation of her right leg at mid-calf. As she was airlifted to UK's hospital, her parents were told she wouldn’t survive.

After spending four days in a coma, three more days in a drug-induced coma and a week of eight emergency surgeries, Otte miraculously persevered. Her “new life” after the crash included three plates and 12 screws in her face, a prosthetic foot, countless regular surgeries, a never-ending recovery process and her start with MADD.

“I figured out very quickly that I wanted to be the last little girl that this ever happened to, and I know 10 years later that I wasn’t,” Otte said. “But I will continue to fight and spend my life making sure that the day comes where there is a last victim of drunk driving. And I desperately hope that I live to see that day.”

Since her crash, Otte has done well to make good on that promise. While in high school, she got involved with MADD on a state level through its legislative efforts. She spent many days in legislators’ offices sharing her story and advocating for bills that would help end drunk and drugged driving and support victims’ rights. Among the bills she helped to pass were the ignition interlock and DUI laws, the law that extended the look-back period on DUIs, and Marsy’s Law.

For her role in the ignition interlock legislation of 2015, she was named MADD’s National Youth Activist of the Year. In the previous year, she was one of 10 teens selected for MADD’s national teen influencer group.

Otte said her experience lobbying helped set her up for success in the public speaking realm and, consequently, her work as a journalist. Though she had dreamed of becoming a children’s book author when she was younger, she said the creative part of her brain was destroyed in her crash. But knowing she still wanted to write, she chose journalism because facts never change even if creativity does. She also chose to minor in political science to strengthen her legislative efforts.

Choosing UK was intentional for Otte because she knew her disability wouldn’t make her seem “weird” on such a big and diverse campus. Instead of focusing on her injury, she could then focus on her goal to become the next Erin Andrews, covering football games from the sideline. She lived this dream for six years, photographing UK football and impressing her former journalism professor Kakie Urch not only with her career aspirations but her philanthropic aspirations as well.

“I can see why MADD would give her this responsibility and how she will shine at that as well,” said Urch, associate professor in the School of Journalism and Media. “Alex Otte is so smart and generous and interested that it is difficult not to be drawn to her and her direct, uncompromising commitment to this issue that has had such an impact on her life. And her example helps others see what is possible and inspires drivers, boaters and communities to renew their commitment to eliminate impaired driving. I am overjoyed — but not surprised — to see this appointment.”

Otte said the “incredible” teachers she had at UK had a huge impact on her then and now. They challenged her to explain herself and her way of thinking, making her a better student and leader. She said that knowing they wanted her to succeed only helped push her to do so.

“Alex stood out to me as a teacher long before I learned of her tragic life story,” said Stephen Voss, associate professor in the College of Arts and Sciences’ Department of Political Science. “Her attentiveness in class, her poise when engaging with intellectual challenges and her work ethic all made her stand out from the crowd in my first-year course. The tragedy that struck Alex as a girl might make her a fitting symbol for MADD's mission, but the qualities I saw from Alex as a starting student surely must explain why MADD saw her as a fitting leader."

Despite her love for journalism, Otte knew she had another calling when she joined the National Association of State Boating Law Administrators (NASBLA) after graduating from UK. It was there that she got to conduct research and advocate more for legislation dealing with drunk and drugged boating, which dealt specifically with her crash.

Her work with NASBLA later inspired the three goals she set for herself once selected as president of MADD. She wants the nonprofit to engage more with injured victims, train law enforcement on dealing with victims and families immediately after a tragedy and develop resources for people who are killed or injured by modes of transportation other than cars.

Otte said the timing of her presidency couldn’t be better. Since she and her fiancé do not have children, she currently has time for the demands of the job. Though she can’t exactly picture what the future will hold, she’s excited to see what she can accomplish in her two-year term.

“I firmly believe everything happens for a reason. I think I will spend the rest of my life trying to figure out what my reason is because there’s no medical reason that I survived,” Otte said. “That’ll be the rest of my life until there are No More Victims®, and even after that because those that have already been victimized will live with this for the rest of their lives. The advocacy both for boating and water safety, boating under the influence and driving under the influence will never end. It will always be a part of my life.”