LEXINGTON, Ky. (June 17, 2021) — As the long, arduous fight for social justice continues, many businesses, institutions, local governments and communities will celebrate the Juneteenth holiday for the first time this weekend. But, for most African Americans, June 19 is more than a holiday, it is likely the most cherished day of celebration on their calendar.

While the Emancipation Proclamation was issued Jan. 1, 1863, declaring more than three million slaves living in the Confederate states free, it was not until Union soldiers arrived in Galveston, Texas, two years later, on June 19, 1865, that the last enslaved U.S. populations were informed of the proclamation.

University of Kentucky Director of the Gaines Center for the Humanities and legal scholar Melynda Price, a native of Texas, explained the importance of the holiday to her and her family.

“Juneteenth means everything to me. I’m a fifth generation Texan. My great-great-grandmother was enslaved in southeast Texas in a small town called Eagle Lake, Texas, not too far from the Colorado River. And for my family, Juneteenth is Emancipation Day. It is the day when we all got together.

“Everyone thinks of the Fourth of July as the big day for freedom and liberty. But my aunts and uncles would always say, ‘We celebrate freedom on Juneteenth. We get together on the Fourth of July because we’re off.’ Because in truth, that day really is not about freedom and emancipation for people who are descendants of the formerly enslaved anywhere in the United States, but certainly not in the state of Texas.”

Price’s mother’s grandmother, Elvira Spates, was her first foreparent to be born emancipated, after her mother crossed the Colorado River and two days later delivered her great-grandmother in the town where much of her family still lives now. Spates lived to be almost 100 and was an active part of Price’s mother’s life.

Watch the video above to learn more about how Juneteenth directly impacted Price’s family and her life and work today.

This marks the first year UK will celebrate Juneteenth as an academic holiday. To see what other members of the UK family had to say about the holiday, watch: https://youtu.be/Bss5-3vs3F0.

Melynda Price is the William L. Matthews Jr. Professor of Law at the UK Rosenberg College of Law, a faculty member of the UK College of Arts and Sciences Program in African American and Africana Studies, and the John and Joan Gaines Professor of Humanities. Since 2018, she has served as the director of the Gaines Center for the Humanities. Price specializes in race and the law, gender and the law, citizenship, and capital punishment. 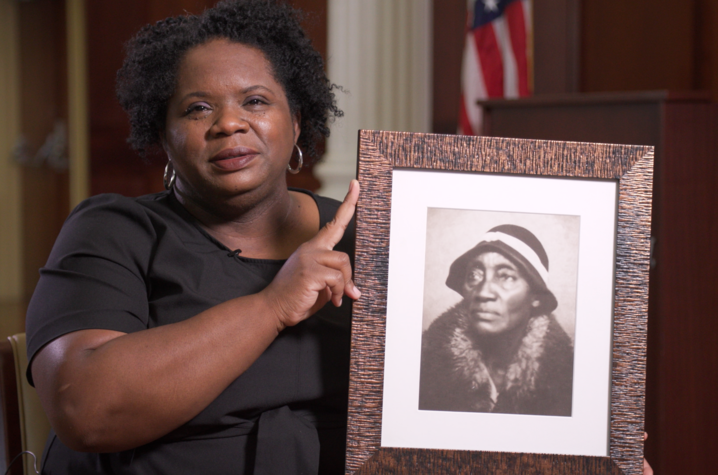 Gaines Center Director and legal scholar Melynda Price holds up a photo of her mother's grandmother, Elvira Spates, her first foreparent to be born as an emancipated person.