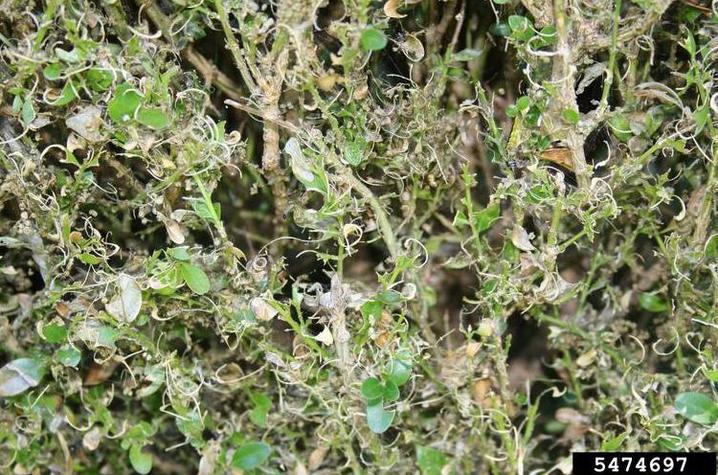 Damage to a boxwood caused by the box tree moth. Photo by Ferenc Lakatos, University of Sopron, Bugwood.org.

LEXINGTON, Ky. (July 20, 2021) — University of Kentucky entomologists and the U.S. Department of Agriculture are asking Kentuckians to monitor their boxwoods for a potentially serious insect pest, the box tree moth. Boxwoods purchased this spring are at the highest risk for the moth.

“The box tree moth is another emerging pest that has the potential to have serious economic impacts for the state’s green industry,” said Jonathan Larson, extension entomologist with the UK College of Agriculture, Food and Environment.

Potentially thousands of moth-infested plants entered the United States in May in shipments from Canada. These shipments went to Tennessee, South Carolina, Connecticut, Massachusetts, New York, Michigan and Ohio. While Kentucky did not receive an infested shipment, potentially infested boxwoods were found in nine Kentucky landscapes. One person purchased plants from an online retailer in South Carolina. Others purchased boxwoods from a retail chain with a distribution center in Tennessee. The Kentucky Office of the State Entomologist worked with the homeowners to contain the pests and to prevent a widespread infestation.

“Everyone who received the material was very cooperative and allowed the plants to be taken and destroyed,” said Joe Collins, senior nursery inspector with the Office of the State Entomologist. “They also allowed us to place an insect trap with a pheromone specifically for the box tree moth in their yard as a preventative measure. The traps will be checked in mid-August at which time the pheromone will be replaced with a new pheromone lure. In mid-September, the traps will be removed.”

Boxwoods are extremely popular in Kentucky and American landscapes and a huge economic driver for the state’s green industry, with many nurseries shipping plants across the country.

Box tree moth females lay their eggs on the backs of boxwood leaves. Once they hatch, moths live only about two weeks, so Kentuckians could see several generations from now until September.

“The caterpillar stage of the moth will begin feeding on leaves, then move to the stem, and eventually kill the plant,” Larson said.

Larson encouraged Kentuckians to look for signs of box tree moth damage on their boxwoods, especially young plants. This damage includes translucent leaves and webs on leaves similar to those of a tent caterpillar. Additional signs include chewed, cut or missing leaves, yellowing or brown leaves and green-black excrement on or around the plant. The caterpillars are green and yellow with white, yellow and black stripes and black spots. Moths have brown borders around their wings and white centers.

If homeowners suspect they have damage from the box tree moth or see the caterpillars, they should contact Larson at jonathan.larson@uky.edu or their local USDA office, who can confirm an infestation and destroy any infested plants.