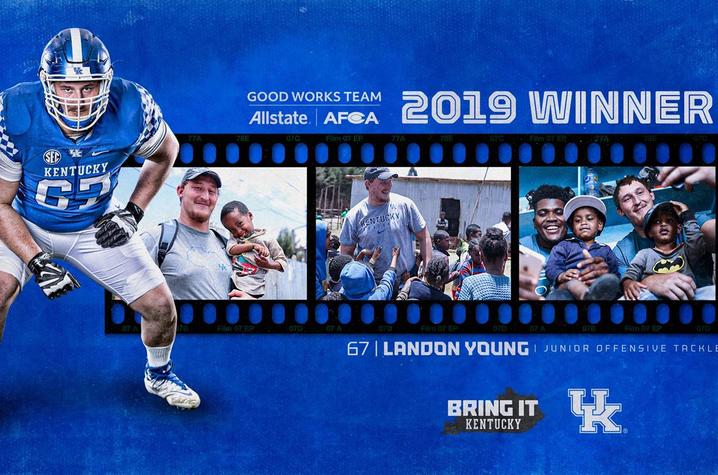 Landon Young has been named to the 2019 AFCA award.

LEXINGTON, Ky.  (Sept. 17, 2019) – University of Kentucky junior offensive tackle Landon Young has been selected to the 2019 Allstate AFCA (American Football Coaches Association) Good Works Team®, an annual award given to college football players for the impact they make off the field.

The list of 22 student-athletes (11 players from the NCAA Football Bowl Subdivision; 11 players from the NCAA Football Championship Subdivision, Divisions II, III and the National Association of Intercollegiate Athletics (NAIA)) and one honorary coach was narrowed from a list of 137 nominees by an esteemed panel of judges, including Kirk Herbstreit (ESPN) and Tim Tebow (Florida, 2009 team). These players stood out for their leadership in local communities and overall commitment to giving back.

The Allstate AFCA Good Works Team will be invited to the 2020 Allstate® Sugar Bowl® and will join Tebow and Allstate volunteers to give back to New Orleans through a special community service project. Allstate will recognize the team during the halftime show.

Fans are invited to visit ESPN.com/Allstate to vote for the 2019 Allstate AFCA Good Works Team captain once per day, now through Nov. 22. The team captain will be honored at The Home Depot College Football Awards on ESPN later this season.

Throughout the season, fans can follow along and join the conversation by using #GoodWorksTeam on their social media channels to learn more about these incredible players and their stories.

Since being founded in 1992, UK ties Nebraska with the second-most players on the Good Works Team with 15, most recently Courtney Love in 2017. Georgia is in first place with 20 honorees.