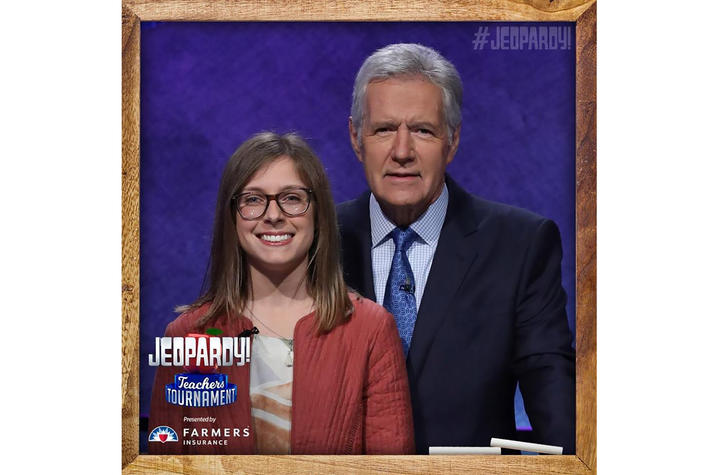 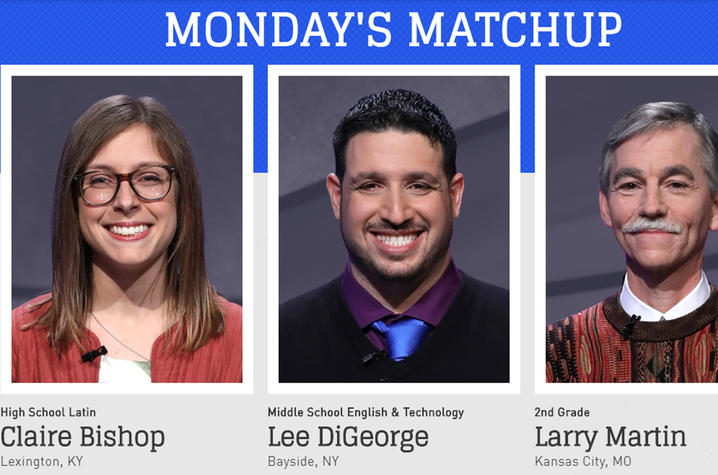 UPDATE: Claire Bishop is a finalist in the contest and people can watch her compete in the two-day final of the “Jeopardy!" Teachers Tournament this Thursday and Friday, May 17 and 18.

Bishop, a graduate of the University of Kentucky, is one of 15 upcoming competitors on the long-running TV quiz show. The "Jeopardy! Teachers Tournament" starts airing tonight (May 7) on CBS.

"I was shocked when I looked down at my phone after the bell rang on a Friday afternoon to see a voicemail from a California area code. It had been several months since I had gone to the in-person audition in Nashville," she said. "After a while you forget and/or give up (though they can call you up to 18 months after you audition if you qualify). Also, people often audition for 'Jeopardy!' multiple times before they get 'the call' to tape, so I didn’t expect to be selected after auditioning only once."

Bishop will be on the first night of the two-week tournament, competing against Lee DiGeorge, a middle school English and technology teacher from Bayside, New York; and Larry Martin, a second-grade teacher from Kansas City, Missouri.

Bishop, a Latin teacher at Tates Creek High School, is the only Kentucky competitor in this year's tournament.

"I hope people are surprised and impressed that Latin is still being taught throughout the country, even in Kentucky. Perhaps viewers who took Latin years ago will reminisce about their Latin experience and start conjugating verbs from their couch."

As an undergraduate, Bishop was in the Honors Program and a Gaines Fellow. She took classes in Russian culture, entomology, architecture and memory, Roman law, public health in film and linguistics.

"I wouldn't trade my state school experience for the world. The classics program at UK is singular, known throughout the world for its Institute for Latin Studies that promotes active Latin," Bishop said. "I took courses where lectures, class discussions and term papers were all in Latin. Most consider it a dead language, but Professor Terence Tunberg and Professor Milena Minkova at UK are keeping Latin alive and well as a means of interacting with texts, from the Romans to the Renaissance."

Bishop, who has been teaching in Fayette County since 2014, said UK guided her passion for education.

"I want students to be able to make connections between their world and that of the Greco-Roman tradition. I want them to see that Latin is everywhere — books, movies, advertisements — and understand why that is: the size of the Roman empire, the prominence of the Catholic Church, the influence of the Renaissance. Our lives mean more when we know where we’ve come from, and that informs where we’re heading. Western civilization owes much to the Greco-Roman world and the Latin language."

Each competitor in this year's tournament already received $2,500 classroom grants from Farmer's Insurance and Thank America's Teachers. Bishop is using her grant to purchase a collection of Latin novellas to start a free voluntary reading library for her students.

"There are Latin translations of several popular books: "Ille Hobbitus," "Harrius Potter et Philosophi Lapis," "Winnie Ille Pu," etc., but these texts are for advanced level learners," Bishop explained. "The novellas I want to purchase will be targeted for my Latin 1 and 2 students and are written at the novice and intermediate levels. Class time will be set aside for students to choose what book they want to read; they can do so at their own pace and even read if they finish assignments early."

The tournament winner is guaranteed $100,000, with $50,000 for second and $25,000 for third, unless they win more than those totals in the actual games. In addition to the money, the tournament winner earns a spot in the "Jeopardy!" Tournament of Champions, later this year.

No matter how much money she wins, Bishop hopes her appearance on the hit TV show will send a priceless message to her students.

"Knowing things can pay off … literally. There have been and will always be people who enjoy acquiring trivia. These people don’t always get a chance to display their knowledge in a professional setting, so knowing a little about a lot becomes a hobby. 'Jeopardy!' gives this hobby life; you can be on national TV and win some money for knowing random stuff. This random stuff, however, is really the story of being human."

"Jeopardy!" is in its 34th season in syndication and commands a viewership of about 23 million each week. Alex Trebek hosts the program, which is the top-rated quiz show on TV.