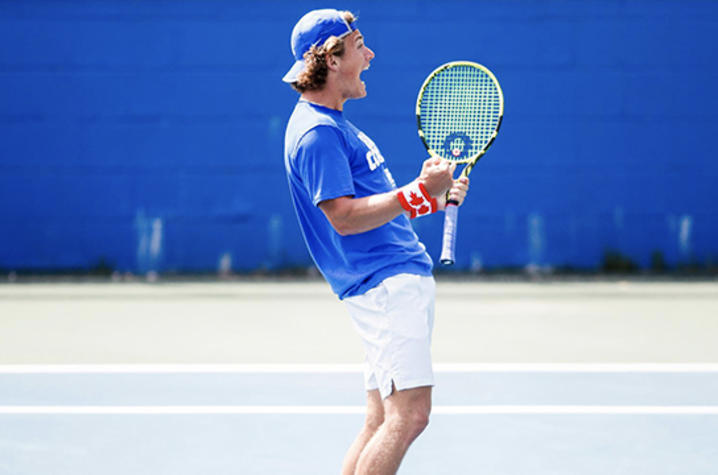 LEXINGTON, Ky. (June 4, 2021) — The story of a breakthrough 2020-21 season for the Kentucky Wildcats men's tennis program is still unfolding.

Liam Draxl was named the first Intercollegiate Tennis Association (ITA) National Player of the Year in program history after finishing atop the final ITA Division I Men's Singles Rankings this week.

Diallo becomes the seventh player in program history to earn ITA All-America honors in both singles and doubles play in the same season, a feat most recently accomplished by Tom Jomby in 2013. Diallo finished No. 20 in the ITA singles rankings after producing a record of 21-9, including six ranked wins this spring.

Diallo's NCAA Championship run ended in the third round, marking only the second time in school history that two Wildcats reached the Sweet 16 in the same season. Including Draxl, the 19-year-old Canadian underclassmen are the youngest Cats to reach the round of 16 after then-seniors Eric Quigley and Alex Musialek became the first in 2012.

Diallo and Bourgois earned a top-eight seed at the NCAA Championships, eventually landing at No. 12 in the final ITA doubles rankings after falling in the tournament's opening round of 32. The combination of the 6-foot-7 Diallo and the 6-4 Bourgois was good for a 14-10 record, with seven wins coming against ranked opponents.

Draxl, Diallo and Bourgois are the 22nd, 23rd and 24th ITA All-Americans in Kentucky history, with the two dozen players combining for 46 all-time selections. The honor is the first of Bourgois' collegiate career, which is the only tenure on the team set to expire this season.

For singles, ITA All-America qualification includes earning a top-16 seed or advancing to the round of 16 at the NCAA Championships, as well as finishing in the top 20 of the final ITA rankings. All-America recognition is awarded to doubles teams that earn a top-eight seed or reach the quarterfinals at the NCAA Championships, as well as to those who finish in the top 10 in the final rankings.

Kentucky's team performance ended in the NCAA Championship second round with the season's only loss at home. Kentucky was one of just seven schools to put three participants in the 64-player singles field at the NCAA Championships, where senior Millen Hurrion — who is expected to return in 2021-22 — was forced to withdraw due to injury.

While the Wildcats finished the year with a No. 18 ranking as a team, Kentucky was one of just four schools to put five players in the final ITA singles rankings. In addition to Draxl and Diallo, Hurrion landed at No. 37, Bourgois checked in at No. 90 and freshman Joshua Lapadat was placed at No. 104.

Kentucky was also the only team in the league to put multiple players on the SEC All-Newcomer Team, which was announced this week. Draxl, who was already named SEC Newcomer of the Year last April, was joined on the six-person team by Diallo.