LEXINGTON, Ky. (Nov. 5, 2021) — In 2019, the University of Kentucky commemorated 70 years of integration on its campus. As part of that commemoration, the university commissioned a portrait of Lyman T. Johnson — the first Black student to enroll at UK in 1949 after a successful legal challenge.

This week, that portrait was installed in its intended home — the UK residence hall that bears Johnson’s name.

“Every piece of art tells a story, and the portrait of Lyman T. Johnson is an especially important one,” said UK President Eli Capilouto. “The dynamic painting reminds us of the courage and tenacity with which he challenged prejudicial systems. Part of the University of Kentucky’s history is immortalized in the portrait, which is on display in the Lyman T. Johnson residence hall where it will continue to teach and inspire us.”

Johnson’s 1949 admission to UK resulted in the university’s first racially integrated class. For Johnson, it was a grueling path.

“It’s remarkable,” Johnson wrote in his memoirs, “that so much has changed in the space of 30 years — from the time I forced my way into the university on a court order to the day the university gave me an honorary degree.”

The collage portrait, titled “I Lived Half of my Life in the Darkness, and Half in the Light,” was created by Imar Lyman Hutchins, a Washington, D.C.-based artist and grandson of Johnson.

When looking at the piece from several feet away, it appears upbeat, with a vibrant yellow background and an older Johnson's face, laughing. But upon closer inspection, the viewer will see it is compiled of pieces of hate mail received by the trailblazing civil rights pioneer, along with various photos and other historical documents from throughout his life. The threatening words and images may trigger a strong and emotional response even as they are, collectively, designed to speak to the complex racial and cultural context in which Johnson lived.

At the time of the portrait’s unveiling in 2019, Hutchins told UK that his grandfather continued to receive hate mail well into the 1990s. When asked why he chose to use those letters in the collage, Hutchins said "because it exists."

“The commission honoring Lyman T. Johnson does not shy away from the realities of his life, and it is simultaneously celebratory and cautionary,” said Stuart Horodner, director of the UK Art Museum. “The bright colors and his smile give an immediate impression as a joyful portrait. Closer looking and reading of the collage elements take the viewer to a more troubling place, shedding light on the context in which Johnson lived, and the pain he endured during his socio-political realities. It is fitting that his grandson, Imar, was given the opportunity to contribute to the UK embrace of his family’s legacy.”

"What he's challenging us to do is rise above it," Hutchins said. "How could someone endure all these things and not be hard-hearted like the person who might have done it? You can say he still maintained his spirit, despite all that. That's part of the lesson for us."

The portrait was first unveiled in 2019 during the annual Lyman T. Johnson Torch of Excellence Awards ceremony at UK. After its unveiling, the piece spent two months on display at the UK Art Museum before traveling to the Muhammad Ali Center in Louisville as part of its "Inheritance" exhibition. It was then returned to the UK Art Museum in 2020, and installed in Lyman T. Johnson Hall last week.

Watch the video above to learn more about the artwork. 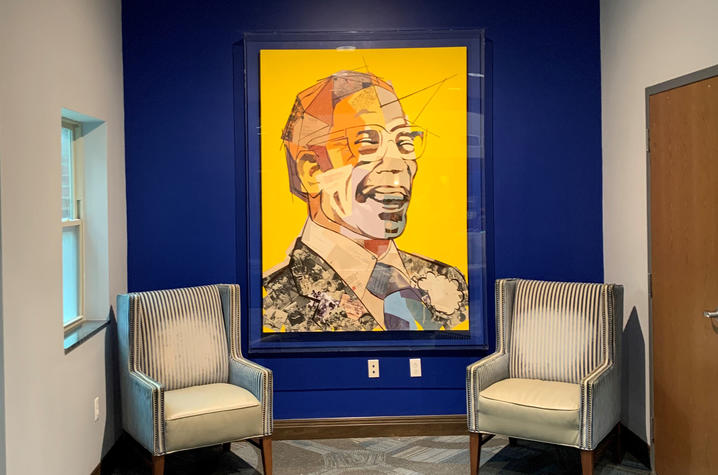