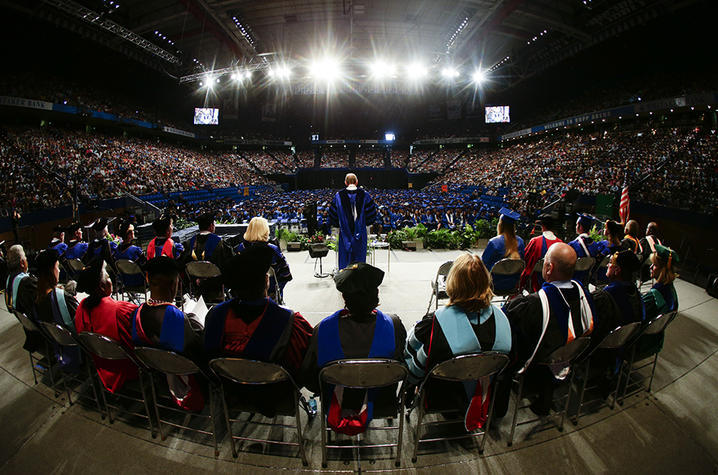 LEXINGTON, Ky. (Feb. 9, 2017) — The University of Kentucky has seen dramatic increases in the number of graduates and families and friends attending Commencement ceremonies. For example, in 2011, more than 2,400 graduates participated in May Commencement. In May 2016, that number increased to more than 3,100.

To accommodate these rising numbers and to provide a better experience for UK graduates and their families and friends, in 2017 the university is moving from three ceremonies to four ceremonies.

Doctoral, master's and baccalaureate degree recipients will now be recognized together based on their colleges.

"The Commencement Committee recommended and is moving forward with increasing the number of ceremonies from three to four over two days," said Jay Blanton, executive director of public relations and marketing. "The increase in the number of ceremonies is expected to shorten the length of each ceremony, thereby being sensitive to travel schedules and needs for families who often travel long distances for commencement."

The Commencement Committee is composed of a broad representation of faculty, students and staff who make decisions about the commencement process and dates.

Commencement dates and times are subject to change each year, and are historically announced in the spring. Commencement weekend nearly always falls on Derby weekend, as the academic calendar concludes after final exams during the first week of May and following approval of degree recipients by the Board of Trustees at its May meeting.

The schedule below is an attempt to best serve the growing number of graduates and their families and friends, and provide the highest quality ceremonies for each new member of the UK alumni family.

The ceremonies will be held at Rupp Arena.