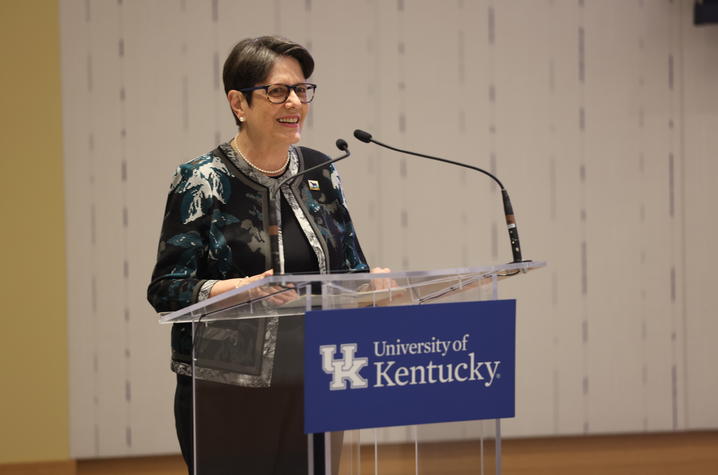 Lexington Mayor Linda Gorton spoke to the UK Board of Trustees about the important partnerships the city has with UK.

LEXINGTON, Ky. (June 17, 2021) — Lexington Mayor Linda Gorton believes strategic partnerships have been crucial to the community’s ability to emerge from a global pandemic and to meet issues like systemic racism head-on.

And no partnership, she said Thursday, has been more crucial than the one the city has with the University of Kentucky.

“Partnerships, especially the partnership with UK, have gotten our city through the pandemic,” Gorton told members of the UK Board of Trustees during their June meeting Thursday. “Over the past 15 months, the pandemic has moved through various stages, and I can tell you at each stage, UK, our partner, was there.”

In particular, Gorton cited UK’s efforts and partnership with the city on vaccinations and in helping sustain the community’s economy.

“That is a staggering achievement,” Gorton said. “It is a huge piece of why we are able to reopen our city this summer.”

UK was also there, Gorton said, when the community’s economy faced historic challenges. During March and April 2020, she said, the county’s unemployment rate grew to 14%.

As Fayette County’s largest employer, though, UK did not cut its budget across the board and was also able to manage without large reductions in its workforce.

“At the time, Dr. Capilouto said publicly this was important to our community,” Gorton said. “UK, our city’s largest employer, kept its people working. When they write the book talking about the importance of UK to the City of Lexington there will be a special chapter about the pandemic entitled ‘UK was there.’”

Gorton also cited close work and partnership with UK as the city has taken an “unflinching” look at itself in addressing issues and challenges around systemic racism.

UK History Professor Gerald L. Smith was co-chair of a task force Gorton appointed that looked at issues, such as police and criminal justice reform, housing and schools. That task force has created a 68-page report with 54 substantive recommendations.

UK Assistant Vice President for Community Engagement Lisa Higgins-Hord has been working with the city on how best to implement some of the report’s recommendations.

Finally, Gorton cited the close partnership between UK and the city in strengthening economic development efforts.

That partnership is represented most significantly by the 2018 land swap between UK and city that provided Fayette County with 250 acres near Coldstream Research Park for development.

Ongoing efforts at Coldstream, Gorton said, include a bike path and amenities for cyclists. The design won recognition from the International Economic Development Council for city-university projects.

Coldstream, she said, also has recently broken ground on a new residential village, FIFTEEN51, “so the workforce will be able to live, work, play and innovate all within the research campus,” the mayor said. Construction of a new facility for early stage high-tech companies is also under construction. The Core provides wet lab space for both UK startups, and for companies from across Kentucky.