The atmosphere is quiet and serious.

But as T. Lynn Williamson, who serves as principal deputy general counsel, steps outside his office to speak with his colleague, General Counsel William E. Thro, the mood lightens.

The men begin talking about Williamson’s other job at UK, that of advisor for the UK cheerleading squad, a position he’s held for 40 years now.

“You know, I tell people, ‘if you added up the national championship rings earned by Adolph Rupp, Mike Krzyzewski and John Wooden, it still wouldn’t equal as many as T. Lynn has,’” Thro said.

The UK alumnus does not like to boast or brag, but it’s clear he is proud of the tradition his cheerleaders have built since winning that first championship back in 1985.

“So, I took over the program (in 1978), and at that time, cheerleading was just beginning to evolve into more of an athletic activity, but it wasn’t what it is today at all,” Williamson said.

In fact, UK cheerleading was part of Student Affairs, which was also where Williamson worked at the time.

In the past 40 years, both cheerleading and Williamson’s role at the university have evolved.

“T. Lynn has meant everything to the program,” said Cathy Bell, a former UK cheerleader who graduated in 1976.

“I am so proud of the cheerleading legacy that he created here at the University of Kentucky,” Silvestri said.

“I think some of us that cheered just those few years before that wish we had that kind of dedication, determination, to take us to another level because they started competing, and many of us would loved to have done that,” Bell said. “I wouldn't trade my experience for anything, but I do think that he brought such a different perspective, and he had that ambition to take on the challenge of competing with other squads.”

Dale Baldwin was part of the first UK cheerleading squad to win a national championship. While he relishes the memories of that moment, what really stands out to him is how Williamson helped him outside of cheerleading.

“He was a real mentor for me,” said Baldwin. “I was a first-generation college student, so my parents couldn’t really advise me. From day one he was a mentor for me.”

That mentorship grew into something much more valuable after a life-altering accident.

“When I broke my neck as a UK cheerleader, he was there for me,” Baldwin said. “He assisted me in every form or fashion, ensuring that I continued my education and graduated.”

Baldwin can’t say enough about this mentor, who is also now a friend.

“He’s done so much for this program and this university,” Baldwin said.

In his 40th season, it does not appear Williamson is slowing down.

At a recent Friday afternoon practice, he watched intently as the cheerleaders flipped and flew through the air.

“T,” as the student-athletes call him, was quick to offer constructive criticism.

“That was good, but it would have been better if you smiled,” Williamson said.

It is that attention to detail that will drive the team as they go for what would be UK’s 24th UCA National Championship in January 2019.

But in the end, it’s not the rings that seem to make Williamson smile the most as he sits in his office overlooking campus.

It’s the relationships he has built over the years that really matter.

“I’m a single person, and I would say the cheerleading program has been my life,” Williamson said. “It is my family.”

Watch the video above to discover more about the man behind UK cheerleading’s impressive legacy and why his friends, former cheerleaders and UK President Eli Capilouto are so proud of the tradition Williamson has built. 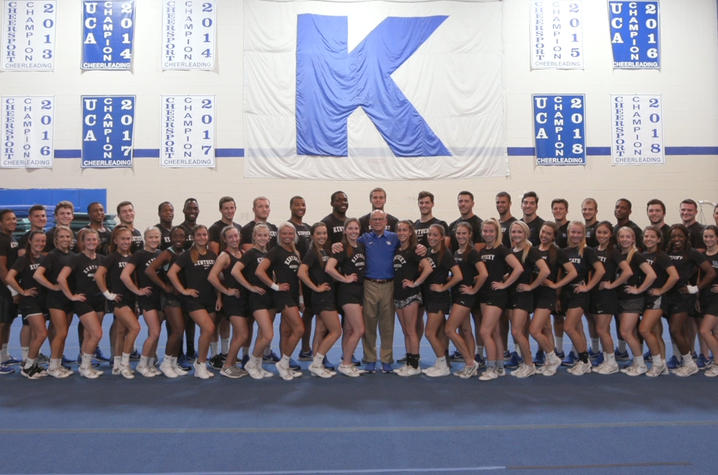 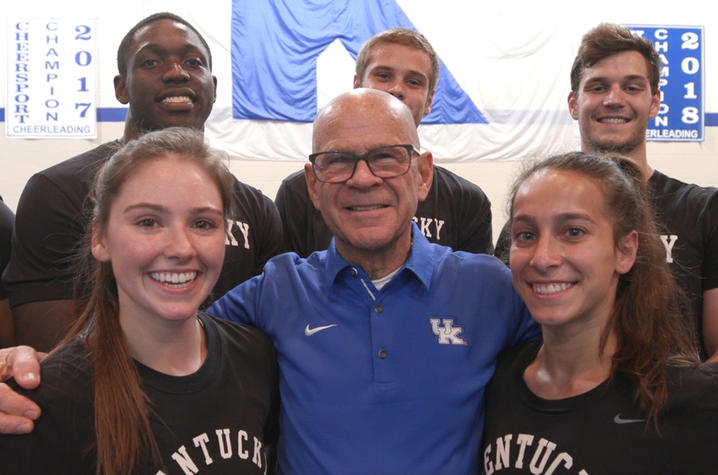