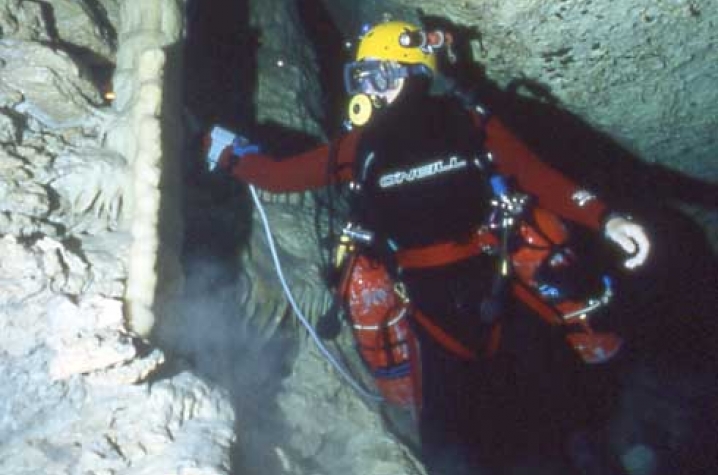 LEXINGTON, Ky. (April 21, 2011) – University of Kentucky geologist and cave diver Stephanie Schwabe recalls her 1997 dive into the Mermaid's Lair, on the south side of Grand Bahama Island quite plainly.

Schwabe is not one to embellish or exaggerate. A simple account of her late August dive is captivating of its own accord.

Angel Effect delves deep inside the mysterious phenomenon of the "Third Man Factor," as detailed in John Geiger's bestselling book of the same name.

"When faced with life and death, the brain flips an 'angel switch' and help arrives — at least for some," Geiger said on National Geographic's website. "Hundreds have reported this mysterious phenomenon — and now, science is taking a closer look, zeroing in on the location and the mechanism in the brain they believe may be responsible for these visions."

Schwabe's story begins 3,000 miles off the coast of the Bahamas in Mermaid's Lair, a cave that few have seen from above ground or below.

Schwabe ordinarily dove with her husband, British cave explorer Rob Palmer, who was an expert on the blue holes of the Bahamas. The majority of blue holes, given their name due to their dark blue hue, remain unexplored.

But that day Schwabe was diving alone. Palmer had not survived a dive in the Red Sea three weeks earlier. "This was a place that Rob and I had spent a lot of time in," Schwabe said of Mermaid's Lair. "And it was only three weeks after Rob's death. I was emotionally stretched at that point."

As Schwabe neared the floor of the cave, she began collecting her soil samples and didn't look up until it was time to go. That's when Schwabe encountered a problem. She could not find her guide line. While a guide line might not seem like much of an issue for those familiar with conventional diving, in cave diving, one cannot simply rise to the surface to exit. The guide line serves to point a cave diver through narrow and sometimes horizontal passages in order to safely leave the cave.

"As I began to look around, I realized right then what I had assumed, and then I got angry," said Schwabe, who had always trusted Palmer with the guide line during their dives. "This really evoked a latent rage in me there on the bottom of the ocean floor...at Rob and at myself."

As her anger continued, Schwabe's surroundings became brighter, followed by a sense of calm. "I began to look around, I thought about my actions and resolved not to do it again," she said. "Rob always used to tell me: 'believe you can, believe you can't; either way, you're right.'"

After scanning the area, Schwabe found the guide line and returned to the surface, not a breath too soon. "It was my rage that saved me," she said. "And I wasn't going to make the same mistake again."

Schwabe is the only woman featured in Geiger's book and in The Angel Effect. The documentary interview was emotionally tough, as the topics National Geographic covered weren't topics this resilient cave diving warrior focuses on so much. "These types of things happen in my line of work," she shrugged. "I usually deal with it and put it away."

This is not to say Schwabe does not think about the risk each time she dives. "It's a 50-50 shot that I don't make it every time I do this," she said. "It doesn't matter how much experience you have. Rob was safer in the water than he was on land. Every time I go in, I'm afraid. Only fools aren't afraid."

So, what keeps Schwabe going back to these life or death situations, back to this no man's land where one piece of malfunctioning equipment can spell disaster?

"It's the desire to want to go and make discoveries that no one has seen before," Schwabe explained. "It's the allure of the unknown. And in the process, I explore parts of myself that most people don't."