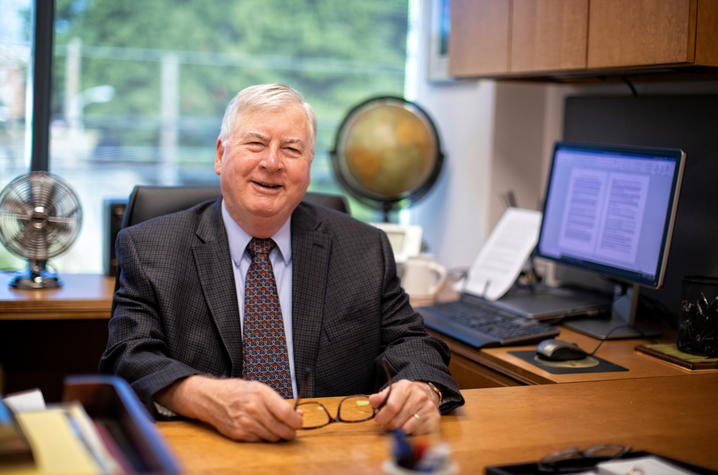 LEXINGTON, Ky. (Sept. 30, 2019) — The opioid crisis raging across the country continues to impact many Kentuckians each day. Recent and ongoing national lawsuits are shedding light on the liabilities and responsibilities of pharmaceutical manufacturers.

University of Kentucky College of Law professor Richard Ausness, the Stites and Harbison Professor of Law, is often contacted by local, national and even international media outlets regarding his expertise on the lawsuits surrounding the current epidemic.

Ausness actively teaches courses and conducts legal research. His specializations include property, trust and estates, and products liability. His expertise on products liability was the catalyst for innumerable media inquiries on the topic of opioids and pharmaceutical litigation.

Ausness has published two books and more than 60 law review articles since 1970 in such journals as the North Carolina Law Review, Georgia Law Review, Indiana Law Review and Tennessee Law Review. United States Supreme Court Justice Sonia Sotomayor cited Ausness in her 2011 dissent in Bruesewitz v. Wyeth, which dealt with the extent to which the National Childhood Vaccine Injury Act of 1986 could protect vaccine manufacturers from claims of design defect.

How does the law impact the lives of those impacted by the opioid crisis? Will court verdicts change the future of pharmaceutical lawsuits? We asked Richard Ausness to share his expertise and thoughts in the Q&A below.

UKNow: The opioid crisis is something that seems to be growing and impacting more individuals and families each year. What role does law play in the opioid crisis? When we talk about combating this national epidemic, why is legal aid a critical component of the solution?

Ausness: Law, or rather, litigation can play a role in solving social problems in three ways: First, it can publicize the problem and identify those who are causing it; secondly, it can put pressure on public officials to respond to the problem; and third, in the case of govern-sponsored lawsuits, damage awards can provide funds to finance remedial programs.

UKNow: What inspired your research focus on the opioid epidemic?

Ausness: One of my areas of interest is products liability. Several years ago, I wrote a couple of law review articles on pharmaceutical company liability. This led to an invitation to contribute to a symposium on opioid issues at West Virginia University and ultimately resulted in an article about opioid litigation. As state and local governments started to sue drug companies, I was interviewed by a number of newspapers and magazines and now get called upon whenever there is a new twist or turn in this area.

UKNow: How has opioid litigation evolved as the number of opioid-related deaths continues to rise?

Ausness: The rising number of opioid-related deaths contributes to public awareness and concern about the problem. However, the present round of opioid cases is not directly concerned with personal injuries. The government plaintiffs are suing for economic losses, not personal injuries.

UKNow: The first case against an opioid manufacturer, Johnson & Johnson, reached trial recently as opposed to being settled outside of court. The judge and the jury have found Johnson & Johnson responsible for $572 million in damages for harm caused to the people of Oklahoma. Is this a landmark situation? Why/why not?

Ausness: It is not a landmark case as far as setting a legal precedent is concerned. From that perspective, it is a state trial court decision that almost certainly will be appealed and perhaps overturned. However, it will have some influence on settlement negotiations in other cases.

UKNow: What kind of precedent does this case set for the nation?

Ausness: As mentioned in my previous answer, it will not set a precedent and will certainly not be binding on other courts.

UKNow: The Kentucky Attorney General has filed nine lawsuits against opioid manufacturers and distributors. Will the ruling in Oklahoma impact those potential cases?

UKNow: Do you think these large lawsuits and cases will impact the number of opioids prescribed or the way that opioids are prescribed?

Ausness: These cases may have some effect. However, I think that criminal actions against prescribing doctors and DEA enforcement actions against distributors and retail pharmacies will have a greater impact.

UKNow: Are these lawsuits a solution to the bigger problem?

Ausness: As I mentioned earlier, litigation can be useful. However, I think that it is overrated. For example, I don’t think that the tobacco litigation did much to reduce smoking. Raising cigarette taxes probably did more in this regard.

UKNow: Can litigation help to solve this national, and incredibly regional, problem?

Ausness: Litigation can help, but a greater response at the federal and state level will be needed to make a dent in this problem.

UKNow: Why do you think Kentuckians should be paying attention to these national cases?

Ausness: Opioid addiction is a national problem. We should keep an eye on what is going on elsewhere. Maybe another state will come up with a better solution to the problem.

Ausness has been a member of the UK College of Law faculty since 1973. He previously served as the inaugural associate dean for faculty research within the college from 2015-2018 and was appointed as a University Research Professor in 2019.

To listen to Carl Nathe’s “Behind the Blue” podcast with Richard Ausness, click here.