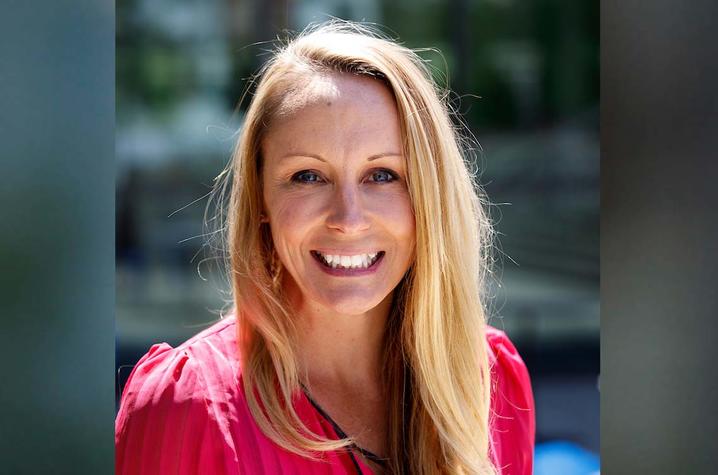 Melinda Ickes, Ph.D., is affiliated with the College of Education and the College of Nursing, where she serves as the co-director of the BREATHE initiative. Pete Comparoni | UK Photo.

LEXINGTON, Ky. (Nov. 19, 2021) — November is Lung Cancer Awareness Month. Each year, the American Cancer Society names the third Thursday of the month as The Great American Smokeout — a day when people who smoke across the country take the first step toward a healthier life.

According to the American Lung Association (ALA), Kentucky has the highest incidence rate of lung cancer in the country. As the University for Kentucky, we take tobacco prevention seriously.

Melinda Ickes, Ph.D., is director of graduate studies and an associate professor in the Department of Kinesiology and Health Promotion in the University of Kentucky College of Education. She is also affiliated with the UK College of Nursing, where she serves as the co-director of the Tobacco Policy Research Program of the BREATHE (Bridging Research Efforts and Advocacy Toward Healthy Environments) research team.

UKNow caught up with Ickes to learn more about her field of research, and how you can support your friends and family who may be struggling to quit smoking cigarettes or using other tobacco products.

UKNow: What is the goal of BREATHE?

Ickes: The mission of BREATHE is to promote lung health and healthy environments to achieve health equity through research, community outreach and empowerment, advocacy and policy development and access to health services. BREATHE is housed in the College of Nursing and is made up of an interdisciplinary group of UK faculty, community partners and other health professionals, led by Ellen Hahn, Ph.D.

UKNow: What made you want to get involved in tobacco prevention?

Ickes: My mom and grandma smoked when I was growing up. At the time, I didn't think much about it, because it was much more the norm. When I moved to Kentucky in 2010, I quickly realized that as a health promotion professional, it was imperative to understand why people continue to initiate and use tobacco products when we know the long-term health consequences. Sometimes things happen for a reason and meeting Dr. Hahn in 2010 helped open my eyes to the importance of understanding tobacco use from an individual perspective, but also how cultural norms, environmental influences and weak tobacco policies play such an integral role. I was immediately hooked and wanted to figure out how to support prevention efforts to truly make a difference.

UKNow: Why is yesterday’s Great American Smokeout important to the tobacco prevention movement?

Ickes: The Great American Smokeout is an opportunity to share what resources are available to help Kentuckians quit and to stay quit. Quitting smoking, vaping and other tobacco use is the single best thing a person can do for their health and well-being.

Additionally, The Great American Smokeout helps us educate youth on the dangers of tobacco use and where they can go to get help with quitting. It allows us to discuss what we can do as advocates to ensure we do not have future generations dependent on nicotine. It's our chance to speak up, fight for change, empower our young people to want better.

UKNow: Why is this movement important for young Kentuckians, specifically?

Ickes: Unfortunately, youth and young people in Kentucky are still at risk for tobacco use. Not only have we seen a surge in e-cigarette (electronic cigarette) use among these groups, but they are now more likely to be poly-tobacco and/or poly-substance users (use of more than one product). Now more than ever, we need support for tobacco prevention and strong tobacco policies. We should not want our youth to be the next generation dependent on nicotine. It's so disheartening to know there is an industry that targets and manipulates the future generations of our state.

UKNow: How does tobacco use impact Kentucky?

Ickes: Tobacco use continues to take a massive toll on the lives of Kentuckians. Currently, one in four Kentucky adults smoke cigarettes, with similar trends for e-cigarette use among Kentucky high school students. Tobacco use takes an enormous toll on our economy. Each year, Kentucky spends nearly $2 billion treating Kentuckians sick from smoking. In addition, employers spend $5,816 per year in health care costs and lost productivity for every employee who smokes.

While the rates of cigarette smoking have declined over the past several decades the gains have been inconsistent. Some groups smoke more heavily or at higher rates and suffer disproportionately from smoking-related cancer and other diseases. These populations tend to be those who experience inequities in multiple areas of their lives, including those at lower socioeconomic levels, those without college degrees, American Indians/Alaska natives, African American/Black communities, LGBTQ communities, those in the military and those with behavioral health conditions.

UKNow: What is the most important message you’d like to send readers about tobacco use?

Ickes: I encourage people to connect family, friends, colleagues and people of all ages in their community with quit resources. If you know someone who struggles with tobacco dependency, be empathetic and an encouraging support system.

UK is one of the 2,511 100% tobacco-free campuses in the United States. Our tobacco-free policy can be referenced here.