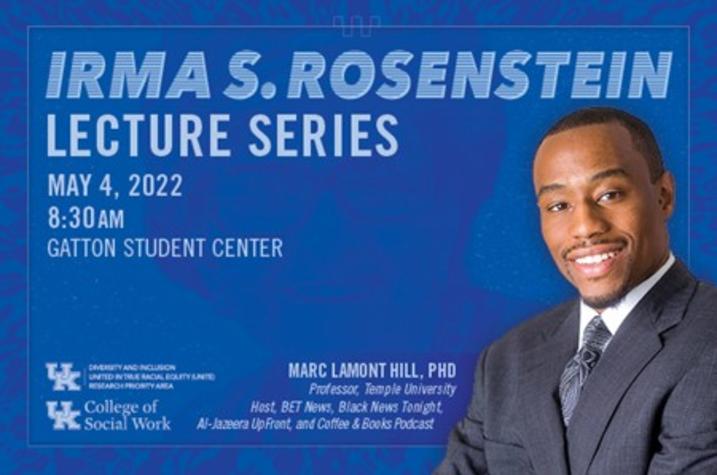 LEXINGTON, Ky. (April 20, 2022) — On Wednesday, May 4, the University of Kentucky College of Social Work (CoSW) will hold the 20th Annual Irma Sarett Rosenstein Lecture starting at 8:30 a.m. in the Gatton Student Center.

Additionally, the lecture will be part of the 2022 UNITE Research Showcase, which is centered around elevating and promoting the importance of racial equity research at UK, across the Commonwealth and beyond. The lecture and showcase are open to UK faculty, staff, students, affiliates and academic partners. While the event is free, registration is required for all attendees.

The lecture is named for Lexington social worker Irma Sarett Rosenstein. She led the fight against social injustice in Central Kentucky until her passing in 2015. The lecture, intended to celebrate Rosenstein's remarkable legacy, will feature one of the leading intellectual voices in the country.

Marc Lamont Hill, an award-winning journalist who currently hosts BET News and serves as a political contributor for CNN, will present the distinguished lecture. He is the Steve Charles Professor of Media, Cities, and Solutions at Temple University. Hill’s research focuses on intersections between culture, education and politics in the U.S. and the Middle East.

Since his days growing up in Philadelphia, Hill has been a social justice activist and organizer. He is a founding board member of My5th — a non-profit organization devoted to educating youth about their legal rights and responsibilities. Hill is also a board member of the Philadelphia Student Union.

Additionally, he works closely with the ACLU Drug Reform Project — focusing on drug informant policy. Over the past few years, Hill has actively worked on campaigns to end the death penalty and to release numerous political prisoners.

Hill has received numerous prestigious awards from the National Association of Black Journalists, GLAAD, and the International Academy of Digital Arts and Sciences.

Ebony Magazine has named him one of America’s 100 most influential Black leaders.

“We are extremely grateful to the Rosenstein family for their supporting what is sure to be a dynamic lecture by Dr. Hill,” Jay Miller, dean of the CoSW, said. “The Irma Rosenstein lecture series encapsulates all that is social work, and we look forward to continuing to being these experiences to our UK community for many years to come.”

More information and a full agenda is also available on the event website.

Rosenstein graduated from the University of Pennsylvania with a master’s degree in social work. She always cared deeply about the welfare of children, the most vulnerable population. Rosenstein was a social worker at the UK Chandler Hospital and taught in the College of Social Work where she worked closely with the first dean of the college, Ernest Witte. She brought an ethos of openness and clarity to community problems.

Rosenstein did not shirk from addressing racism. She was the driving force behind the Kentucky Conference of Christians and Jews, now called the Kentucky Conference for Community and Justice (KCCJ), an organization dedicated to building community and ending bigotry. Rosenstein hosted one of social work’s most prominent leaders, Whitney Young, at a KCCJ dinner when no public places outside of UK were desegregated.

"We appreciate the foresight of Irma Rosenstein to know the importance of bringing experts to our campus to interact with students, faculty and staff,” Miller said. "She left a lasting gift to the college by providing resources to support a lecture series that now carries her name."