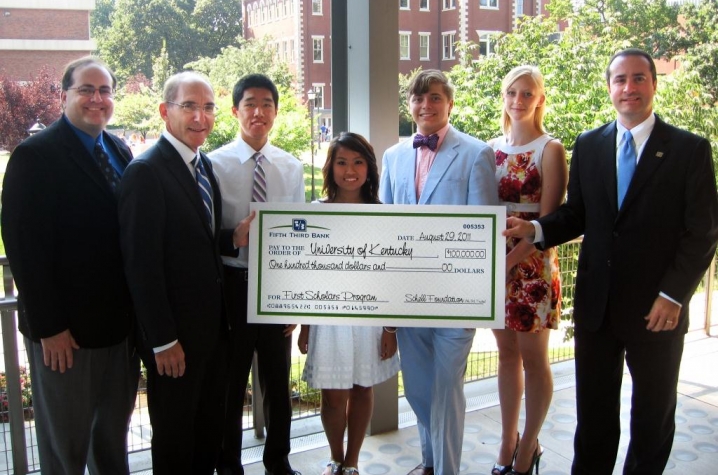 LEXINGTON, Ky. (Nov. 28, 2011) — University of Kentucky sophomore Macaulay Minton always knew he was going to college, and his acceptance into the First Scholars program played a major role in his decision to attend UK in the fall of 2010. UK's First Scholars program addresses the unique challenges of students who are the first in their families to attend college and supports them as they obtain a degree.

But while First Scholars paved the way for Minton to attend school last year, he found out that he needed a bit more help to make ends meet with tuition prior to school this fall. The Fulton County native was set to enroll again at UK this year, continuing his trek to law school and politics.

"I looked at my financial aid package, and there was a piece that was needed to make up the difference," said Minton, a community leadership and development and political science double major.

Thanks to the Charles E. Schell Foundation (Fifth Third Bank, Trustee), Minton and seven other First Scholars were each awarded $1,000 loans made available as part of a recent $100,000 grant awarded to the First Scholars program.

"I am thankful for the partnership and the community interest in the First Scholars' success," said Minton. "It's nice to have the support."

"One of the things in my research that has stuck with me is that if you remove all other factors – socioeconomic, gender and ethnicity – just the fact that a student is the first in his or her family to attend college puts that student at risk," said First Scholars director Matthew Deffendall. "Consistent support from throughout campus and the community is vital to the success of these students, and the Schell Foundation's generous funding will keep our First Scholars on campus."

The $100,000 grant from the Schell Foundation is payable in $25,000 increments over four years. The hope is that students will begin repaying their loans as soon as possible, so the program will continue to help other future students.

"Our students are overjoyed to have the additional fiscal support," Deffendall said. "This type of funding can make all of the difference in students deciding to return to school."

The First Scholars Program and the Schell Foundation plan to continue working together to support the Commonwealth's college students, which also directly coincides with the Council on Postsecondary Education’s plans to grant more degrees statewide.

"It's a team effort to get many of our students to graduation day," said UK Director of Corporate Relations Jan Swauger. "The business community is an important partner and through this generous grant, the Fifth Third Foundation is making an important investment in helping students succeed.”