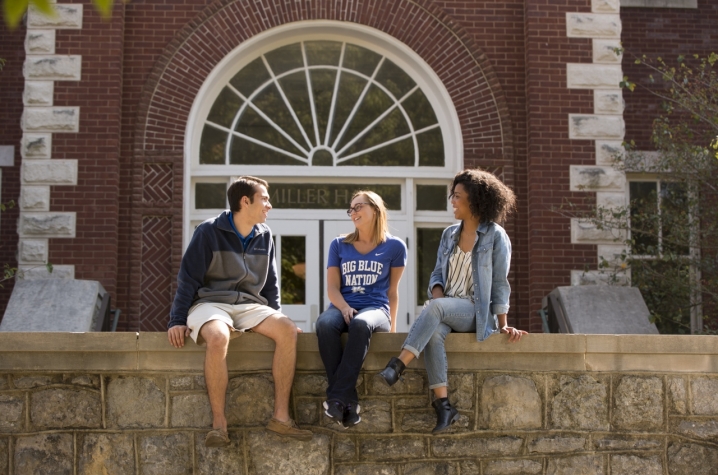 LEXINGTON, Ky. (Oct. 21, 2016) – As part of a bold move to improve graduation rates and meet the needs of the state, the University of Kentucky announced plans Friday to shift the balance of institutional scholarships to be more aware of – and focused on – need-based aid.

Specifically, over the next several years, under the UK LEADS initiative (Leveraging Economic Affordability for Developing Success), the university will move from awarding about 90 percent of its aid based on academic merit to a majority of aid being awarded based on financial need, officials told members of the Board of Trustees Friday.

The shift in focus will begin with the fall 2017 entering class and will not impact scholarships awarded to current students. The shift, though, directly aligns with UK’s recently adopted Strategic Plan, which contemplates aggressive moves in improving graduation rates to 70 percent and retention rates to 90 percent between now and 2020. The Board of Trustees unanimously adopted the Strategic Plan last October.

“We have made tremendous strides in the last five years in improving academic quality and diversity while growing the number of students we educate to meet the needs of our state and region,” said UK President Eli Capilouto. “But that’s not enough. We must move more quickly and more dramatically to impact student success. Unmet financial need is one of the – if not the – biggest obstacle to graduation and to being debt free.

For example, using scholarship and institutional awards at UK from 2015, more than $22 million of the $25 million in financial aid awarded to first-year students was based on academic merit. Under the UK LEADS initiative, more than $17 million would have been distributed based upon financial need; about $8 million would have been awarded based upon academic merit or other factors.

“President Capilouto and the Board of Trustees have made clear that we will make important strides in the coming years in retaining and graduating more students,” said Britt Brockman, chair of the university’s board. “That progress is a critical component of our overarching goal of becoming one of the premier public research universities in this country. It is also what our state is calling us to do as its flagship, land-grant university.”

Importantly, UK officials said, the shift doesn’t necessarily mean that if a student was eligible for aid under a system where merit aid is the predominant award that they won’t be eligible for scholarships where need-based aid represents the majority of assistance offered.

The moves were discussed during the UK board’s annual two-day retreat. The retreat focused largely on the progress being made on the university’s five-year strategic plan, which was endorsed last year by the board at its retreat. The plan focuses on making major strides between now and 2020 in research and graduation education, diversity and community engagement, and undergraduate education.

Moreover, in recent years, UK has grown its first-year class size to more than 5,100, its percentage of underrepresented students to an all-time high of more than 18 percent, and increased academic quality with annual totals of more than 100 National Merit finalist students, placing the university among the top 10 public institutions in the country.

But Capilouto and Tracy, who is leading strategic plan efforts in undergraduate education, believe a more dramatic and bold step is necessary to make progress more quickly in student success at all levels.

“We have made much progress. That is undeniable, but there is still much to do,” Tracy said. “From our analysis, we know that unmet financial need may be the single most important factor still remaining in determining whether a student is successful. In addressing that issue, with this shift in a strategic way, we are laying the foundation for our next ascent.”

Tracy cited the fact, from UK’s analysis of retention, that a steep decline in success occurs when a student’s unmet financial need exceeds $5,000.

“We will still be providing significant aid based upon academic performance, but beginning in Fall 2017 we will shift more of our efforts in a strategic fashion toward financial need,” Tracy said. “This is part of a holistic effort to focus intentionally and comprehensively on student success at all levels.”

Tracy said the university has been examining its scholarship program for more than a year as part of what has become a realignment of the provost’s areas that focus on student success. Within the last several months, Tracy has merged student affairs and undergraduate education as part of an effort to invest more resources in student success efforts.

The goal is to key in on what Tracy says are the four pillars – or most important elements – undergirding student success: academic success, financial stability, belonging and engagement and wellness. With those pillars anchoring the realignment of the academic enterprise, Tracy has recently announced plans to add eight licensed clinicians to the 13 already in place and an additional 30 academic advisors on top of about 54 currently at UK. Career counselors, case managers and personnel at the university’s Violence Intervention and Prevention Center also are being added.

Tracy now is also examining other areas of his office, such as Enrollment Management and the Center for the Enhancement of Learning and Teaching (CELT), to focus even more intently on student success and teaching innovation. That part of the realignment will take place over the next 12 to 18 months.

To view Tracy's presentation to the UK Board of Trustees on student success measures click here, or on the attachment below.

UK is the University for Kentucky. At UK, we are educating more students, treating more patients with complex illnesses and conducting more research and service than at any time in our 150-year history. To read more about the UK story and how you can support continued investment in your university and the Commonwealth, visit  uky.edu/uk4ky. #uk4ky #seeblue