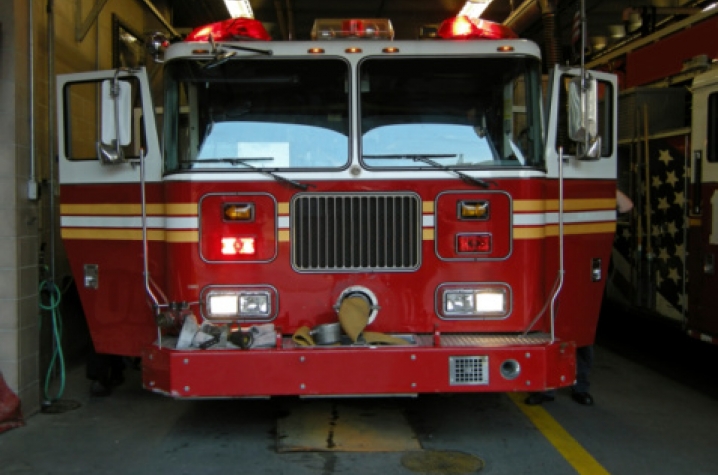 “The University of Kentucky would like to thank Governor Beshear for proclaiming September Campus Fire Safety Month,” said Williamson. “College fire officials throughout the state strive every day to educate our students, faculty and staff about the dangers of a fire situation and fire prevention. Campus Fire Safety Month gives every fire official the forum in which to spread the message of ‘Get Out and Stay Alive’.”

Smith noted that of 28 fires on UK's campus last year, eight occurred in or near student residences.  "Due to the quick, often heroic actions, of our Lexington firefighters, our campus community experienced no death or injury," Smith said.  "We want to assure that number remains at zero."

Following the ceremony, UK students were invited to test their virtual skills at putting out a digital “fire” with “fire extinguishers” equipped with a laser beam. The equipment, recently acquired thanks to a grant from the Firehouse Subs Public Safety Foundation, will be a part of the weekly events scheduled by the UK Fire Marshal Office. The events, to be held every Wednesday in September, feature:

Campus Fire Watch statistics indicate that from January 2000 to the present, more than 134 people have died in campus-related fire incidents nationally.

·        84 percent of these incidents occurred in off-campus housing

Three of the most common factors contributing to these statistics are:

Reminding students that it takes only 30 seconds for a fire to double in size, the UK Office of the Fire Marshal and Kentucky’s Division of Fire Prevention offer the following safety tips for students:

·       Make yourself familiar with college or university policy on improper use of appliances, decorations, smoking, and candles.

·       Familiarize yourself with what your response will be in the event of a fire and practice your response.

·       Do not play jokes with fire alarms. False alarms get people hurt.

·       Never neglect a fire alarm signal as a false alarm. Respond to every alarm as an actual fire event.

·       Alcohol use has been strongly associated with fire fatalities.

·       Take personal responsibility for your safety.

Smith urged all students to attend the campus fire events and pay close attention to fire safety information.  "These are valuable life-saving skills our students must learn to protect themselves and others in the case of fire now, here on campus, and later as we take our roles as community leaders," Smith said.