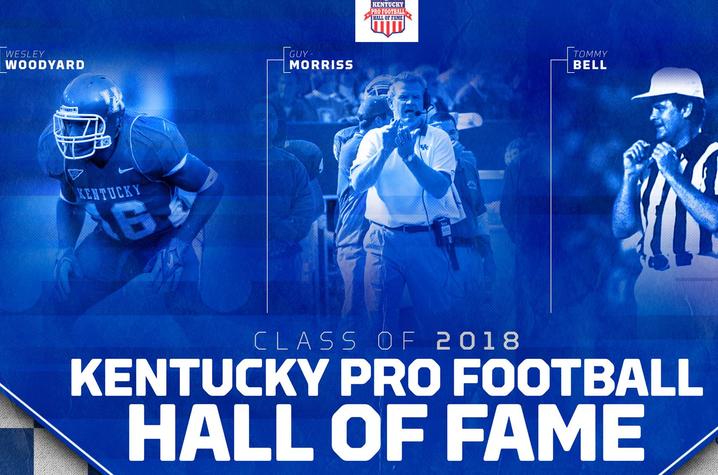 The ceremony begins 7 p.m. and tickets can be purchased here: http://kyprofootballhof.org/.

Woodyard was one of the best defensive players and team leaders in Kentucky history. He totaled 395 tackles in his four-year career, which currently ranks seventh in school history. He led UK in tackles three straight years, with at least 100 stops each of the three seasons.

Woodyard was the unquestioned leader of the defense as the Wildcats posted eight-win seasons and won the 2006 and 2007 Music City Bowls, leading the team in tackles in both bowl triumphs. Because of his prowess, he was a first-team All-Southeastern Conference selection as both a junior and senior. He was a second-team Sophomore All-American and was a key contributor in special teams kick coverage. As a freshman, he was named first-team Freshman All-SEC. In addition to his success on the field, he excelled off the field as well as a member of the SEC Academic Honor Roll and of the prestigious UK Athletics Society of Character.

Woodyard, who also is a member of UK Athletics Hall of Fame, has played 10 years in the NFL with Denver and Tennessee. He is entering his fifth season with the Titans. One of his best-known attributes is that he has been elected a team captain at all levels: in high school at LaGrange (Georgia), at Kentucky, and with both of his NFL clubs.

Morriss coached Kentucky in 2001 and 2002, finishing 2-9 in 2001 and 7-5 in 2002. He left UK after the 2002 season to become the head coach at Baylor University. He returned to the Bluegrass briefly as an assistant at Kentucky State University in 2008 before taking on the head-coaching duties at Texas A&M University-Commerce for four seasons (2009-12).

Morriss once again returned to the Bluegrass but this time to coach in the high school ranks. He was as an offensive line coach at Warren Central in 2014 and at Lexington Catholic in 2015.

Morriss’ playing career was remarkable. He played college football at Texas Christian University and spent 15 seasons as an offensive lineman in NFL with the Philadelphia Eagles (1973–1983) and the New England Patriots (1984–1987). Morris played in over 200 regular season games during his NFL career and started at center for the Eagles in Super Bowl XV.

After his playing days were over, Morriss made the transition to coaching. He got his coaching start in 1988 as the offensive line coach for the Patriots under Raymond Berry. In 1992, after a brief stint as the head coach of the Washington Marauders of the Professional Spring Football League, Morriss coached under Hal Mumme and alongside Mike Leach at Valdosta State University before re-joining Mumme at Kentucky in 1997, where he was the school's offensive line and assistant head coach.

Bell is best known for his 15 seasons as an NFL official, 1962-76. He officiated in two Super Bowls, two NFL championship games (prior to the NFL-AFL merger) and six AFC or NFC championship games. He played freshman football at UK under Coach Paul “Bear” Bryant, eventually becoming a college football and basketball official before going to the NFL. He is the only person who has officiated in the Super Bowl and the NCAA Final Four.

Having earned his undergraduate and law degrees at UK, Bell served on the UK Board of Trustees and the athletics board. He also was a commentator on UK football radio broadcasts.