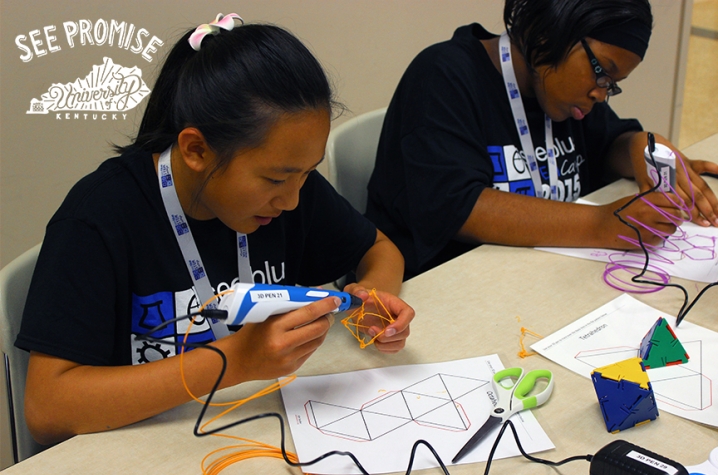 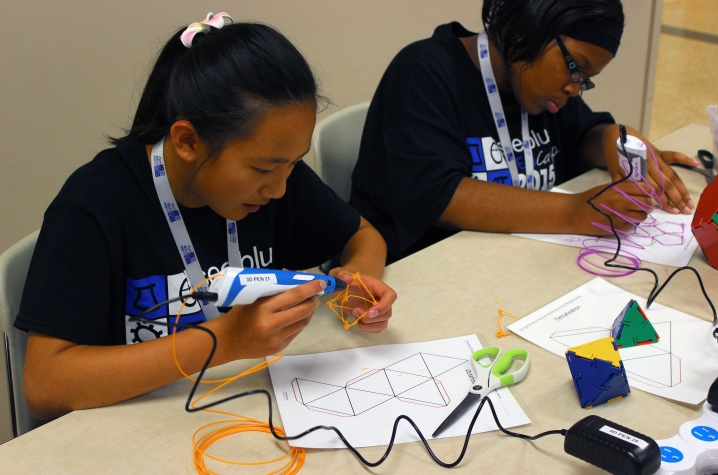 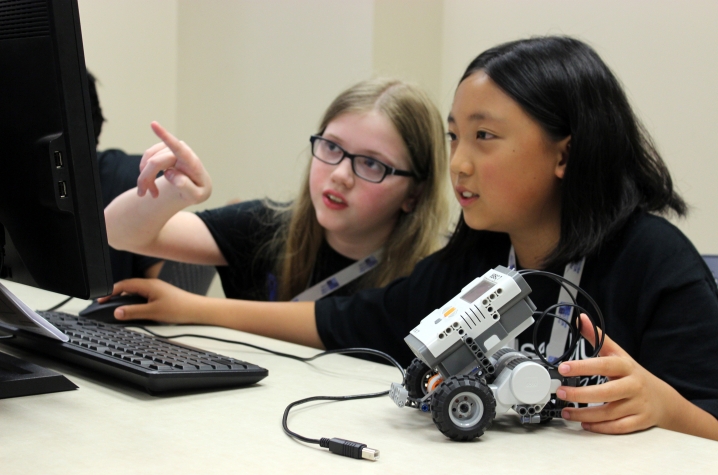 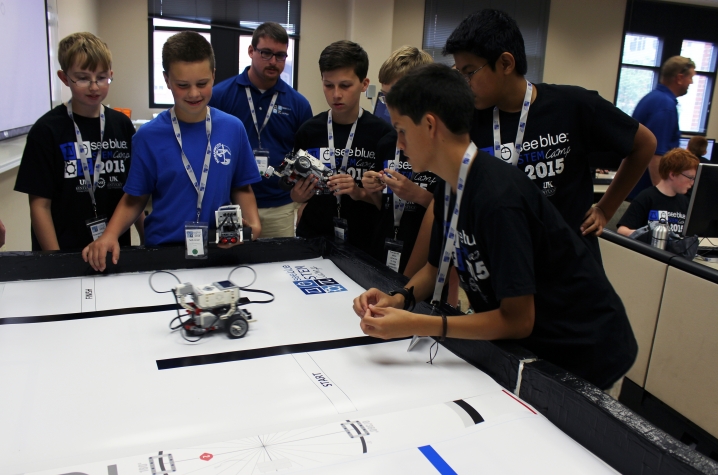 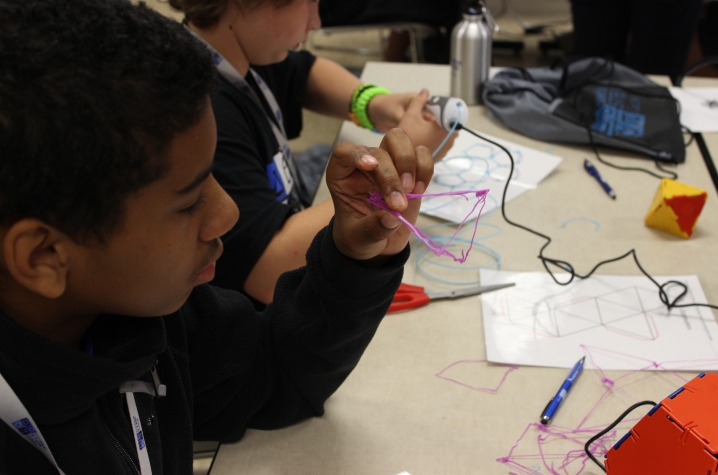 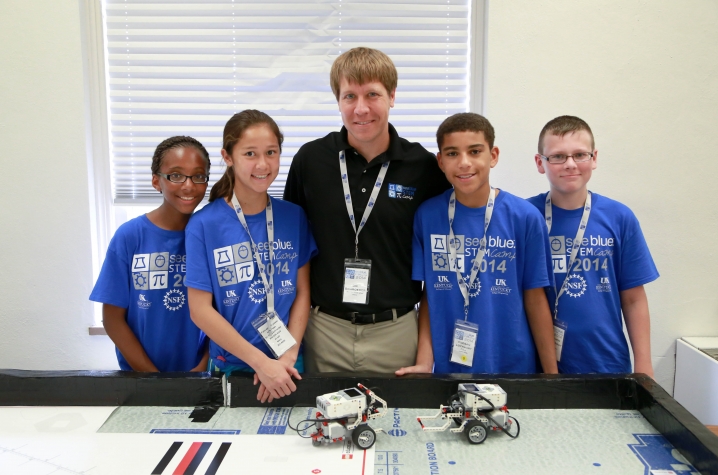 LEXINGTON, Ky. (June 11, 2015) — During his childhood in Burnside, Kentucky, Craig Schroeder was always taking things apart and trying to fix them — a tinkerer.

“Most of the time I was unsuccessful, but occasionally I was able to repair my remote control car or video game console,” Schroeder said. “I have an innate drive to fix things or make them work properly.”

Schroeder has been a STEM teacher since 2002 and will be teaching physics at Henry Clay High School in Lexington this coming fall. On summer vacation a few years ago, he picked up some Malcolm Gladwell books. Gladwell’s theories inspired the tinkerer in Schroeder.

In “Outliers,” Gladwell says innate talent is not the only key to success. For instance, what advantages took place in the childhood of a Thomas Edison or Mozart? Seemingly small things can make a big difference.

Schroeder started tinkering with ideas about what advantages he could create for students. For instance, Bill Gates has innate talents and abilities — but he also had the good fortune of growing up near a high school where he accessed a powerful computer at age 13.

Soon, Schroeder’s idea for See Blue STEM Camp at the University of Kentucky was born (STEM stands for science, technology, engineering and mathematics). At camp, rising fifth through eighth grade students take part in hands-on projects with real world applications, bringing STEM subjects to life. Plus, dozens of UK students help with the camp to gain teaching experience, receive mentorship from faculty, and witness the powerful impact of the camp’s unique teaching approach.

The 2015 camp is taking place on campus this week. Complete with a LEGO robotics competition, geocaching on campus, and learning the magic of materials science, designing and modeling with 3D printing pens, students will engage with engineering, mathematics, science and technology instruction.

A UK College of Education graduate himself, Schroeder's dissertation research focused on attitudes toward mathematics, knowing that middle school years are a pivotal time in developing positive attitudes toward any subject.

"Many students are turned off to mathematics and science during this time and have limited ideas of careers that are in these fields," Schroeder said.

Working with his wife, Margaret Mohr-Schroeder, professor in the UK Department of STEM Education, and Walcott, they moved the camp to UK and opened it to any student in Kentucky. By bringing the camp onto campus, the students are able to visit professors in their labs and conduct experiments and research that could not be duplicated in another setting.

And the camp is not just for those students who are known to already excel academically. Instead, thanks to collaboration with youth service coordinators across the state, Schroeder and his team identify underrepresented students who would benefit from the camp. They target any student who may have an interest in STEM or whose teachers believe would benefit from the camp.

"This authentic experience has led to statistically significant growth in students’ interest in STEM," Schroeder said.

In the fall of 2013, the camp was awarded a National Science Foundation grant for $750,000 over the course of five years. During this time, they are tracking the students in the camp to see how they fare in terms of their interest in STEM careers.

"While this camp won’t fully solve the problem that Gladwell outlined, it does help to provide a solution," Schroeder said.

Schroeder also realized the need for a solution in his own classroom after his first year of teaching.

"I knew I wasn’t an effective teacher with all students, and I wanted to be better," he said.

So he enrolled in the UK College of Education master's program, armed with a year of experience and willingness to learn. After finishing, his mentor, Doug Jones, a former UK faculty member, convinced him to pursue his Rank I, which is 30 hours beyond the master's degree. At the end of his second year, he had only a handful of hours remaining for the Ph.D. "So I decided it was now or never," he said.

While some may have expected him to begin working as a professor or in administration after earning his doctoral degree, Schroeder returned to the classrooms of Fayette County to put his new training and skills to the test. Eight years later and he is still there.

"With my academic background and connections, I have developed a cadre of great researchers and educators that share my passion for STEM and reaching underrepresented populations," Schroeder said. "I’m able to publish and share innovative instruction with others across the nation."

Schroeder says his ambition to go above and beyond as a STEM educator comes from his parents.

"Both grew up in poor families in rural communities, but they didn’t let that set them back," he said. "They instilled in me a drive to do the best I can."

And he continues that today, not only with his family, but with his students.

"I’m recently a father and I want every opportunity for my children as well," he said. "I think it has driven me even more in my professional work. I don’t want any parent to have the perception I am not fully extending myself to help a student."