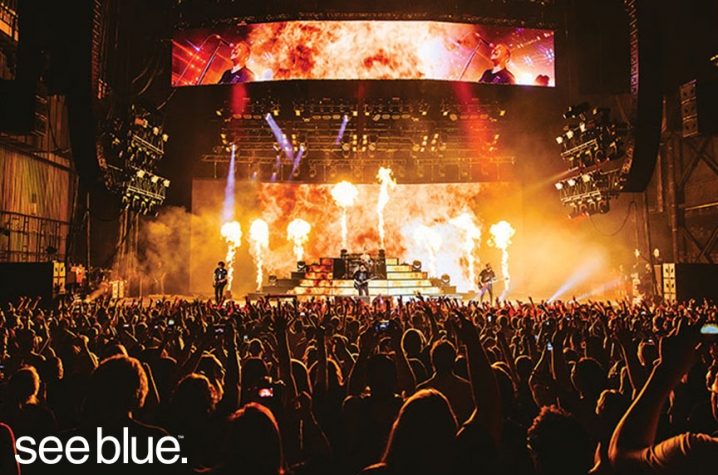 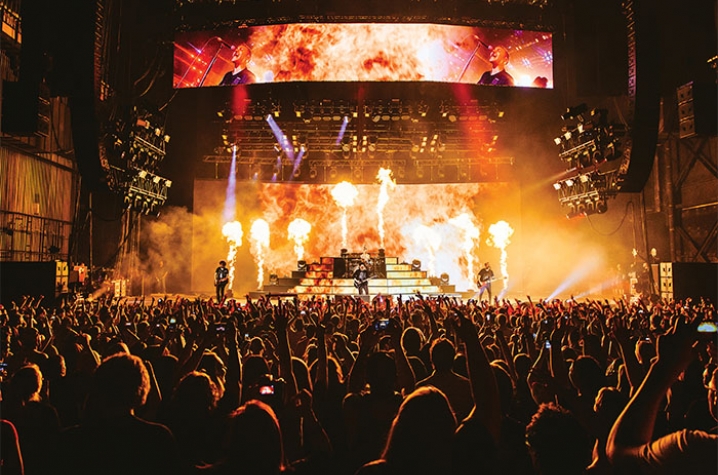 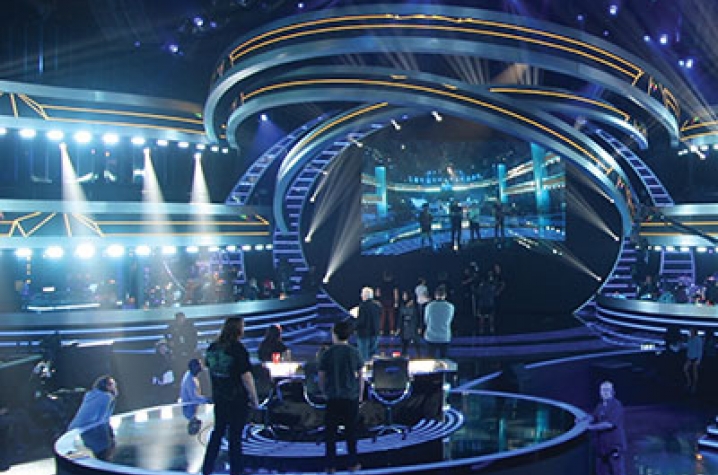 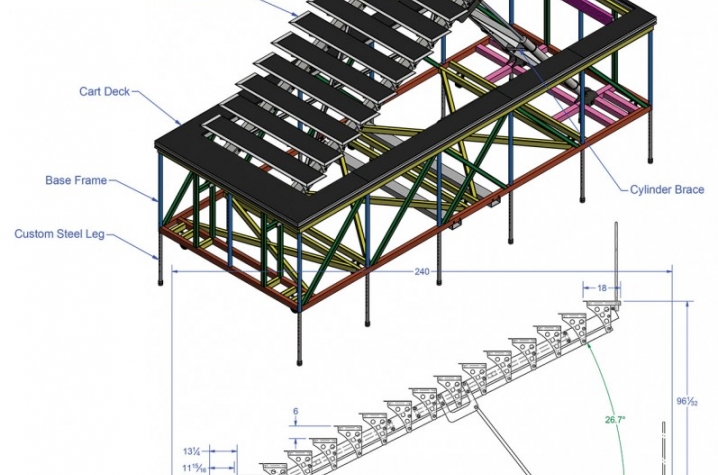 LEXINGTON, Ky. (Jan. 26, 2016) — If you have a major production in the works and want to make it memorable, University of Kentucky mechanical engineering alumnus James Casalino can make it happen. Want a video wall to pop out of the stage? No problem. Want a three-story seating area for an audience? They’ve done it. Rising staircases, wrap-around stages, structures that seem to appear out of thin air? Why not? This is the outfit that has constructed the Super Bowl halftime show set for the past five years.

Casalino leads the drafting and design team at All Access Staging Productions located in Los Angeles. In addition to Super Bowl halftime shows, Casalino has designed sets for concerts, television shows, awards ceremonies, political conventions and more. It is not a job for the faint-hearted.

“Clients give us conceptual designs for ideas like ‘floating drum riser’ or ‘stair that appears out of the stage’ as well as other structures that at first glance would seem impossible to actually build,” describes Casalino. “Then it’s our job to turn those artistic ideas into reality.”

No matter how crazy the inspiration or imminent the deadline, he and his team fight the impulse to freak out and, instead, put their training and talent to work. After all, they can’t say no.

“I used to have a saying that I would only do the impossible once a day,” Casalino says laughing. “Then my boss asked, ‘Who told you it could only be once a day?'”

Do the impossible. That’s the job.

Perhaps Casalino isn’t averse to spontaneous requests because he has been known to make them himself. While visiting the University of Kentucky as a high school student from just outside Chicago, he showed up at the College of Engineering on a whim. He had no appointment and no contacts. Fortunately, electrical engineering Professor Bruce Walcott dropped what he was doing and gave the Casalino family a personal tour of the college.

“There was a friendliness at UK that I loved,” Casalino reminisces. “I felt like if I went to Kentucky, I would be more than just a name or a number, but rather part of a community.”

As with many engineers, Casalino grew up with an interest in how things work, taking apart plenty of remote control cars along the way; however, he also nurtured his artistic side through theatre — both on the stage and behind the scenes. Particularly, he loved building the scenery for the productions; however, when it came time to choose a major, he was concerned about the tenuous job security of professional theatre and opted for mechanical engineering.

“I went into mechanical engineering mainly out of curiosity. Just as many people see doctors, and say ‘I wish I could do that,’ I saw robotics and everyday products, and thought, ‘I wish I could design that,'” he remembers.

Drawn primarily to project-based classes that resemble the real world experience of working in teams, Casalino enjoyed his education and learned valuable skills; yet he discovered that he missed the energy of stage production. He wondered if he could apply what he was learning to find employment with Disney Imagineering or a cinematic special effects company. After conducting preliminary research, Casalino hand-wrote approximately 50 letters to every special effects company in the Los Angeles area, asking for an internship. Of the 50, only four responded. But two offered an interview and during the 2004 Spring Break, Casalino flew to L.A. to interview with All Access. After the interview, they offered him a summer internship.

The week before he arrived, one of the two principal drafters in the company left. Immediately, Casalino was thrust into the action, working directly with the principal designer and drafter on concert tours. Among the 25-30 projects he worked on that summer, his two biggest undertakings were the “American Idols Live” tour and Rascal Flatts' “Here’s to You” tour. Casalino excelled. Just before his internship ended, he divulged a secret to his co-workers: he had never before been to a live concert — at least not one at a venue larger than a county fair. Thrilled with his work, All Access asked him to stay. Although it had been an amazing internship, Casalino was determined to finish his degree and declined.

But seeds had been sown. Before graduating, Casalino sent letters once again to the same 50 or so special effects companies in Los Angeles. This time he interviewed with three companies, but it was All Access that gave him the best offer. In the summer of 2005, he moved to California for good.

All Access has been doing the Super Bowl Halftime Show set construction since 2011 and Casalino says each year poses unique challenges.

The list of shows and events Casalino has contributed to is impressive, crammed with familiar names: The “Monster” tour featuring Eminem and Rihanna, tours by Van Halen and Rascal Flatts, "American Idol," "Dancing with the Stars," the World Poker Tour, the 2006 Grammy Awards, "Are You Smarter Than a Fifth Grader?" and more.

When he thinks about how an engineering degree helped him get into such an exhilarating field, Casalino speaks positively of his experience at UK.

“I believe the UK College of Engineering helped open doors for me," he said. "Even with all of the challenges I have had in my job, getting my engineering degree was the hardest thing I have ever done — and also one of the most rewarding. I am so thankful for the time I spent at UK and all of the great people who were a part of my education.”

When he isn’t conjuring the impossible, Casalino enjoys spending time with his wife, Meredith, daughter, Hannah, and dog, Rocket Toes. When time permits, he engages in photography as a hobby. While it hasn’t worked out to make it back to campus since he graduated, Casalino keeps in touch with friends and faithfully follows Kentucky basketball, even keeping a conspicuously out-of-place Kentucky flag in his office.

So what is next for James Casalino? There isn’t a whole lot in his industry that he hasn’t done. When asked, he admits that while he has done design work for almost every kind of major production possible, there is one event he would love to be a part of someday, a landmark show that would not only hold the rapt attention of the nation, but the entire world — the opening ceremonies of the Olympic Games.