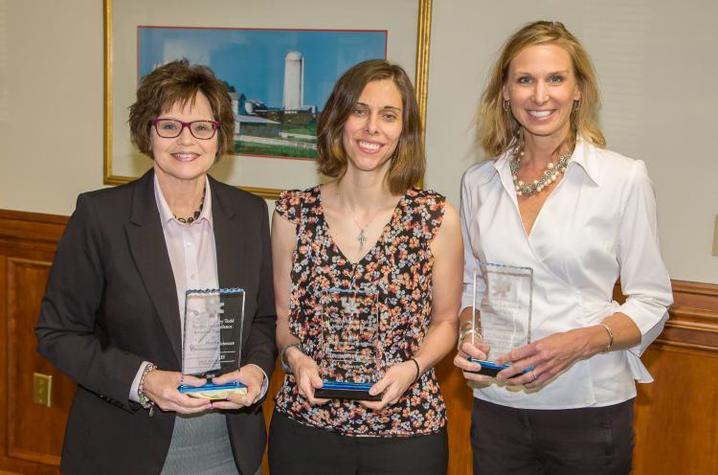 Todd is a school alumna and wife of former UK president Lee T. Todd Jr. The 2019 awards recognize individuals who exhibit excellence in leadership in extension, teaching and research within the school, which is a part of the UK College of Agriculture, Food and Environment.

“Excellence can be found at every level in the School of Human Environmental Sciences,” said Kim Henken, acting director of the school. “From outstanding students to superior faculty and staff to exceptional extension agents, it is a privilege to honor their accomplishments.”

Extension: Jill Harris. The Todd County family and consumer sciences extension agent has provided quality educational programming to local residents for the past 30 years. As a leader of The Coalition for a Healthy Todd County, Harris worked with the local health department to develop and deliver programs aimed at reducing and preventing obesity among her county’s population. In another effort to promote physical activity and healthy living, she is working with local partners to develop the Elkton Pedestrian and Bicycle Plan. She served as president of the Kentucky Extension Association for Family and Consumer Sciences in 2018.

Research: Dawn Brewer. Since joining the Department of Dietetics and Human Nutrition in 2012, Brewer, an assistant professor, has been a co-investigator or collaborator on external research projects worth more than $1.9 million. Much of her research involves obesity prevention and reduction. She has also secured $75,000 for her research through internal grants and awards. Brewer is the director of the department’s Didactic Program in Dietetics. She teaches at least two courses each year and serves as an academic advisor to students. While she does not have a formal extension appointment, she has developed two extension curricula from her research findings.

Outreach and Academic Enrichment: Amy Kostelic. As an associate extension professor, Kostelic steps outside of the boundaries of a typical classroom experience, taking her students on field trips, inviting guest lecturers and offering hands-on learning opportunities. Her aging simulation program, which gives students a device that simulates an age-related health challenge, has been extremely successful. In addition, she has coordinated education abroad opportunities to allow her students to learn about healthy aging in other countries and cultures. In her extension appointment, Kostelic leads the Embracing Life as We Age initiative. She has authored or co-authored more than 300 print and electronic extension publications and releases. Kostelic was part of a team that developed and expanded the Keys to Embracing Aging program, which received national recognition in 2018.

During the ceremony, the school also recognized its outstanding students. Award winners include: