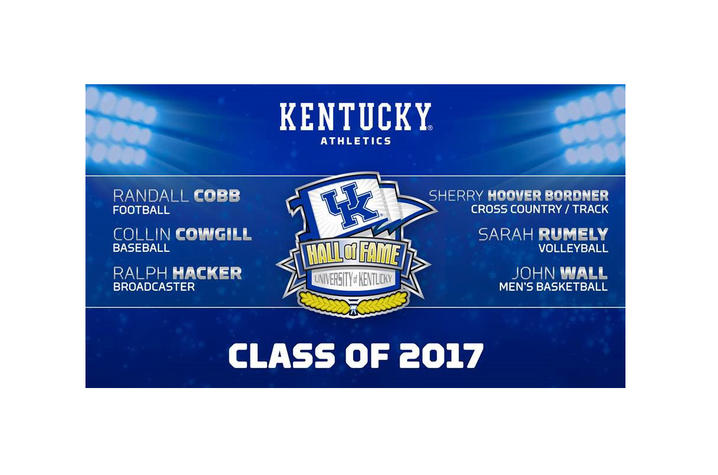 A seven-time All-America honoree, she won SEC (Southeastern Conference) championships in the mile and on a pair of relay teams during her career. Hoover Bordner set 10 school records during her career, including outdoor records in the 800- and 1,500-meter runs, 4x800 meter relay and the distance medley relay, and indoor records in the 1,500 meter run and 4x800 meter relay. She broke the outdoor freshman record in the 800 meters and indoor freshman records in the 1000-yard run, 1,500-meter run and the mile. Hoover Bordner was a ember of the 1988 national champion cross country squad, which remains the only women’s national championship team at UK.

Arguably the most versatile, dynamic playmaker in UK football history as a wide receiver, quarterback, punt returner and kickoff returner, Cobb was named First-team All-America as a junior. He also was two-year first-team All-SEC. Cobb set the SEC single-season record for all-purpose yardage (2,396 yards in 2010) and the UK career record for touchdowns (37), although he played only three seasons. A clutch player, he scored five game-winning fourth-quarter touchdowns in his career, vs. University of Arkansas, University of Louisville and University of South Carolina at home, also at Auburn University and University of Georgia. Cobb left UK after his junior season and was a second-round draft pick by the Green Bay Packers. He has been a star wide receiver during his six-year career with the Packers, making the 2011 NFL All-Rookie Team and being selected to the Pro Bowl following the 2014 season. Cobb returned to UK and finished his degree.

One of the top players in Kentucky baseball history, paced UK from a last-place finish in 2005 to its first-ever SEC Championship in 2006. Cowgill was named First-team All-America in 2008 by the National Collegiate Baseball Writers Association, leading UK to a then-record 44 wins and a berth in the NCAA Tournament. He was also selected first-team All-SEC by the league coaches. A two-time Academic All-America selection, Cowgill ranks among the UK career leaders in runs, homers, RBI, walks, on-base percentage, sac bunts, sac flies, hit by pitches and steals. He was a fifth-round pick by Arizona in the 2008 MLB Draft. Cowgill reached the majors in 2011 and has played for the Diamondbacks, the Oakland Athletics, the New York Mets, the Los Angeles Angels and Cleveland Indians.

Hacker spent 34 years on the UK Radio Network. He served as the men’s basketball analyst for many years with legendary broadcaster Cawood Ledford. Following Ledford’s retirement, Hacker took over play-by-play duties for eight years, including UK’s 1996 and 1998 national championship seasons. Hacker was the play-by-play voice of the Wildcat football team for five seasons. During his time as president of HMH Broadcasting, he built a prominent network that featured then-UK flagship station WVLK. Hacker, also hosted head coaches’ pregame and postgame shows, as well as the weekly “Big Blue Line” call-in shows. All totaled, he was on the radio call for three men’s basketball national championships, seven Final Fours and four football bowl games.

Rumely is the only player in program history to be named SEC Freshman of the Year (2006) and SEC Player of the Year (2008). She earned two-time AVCA All-American, four-time All-SEC, and Academic All-American third team honors. Rumely led her team to the NCAA tournament four times, including the Sweet 16 in 2009. She finished her career owning UK records in career assists (5,703) and aces (165). Her 5,703 career assists also ranked fifth all-time in SEC history. Rumely capped her career ranking in the top 10 in sets played (third), block assists (ninth), digs and attack percentage (10th). She is the only player to record a triple-double in a match in program history (10 kills, 56 assists, 18 digs vs. Ole Miss (University of Mississippi)). Rumely led her team to a No. 7 national ranking in 2009. After UK, she played professionally overseas. Rumely is currently an assistant coach at Louisiana State University.

Wall was the first national player of the year in program history as winner of the Adolph Rupp Trophy. He was named 2010 USBWA National Freshman of the Year, Consensus first-team All-American, 2010 SEC Player of the Year by Associated Press and SEC Coaches, SEC Freshman of the Year by the AP, First-team All-SEC and SEC Tournament MVP. Wall led UK to a No. 1 national ranking, SEC regular-season championship and the SEC Tournament championship. He set single-season assists record with 241 assists (broken in 2016 by Tyler Ulis) and averaged 16.6 points and 6.5 assists. Wall was the first No. 1 overall NBA Draft pick in UK history. A four-time NBA All-Star through his first seven seasons, he has averaged double-figure scoring every season. Wall was tabbed third-team All-NBA in 2017. He is the Washington franchise career leader in assists and steals.

The UK Athletics Hall of Fame was started in 2005 to recognize and honor persons whose participation and achievements enriched and strengthened the university’s athletics program. The charter class included 88 individuals who had previously had their jersey retired by UK.

There is a five-year waiting period after leaving UK to be eligible for inclusion into the Hall of Fame. A committee consisting of Hall of Famers, media members, campus representatives and current coaches and administrators elects new inductees each year.