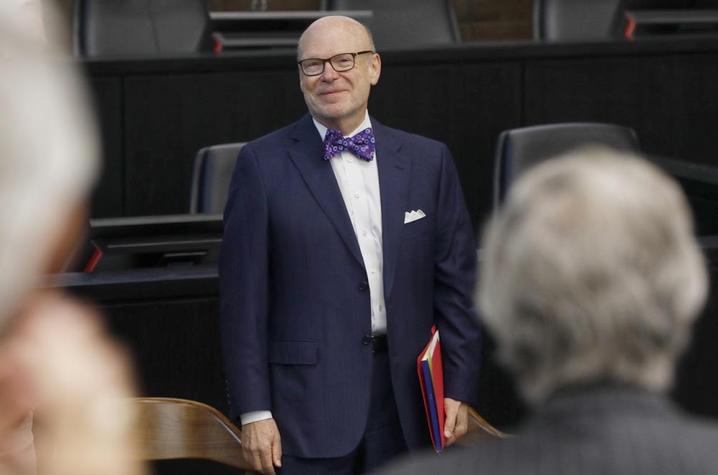 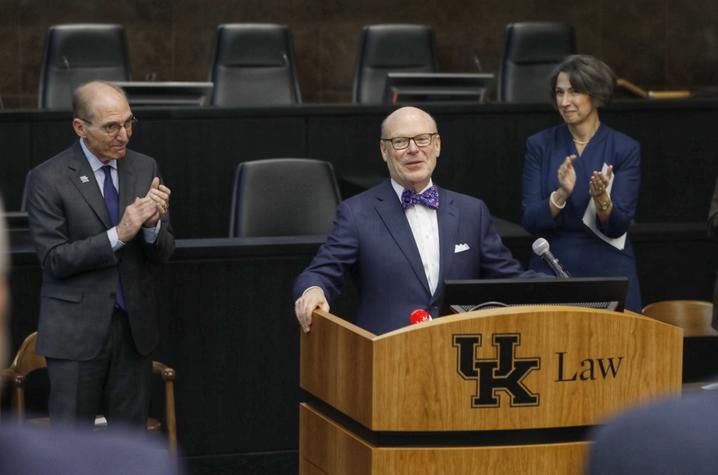 LEXINGTON, Ky. (Nov. 8, 2019) — Growing up in Lexington, J. David Rosenberg learned about the power of education to transform lives and create opportunities. It was a lesson solidified in his mind as a student in the College of Law at the University of Kentucky.

There, in the early 1970s, under the tutelage of UK faculty legends like Rutheford (Biff) Campbell, Robert Lawson, William Fortune, Alvin Goldman, Paul Oberst and Burt Ham, Rosenberg found a combination of outstanding legal education and intellectual rigor — attributes that would inform and guide his work as one of the region’s leading attorneys for the last several decades, specializing in areas of corporate finance, venture capital, banking and reorganization.

On Friday, the University of Kentucky announced a historic $20 million gift to the College of Law from Rosenberg and his wife, Dianne, who live in Cincinnati. The gift is the third largest single donation in university history. David Rosenberg credits his legal education at the University of Kentucky for his success and leadership roles in law, finance and his community. The gift will further strengthen the academic excellence of the College of Law by supporting scholarships for outstanding students and efforts to recruit and retain world-class faculty.

“There is a saying that ‘education is an unfinished symphony,’” Rosenberg said in announcing the gift Friday in the College of Law’s new G. Chad Perry III Grand Courtroom. “We make music to stir hearts and minds, to force us to remember, and compel us to commit to each other and to ideas larger than ourselves. We invest in education — to honor those upon whose shoulders we stand who made our success possible, but also as an investment of faith in the future, the idea that what these students will compose and create as lawyers and leaders — ideas, laws and public policy — will deepen not only our understanding of the law, but how our society can be more just.”

UK President Eli Capilouto will recommend to the University Senate and Board of Trustees that the College of Law be named the University of Kentucky J. David Rosenberg College of Law. It would be UK’s third named college, in addition to the Gatton College of Business and Economics and the Lewis Honors College.

“Success has many mothers and fathers. Today’s historic gift and event remind us of that truth once again. David’s gratitude for the education he received — and his deep commitment to the idea that those who follow him should receive the same potential for transformative education — is why we are here today,” said President Capilouto. “I have been enriched by getting to know David and Dianne and by their passion for education, for this place, and for the communities, ideas and institutions to which they have so passionately given their time, talents and resources over many years. Their gift today reminds us of how vital and fundamental teaching and education are in shaping us, guiding us and opening up to all of us the powerful idea that anything is possible.”

The College of Law was founded in 1908. It was one of the nation’s first state law schools. The College of Law is housed in a recently renovated state-of-the art building. The new, $53 million facility will be formally dedicated later this month. The college has routinely been named among the best values in legal education. Recently, National Jurist Pre-Law Magazine named it No. 5 for best value. Its law journal — Kentucky Law Journal — is among the oldest and most established in the country. In 1913, the college established the nation’s first law school trial practice program.

In making this gift, Rosenberg cited the university’s established record of intellectual and educational excellence in preparing students for careers in the law and public service. His endowment will focus on scholarship opportunities for future generations of UK law students and faculty support as the college seeks to retain and recruit outstanding legal scholars.

The Rosenberg College of Law Endowment will:

The historic gift announced Friday is a tangible symbol of a life of service, commitment and giving to their community by Rosenberg and his wife, Dianne. They are well known in Cincinnati for their investment and leadership in the Jewish, civic and arts communities. David Rosenberg serves on the boards or committees of the Jewish Foundation of Cincinnati, the University of Kentucky College of Law Visiting Committee, the Greater Cincinnati Foundation, Isaac M. Wise Temple and the Music Hall Revitalization Company. He has been active as a leader in the corporate world, serving on a number of boards of publicly traded and privately owned businesses. In 2001, he and his wife shared the “Peace of the City Award” in Cincinnati.

In recent months, the couple underwrote an original opera based on "Blind Injustice," a book by Mark Godsey, co-founder of the Ohio Innocence Project, a program affiliated with the University of Cincinnati College of Law that has led to the exoneration and release from prison of nearly 30 individuals wrongly convicted and incarcerated for crimes they did not commit — one of the most successful such efforts in the country. They recently funded the commission by the Cincinnati Symphony Orchestra of Symphony No. 6 by Christopher Rouse that premiered at the CSO last month.

To view the event, please visit: