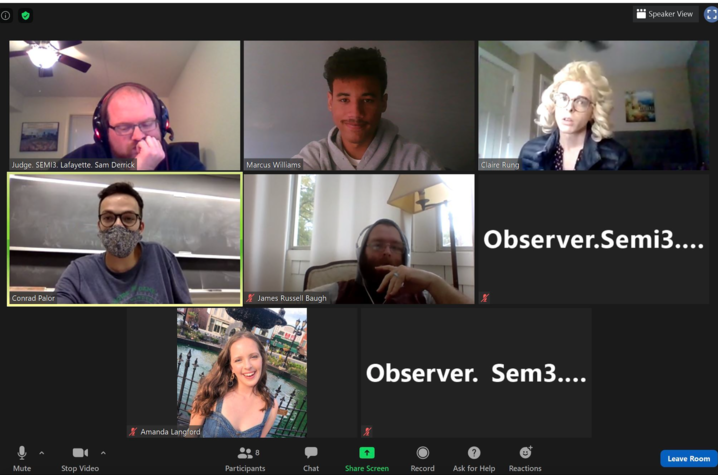 The UK Intercollegiate Debate Team, started the 2020-21 debate season like the past eight, with at least a Sweet 16 showing.

LEXINGTON, Ky. (Oct. 2, 2020) — The University of Kentucky Intercollegiate Debate Team, housed in the College of Communication and Information, started the 2020-21 debate season like the past eight, with at least a Sweet 16 showing.

The season opener, hosted by Northwestern University, showcased 126 teams from 22 states and was the first major online college tournament in history. The Kentucky partnership of Chris Eckert (sophomore) and David Griffith (freshman) went 5-1 and were ranked ninth after three days of preliminary debates, including impressive wins over Gonzaga, Berkeley and Kansas. In the elimination rounds UK defeated Michigan State in the round of 32 before falling to Wake Forest on a 2-1 decision in the round of 16. Dartmouth was the eventual champion.

The second tournament was the Western Kentucky University Fall Invitational, a virtual debate tournament with 50 competitors from 12 states. The field included a strong group of competitors from Notre Dame, UCLA, UC San Diego, Penn State, Nebraska and Lewis and Clark. Kentucky’s Marcus Williams (junior) finished the preliminary rounds with a 4-2 record, seeded 11th and went 3-1 in the elimination rounds to take runner-up at the tournament.

The WKU tournament was in the National Forensic Association Lincoln Douglas (NFA-LD) format, a new format for Kentucky debaters. NFA-LD is a one-person policy debate competition similar to the two-person format traditionally practiced by the team, where students debate a single policy topic for the entire season. The topic this year for NFA-LD is Resolved: The United States federal government should implement immigration reform that removes substantial statutory restrictions on legal immigration into the United States.

“Marcus Williams did an excellent job representing UK this past weekend. Anytime you make it to the final round of a tournament you’re doing a lot of things right. The fact that Marcus did this in a new event for UK is really incredible,” Debate Director Dave Arnett said.

The rest of the semester’s schedule includes virtual tournaments hosted by Gonzaga and Wake Forest.