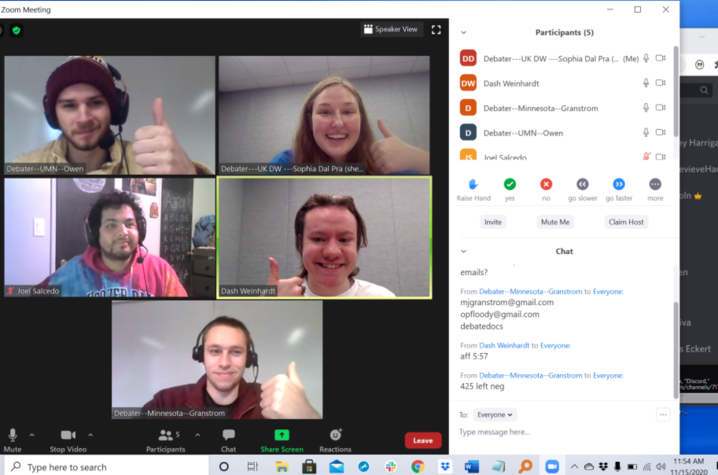 The University of Kentucky Intercollegiate Debate Team recently wrapped up its first semester of the 2020-2021 debate season with an impressive finish at the Wake Forest Online Invitational.

LEXINGTON, Ky. (Nov. 24, 2020) — The University of Kentucky Intercollegiate Debate Team recently wrapped up its first semester of the 2020-2021 debate season with an impressive finish at the Wake Forest Online Invitational. More than 100 teams from 22 states competed in the four-day event. Three Kentucky partnerships reached the elimination rounds. Sophia Dal Pra and Dash Weinhardt made it to the quarterfinals of the first-year division. Chris Eckert, Alan Ivackovic, Jordan Di and David Griffith all reached the round of 32 in the varsity division and notched impressive wins along the way by beating Northwestern, Emory, Columbia, Harvard and the Naval Academy.

Kentucky Debate reached the final four and secured a place in the top 10 nationally at Gongaza University’s tournament which includes 83 teams from 22 states. The team of Eckert and Ivackovic reached the semi-final round before falling to eventual champion Dartmouth. UK racked up huge wins against regional rivals and debate powerhouses including Louisville, Michigan State, Berkeley, Harvard and Georgetown.

Finally, the partnership of Griffith and Eckert received an invitation to the prestigious Harvard Round Robin. Only the top nine partnerships in the country were invited to participate, making the invitation itself a huge cause for celebration. The Griffith-Eckert pairing were the youngest team in attendance and finished fourth.

"This was the most challenging semester of competition in my career, and I couldn't be prouder of the way the team conducted itself,” said Director of Debate Dave Arnett. “Given how young the team is, I think a lot of folks would have expected a rebuilding season. Turning in a top 10 performance is always special but really needs to be appreciated this year. Our students and coaches deserve a lot of credit for their resiliency."