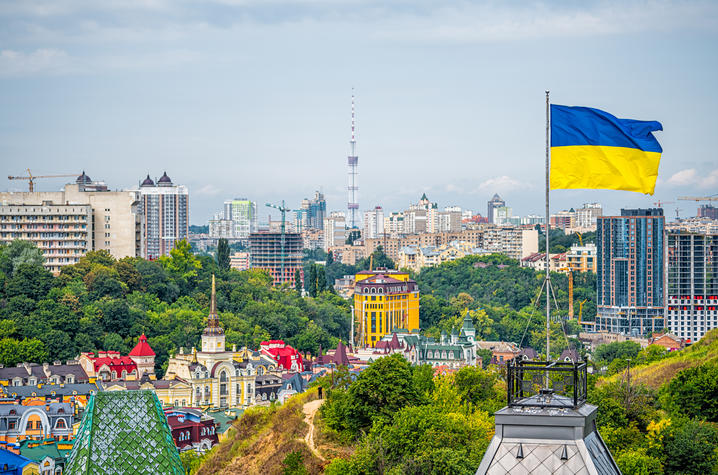 LEXINGTON, Ky. (March 2, 2022) — In times of crisis and uncertainty, we look to those with knowledge and experience to lead us through understanding. From economics and trade to warfare and culture — our faculty members at the University of Kentucky are generous in sharing their expertise to help the campus community and beyond comprehend events that are unfolding in real-time.

Their responses can be found in the Q&A below.

You can also join the College of Arts and Sciences from 12:30-1:30 p.m. this afternoon (March 2) as they host a virtual conversation between faculty members with expertise in international affairs about the ongoing crisis between Ukraine and Russia.

Registration is required and can be completed here.

There has been obvious tension between Russia and Ukraine for many years. Could you provide a brief history of relations between the two countries?

Ukraine and Russia share an origin story — the founding of Kyiv by the Varangians (Vikings) in the 9th Century. Ukrainian lands formally became part of the Russian Empire in the 17th century, but the origin of this current war is 30 years old. It stems from when the Soviet Union broke up into 15 different countries. Since 2000, President Putin for both reasons of national pride after the humiliation of the fall of the Soviet Union, and for security reasons, has wanted to regain control over Ukraine and prevent NATO from reaching Russia’s border with Ukraine. NATO is already on Russia’s borders, of course, but Ukraine is more symbolic for Putin and Russia, as another East Slavic nation (along with Belarus). He is much more motivated to control it as a result of this history than he would be Poland or Lithuania, for example. The Putin government has sought a friendly regime in Kyiv, but since 2014, the government has been pro-Western and anti-Putin. Putin annexed Crimea for strategic reasons in 2014, and then Russia encouraged Russian-speaking territories in Eastern Ukraine to declare independence in order to deter Ukraine from NATO admission.

Why do you believe Russia has chosen to invade Ukraine now? What can we perceive their objective to be?

There are many potential answers to this question. Some argue that President Putin has become concerned about the prospect of NATO expansion — which he regards as threatening, but that alone is too simple an explanation. Ukrainian military capabilities have steadily increased over the past several years, and Ukraine has recently acquired Turkish aerial drones that helped Azerbaijan defeat Armenia in Nagorno-Karabakh. Putin may see NATO as disunited and as a tempting opportunity to fracture the alliance. In his speeches, President Putin has made clear that he does not regard Ukraine as a legitimate political entity — instead treating it as an administrative mistake of the Bolsheviks. It also represents a most direct threat to his narrative about East Slavic unity and the option for a more open, democratic society as the path forward in Russia, which would undermine Putin’s power. These answers are not mutually exclusive, and many in Russia may believe some or all of them.

The way war is waged has evolved greatly over the past few decades. Do you anticipate this conflict to play out both in-person and online (cyber attacks, social media, etc.)?

I do anticipate cyberattacks. The war is also definitely playing out on social media, and Ukraine is decisively winning the information war. Russia is growing more isolated by the minute and virtually the entire world is rallying around Ukraine, but that won’t prevent the tanks from advancing and the bombs from falling unless the Russian government and people can pressure Putin to reverse course.

How prepared is Ukraine to defend itself? Do they even have the military capacity to do so?

Ukraine has been reforming and improving its military since 2014, but it started at a low base. The Ukrainian government intentionally avoided actions that could be viewed as provocative by Russia and didn’t prepare as aggressively as it might have in the weeks prior to the invasion. Many of Ukraine’s defensive measures feel unplanned, but it has acquired some sophisticated technology from NATO and EU countries. However, much of Ukraine’s military problem stems from geography — it is relatively flat, with few natural obstacles that would enable a strong defense. Russia has also pre-positioned forces around Ukraine, virtually encircling the country.

How is the U.S. currently involved and how will this conflict impact our relationships with both countries, as well as our NATO allies?

The U.S. has made clear that it will not intervene directly in the conflict by deploying troops or equipment to Ukraine. However, the U.S. has supported Ukraine diplomatically and has facilitated and coordinated the Western response to the invasion. This has included a sanctions regime of unprecedented scope against Russia and a massive military support effort for Ukraine. U.S. relations with Russia will likely become even more fraught as a result of the sanctions and support for Ukraine. But the U.S. has little choice in this matter.

Do we have any gauge on the support of the Russian people in their military/president’s decision to invade?

Paradoxically, the Putin regime has spent 20 years mobilizing the Russian population by celebrating Soviet patriotism and honoring soldiers who died in Russia’s wars. But on the other hand, the state’s focus on Russian military history has reminded the population that victory often comes at a tremendous cost. The Russian population has been preparing for war in the abstract but was shocked when the government attacked Ukraine. Tens of thousands of protesters have taken to the street in numerous cities across Russia and thousands have been arrested. Because protesting is dangerous, it’s hard to know how deep opposition to the war is, but I would suspect that there are large swaths of Russian society reluctant to go to war, particularly with Ukraine, given the shared history and close ties. There are also those that are avid supporters of the move, who resent the west “meddling” in Russia’s affairs and its sphere of influence, who believe that Ukraine is rightfully part of Russia. This group will not blame Putin for this invasion, but the west for leaving him no choice but to attack Ukraine.  Because the world’s sanctions have tanked the Russian ruble, the Russian population is already feeling the effects of war, and this could be destabilizing for the Russian government.

Why invade Ukraine as opposed to another former USSR country/territory?

Ukraine is more crucial to Russian national identity than any former Soviet republic other than Belarus. Many Russians regard Kiev as the cradle of Russian civilization, and President Putin has made clear that he views the separation of Ukraine from Russia as a historic crime. This puts Ukraine in a different category than Finland, Estonia, Latvia or Lithuania. Looking to the west in Ukraine then represents essentially abandoning an identity that Putin (and his supporters) value that makes Russia, Ukraine and Belarus distinct from the rest of Europe. This goes back to a long debate in Russia about the nature of the land and its people and how looking to western models may actually undermine what makes them special and indeed gives them power. Becoming western means to become weaker and to abandon core cultural values. If Ukraine is doing just that, it is a direct challenge to Russia’s identity in a fundamental way.  Perhaps, more importantly, Ukraine is not part of the NATO alliance and does not fall under the defensive umbrella provided by France, Germany, the United Kingdom and the United States.

This conflict is physically happening halfway across the world, but will the impact also be felt here in the Commonwealth?

Kentucky does not conduct a substantial trade with Russia or Ukraine. We export some bourbon to both countries, but that amounts to a rounding error on total bourbon sales. And neither Russia nor Ukraine are substantial players in the equestrian industry. However, Kentuckians may still feel the impact. Energy prices will increase — both in terms of oil and natural gas. Some supply chains may be disrupted. Air travel to Europe, and especially Asia, will be impacted by the boycott of Russian airspace. Kentuckians in the military may find themselves more likely to be dispatched to Eastern Europe, which will affect many families across the Commonwealth. There are also Russian and Ukrainian communities in Lexington and Louisville that are impacted.

Other than oil, what common items will be impacted?

Both Russia and Ukraine are major grain producers. There is a possibility of higher prices for food, as well as higher oil. However, in the long term, this war may force changes in global energy markets that could affect natural gas exploration and production in our state.

How long can we expect this conflict to last? What’s next?

It’s impossible to say. Russian forces have apparently not met President Putin’s expectations, both because of tougher than expected Ukrainian resistance and because of logistical problems. If Ukraine does not surrender, we could see urban fighting that could stretch across weeks — if not longer. Russia still has not committed all its forces, while Ukraine is being supplied with weapons by Europe and America. The fighting could continue a long time.

How much should we worry about President Putin’s decision to put Russian nuclear forces on alert?

There is much cause for concern here. Nuclear weapons, which can destroy entire cities and kill millions of people, have only been used once in war (WWII). Amazingly, we have avoided their use since that period, although we have experienced several “close calls.” Was President Putin’s recent action merely a bluff? Would he actually order a nuclear first strike against US/NATO forces? Such an action would almost certainly receive a nuclear response. What would happen next?