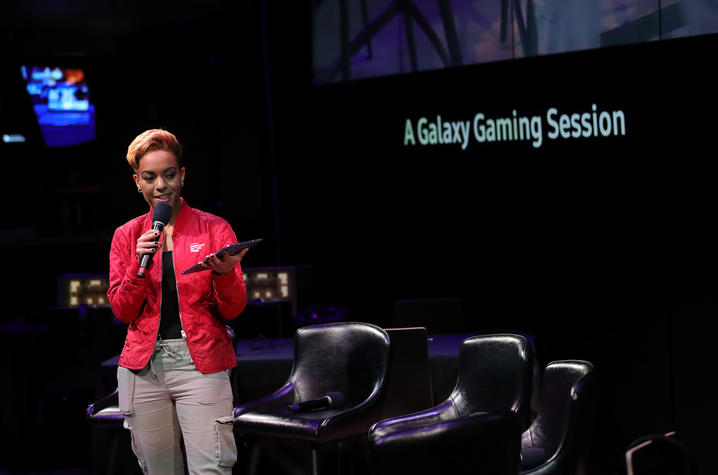 LEXINGTON, Ky. (Jan. 15, 2020) — As part of the next step in its innovative plan to be a global leader in connecting esports and higher education, the University of Kentucky — along with its partner Gen.G — is kicking off a national speaker series, devoted to the broad range of issues associated with esports and gaming.

The series kicks off at 5 p.m. Tuesday, Jan. 21, with a reception on the Social Staircase of the Gatton Student Center and will transition into Worsham Theatre for a panel discussion and Q&A led by Erin Ashley Simon, esports personality and UK alumna, on esports and gaming at UK and beyond.

“Over the next few months we’ll introduce Gen. G, leaders in the industry and our partners; invite UK alum and experts currently in the field to talk about their experiences; encourage community by connecting gamers with one another and others in the Commonwealth interested in esports and gaming," said Abbie Loynachan, Smart Campus initiative director. "I expect faculty and staff, current and future students, along with members of the community will all find the series engaging.”

The series, which will also be streamed globally through Twitch, will showcase content that is customized for students and alumni from relevant UK majors and degree programs and will provide the campus community with an opportunity for one-on-one engagement for potential UK students.

“This speaker series is a great opportunity for students to connect with one another and the community while also learning more about various internship opportunities and potential careers in the industry,” Loynachan said. "I look forward to seeing how the series manifests itself in the future."

The University of Kentucky has a bold mission — nurturing an outstanding learning community that inspires students, staff and faculty alike, preparing them for an increasingly diverse and technological world.

Committed to fulfilling this mission, the university recently announced a first of its kind partnership, introducing the greater campus community to esports.

Launched in October, the partnership with the global esports company, Gen.G, is a cornerstone of a strategic effort to leverage technology to maximize student success and build community.

The idea is to bring together academics, community and professional development, collegiate competition and multidisciplinary research around a growing global sport and business.

The esports initiative is part of a larger nationally recognized Smart Campus digital strategy over the next three years that focuses on the institution’s goals of increasing persistence and graduation rates, while preparing students for lives of meaning and purpose.

Gen.G Esports is a global esports organization founded in 2017, with offices in Seoul, Los Angeles, San Francisco and Shanghai. It owns and manages championship heritage teams competing in the world’s biggest esports competitions on the world’s most recognizable gaming franchises — Overwatch, League of Legends, Fortnite, PlayerUnknown’s Battlegrounds, Clash Royale, Call of Duty, Apex Legends and NBA 2K. Gen.G speaks to a generation that grew up on gaming, equally serving the needs of its players, fans and business partners to create a winning environment that positions its teams for success.

Gen.G is represented in the highly competitive Overwatch League by ‘Seoul Dynasty.’ ‘Gen.G LoL’ is a force on League of Legends front as the winner of the 2017 League of Legends World Championship in Beijing. Starting in 2020, Gen.G’s Shanghai franchise will compete in the NBA 2K League -- the League’s first franchise representing a city outside North America. ‘Gen.G HotS’ burst onto the scene in 2017, winning the Heroes of the Storm Global Champions at BlizzCon 2017 and in 2018. Gen.G’s PlayerUnknown’s Battlegrounds team ‘Gen.G PUBG’ claimed the third-person perspective title in the PUBG Global Invitational 2018.  A Chinese team, ‘Gen.G Clash Royale’ and a US-based Fortnite team were announced in 2018, stamping Gen.G’s industry leadership with a presence in three major esports markets.

More information about Gen.G esports and its teams can be found at: https://www.geng.gg/.