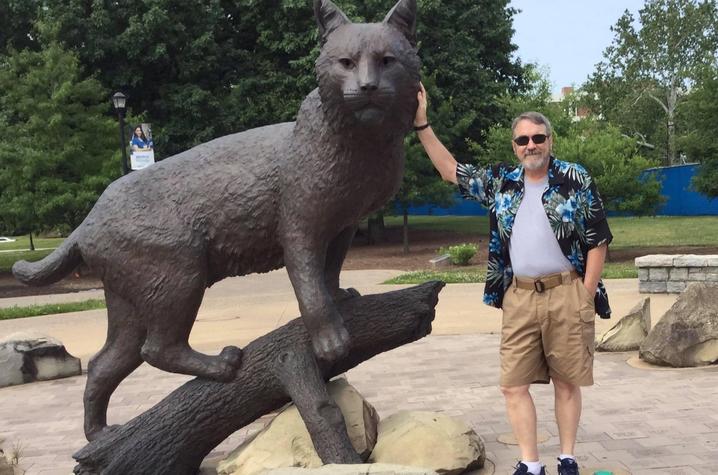 This December, the Donovan Scholar will be graduating with a Master of Applied Anthropology.

“Growing up in the 1960s and 1970s, the University of Kentucky was the school to go to if you lived in the Commonwealth,” he said. “I never thought of going to any other school.”

Feelings of anticipation and apprehension were intertwined as Chandler made a life-changing decision — to become a Wildcat.

While UK was everything he hoped it would be, Chandler admits, he didn’t live up to his own expectations. “During the 70’s, I was not a great student — to say the least,” he continued. “My GPA barely allowed me to graduate.”

But he did — Chandler crossed the commencement stage with a bachelor’s degree in production agriculture.

That day, he made a vow to himself.

“I decided I would give everything I could in any endeavor I pursued moving forward, even higher education.”

Following graduation in 1976, Chandler was commissioned as a second lieutenant from UK Army ROTC. He traveled to Fort Benning, Georgia, for infantry training, then to his first assignment in West Berlin.

“At that time, the city was still occupied by British, French, Russian and U.S. forces, and I spent nearly three years as an infantry platoon leader, anti-tank platoon leader and brigade staff office,” he explained. “During that time, I took many trips to East Berlin, and it opened my eyes to the stark differences in political systems.”

Chandler would go on to have many titles — such as being a member of the 82d Airborne Division — before going off active duty in 1987. However, he remained in the U.S. Army Reserve until retiring a decade later as a lieutenant colonel.

But Chandler is not your “typical” retiree.

In 2014, he was hired by a support command that manages all U.S. Army supplies in the Middle East, as their senior intelligence analyst. During his time there, Chandler was deployed to Afghanistan and Kuwait for intelligence work.

Then, after 42 years of combined service, he officially retired in 2018.

“My passion for UK was rekindled,” he said. “I decided to return to the university to take classes and have something to keep me busy.”

For Chandler, the learning experience came with some unique challenges.

“Of course, the 1970s was not an era of advanced technology — no laptops, no PowerPoint displays — everything was written on a chalkboard and copied into your notebook. The ability to see and follow presentations, compose papers and do research on a computer was beyond my wildest experience,” Chandler explained. “Added to this was the difference in my age. Being 40 years older than other students can be forbidding.”

The apprehension started to return.

But Chandler remained steadfast in the commitment he made to himself decades ago by pursing a bachelor’s in applied anthropology from the College of Arts and Sciences.

“I had always had a passion for archaeology. The Department of Anthropology, as well as the entire college has provided excellent instruction,” he said. “The faculty and staff treat me more like a family member than just another student.”

Over the last three years, Chandler has held on to that confidence and persistence.

His eagerness for learning, paired with the support from his newfound family convinced him to earn not one, but two, degrees from UK.

This December, the Donovan Scholar will be graduating with a Master of Applied Anthropology. Though proud of his accomplishments, he is also humble enough to admit — he didn’t achieve academic success on his own.

“I have been provided exceptional instruction, and the advice from faculty members — Shannon Plank, Scott Hutson, Richard Jefferies, Ann Kingsolver and Christopher Pool — has been instrumental in my having a 4.0 GPA since my return.”

Turning a dream into reality can take years of preparation. Chandler put in the work — earning the grades, the degrees and the respect of his classmates.

“I have made friends, mentored other students and have, I hope, been a credit to the student population in a small way,” he said.

Just as he always has, Chandler intends to lead this next phase of his life with grace and grit. He has already applied to the doctoral program.

“On Dec. 23, I will turn 68. If I’m accepted into the doctoral program, I will be around 73 when I graduate,” he said. “I fully intend to meet that date and fulfill a lifelong dream of obtaining a doctorate.”

Another vow that Chandler hopes will serve as inspiration for fellow nontraditional students.

“Never think you can’t accomplish something just because you are older than other people. We are only constrained by our own minds and what we consider our limitations,” he said. “Never deny yourself the opportunity to expand who you are and become who you want to be.”