LEXINGTON, Ky. (May 11, 2020) — It’s been said that exploration is part of human nature. History is filled with stories of adventurers who dared to chart the unknown. But some feel that drive stronger than others.

Growing up in Glasgow, Kentucky, Kelly Lynch — not unlike most bright-eyed kids — had dreams of becoming an astronaut. For most, those aspirations are fleeting. For Lynch, they never faded.

“My dream is still to become an astronaut and go to the Moon or Mars.”

Turning a dream into reality can take years of preparation. Lynch put in the work — earning the grades and graduating from the Gatton Academy of Mathematics and Science with more than 70 college credit hours.

Then, she needed to find a place to continue her education — a university that would foster success. “I knew UK had a great engineering program — I was confident it would allow me to accomplish my career goals.”

In the fall of 2015 — with confidence and determination in tow — Lynch embarked on a new journey as a freshman at the University of Kentucky.

Lynch knew mechanical engineering served as the most promising route to a career in aerospace, but she was passionate about chemistry. Taking the path less traveled, Lynch declared chemical engineering as her major.

“The primary challenge that I was faced with during my college career was the rigor of the curriculum.”

To this point, Lynch not only succeeded but excelled in her academic career. But college presented a new challenge. “I was accustomed to working on my own, as most introverts are, but what helps engineers succeed is working together and helping each other,” she said. “Engineers who work as a team, trust each other, and communicate effectively are the most successful.”

So, Lynch focused on her soft skills — and it paid off.

The summer following her freshman year, she was offered the internship of a lifetime at the NASA Marshall Space Flight Center (MSFC) in Huntsville, Alabama.

For more than six decades, NASA has relied on MSFC to deliver its most vital propulsion systems and hardware, flagship launch vehicles, world-class space systems, and state-of-the-art engineering technologies.

“I worked in a laboratory environment formulating inert solid propellant that was used for various testing purposes,” Lynch explained.

As the summer came to a close, Lynch returned to Lexington. But her time at NASA was only just beginning. She still describes the series of opportunities that followed as “surreal.”

In June of 2017, Lynch returned to MSFC as an intern in the same department. “Much of the work I had done previously was used to complete a follow-on project developing inert propellant mixes for the Europa Lander mission.”

At the 2019 College of Engineering Awards Banquet sponsored by Tau Beta Pi, Lynch received the Lou Takacs Engineering Co-op Award — given annually to the co-op of the year. Because commitment to the program means graduating in five years instead of four, Lynch wasn’t sure she should accept NASA’s Pathways Internship offer in 2018.

“I remember calling my parents and explaining, ‘If I take it, I will have to graduate an entire year later, but I’ll most likely have a job at NASA at the end of it.’ They said, ‘No question. Do it.’”

Some of the highlights during Lynch’s time at NASA include:

After completing a total of six NASA co-op rotations and internships — five at NASA MSFC in Huntsville, one at NASA JSC in Houston — Lynch says, chemical engineers are crucial to aerospace research.

Now, there will be one more.

From dream internship to dream career — upon graduating this May, Lynch will trade Kentucky for Alabama to officially become a member of the solid propulsion team at NASA MSFC.

“It was great to know that all the hard work was worth it,” she said. “In this role, I am hoping to complete more work in the inert propellant laboratory to support various NASA missions. I’m also looking forward to supporting the department in other areas as needed.”

Support is what Lynch hopes to pay forward. She credits professors in UK's Department of Chemical and Materials Engineering — such as Sarah Wilson, and the UK Engineering Career Development team — for helping her achieve academic success.

“The College of Engineering has placed a focus on linking coursework with its applicability in industry to better prepare students to apply material learned in the classroom in their internship and co-op positions, and I found this to be very helpful.”

As her college career comes to a close, Lynch is filled with pride. She is no longer that shy, little girl wishing upon shooting stars, but instead a self-confident graduate living her childhood dreams.

Now, Lynch is encouraging the younger generation to shoot for the moon.

“The path is not easy but stay motivated by thinking about where you want to end up. The engineers and scientists that I’ve met at NASA and other aerospace companies are making history with the work they are completing, and you could too.” 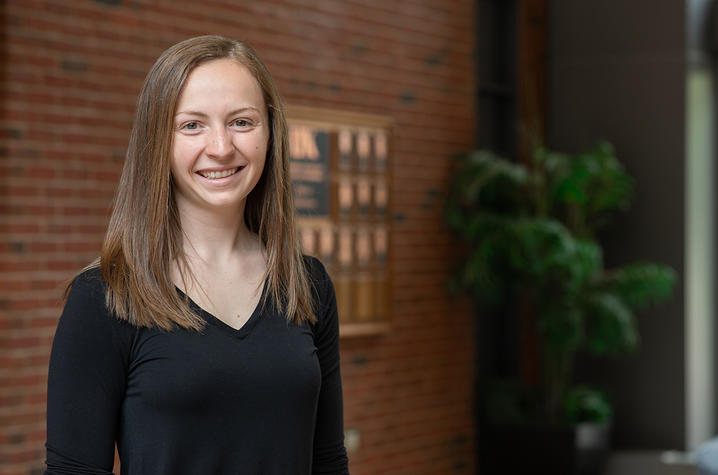 Upon graduating this May, Lynch will trade Kentucky for Alabama to officially become a member of the solid propulsion department at NASA. Photo courtesy of UK Engineering.