Watch why the University of Kentucky Hall of Distinguished Alumni is so important to our university.

LEXINGTON, Ky. (Oct. 5, 2021) — For this "UK at the Half," Tauyna Phillips, last year's University of Kentucky Alumni Association national president, and former UK President Charles Wethington, explain the importance of celebrating our alumni.

Last Friday, UK inducted 27 new members into its Hall of Distinguished Alumni. The inductees were also recognized during Saturday's UK Football game for their contribution to the welfare of the Commonwealth and nation in arts, sciences, business, industry, engineering, journalism, politics, military science, religion, agriculture, labor or other fields of endeavor.

"UK at the Half" airs during halftime of each UK football and basketball game broadcast on radio and is hosted by UK Public Relations and Marketing. To hear the "UK at the Half" interview, click on the play button above. 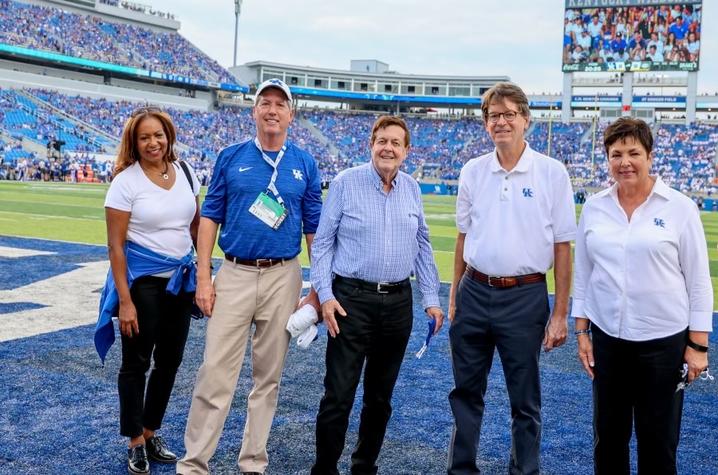 The 2020 inductees were welcomed back to campus on Friday for an induction ceremony, and some attended Saturday's UK football game. (Left to right:) Taunya Phillips, Davis Marksbury, Terry Woodward, Jim Duff and Paula Pope. Photo by Michael Huang.