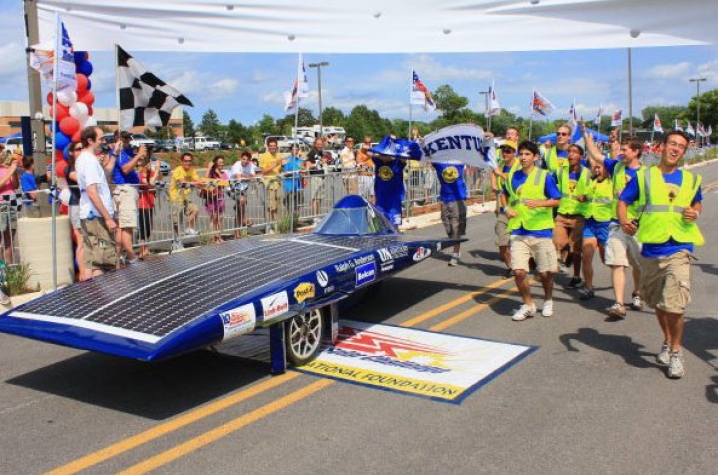 LEXINGTON, Ky. (July 1, 2010) - After two weeks of scrutineering, endless driving and hardly any sleep, the members of the UK Solar Car team are finally relaxing and enjoying the success as a result of their hard work.

The team finished ninth overall in its second American Solar Challenge that ended this past Sunday. The car, Gato Del Sol IV, traveled approximately 1,300 miles from Cresson, TX to Naperville, Ill., covering the distance in approximately 40 hours, from June 20-27. The team came in 11th place in last year's challenge.

Sam Nicaise, leader of the team, and 16 other students participated in the race.

"In the end, all the team members who were part of the trip learned more than they can begin to explain, had way too much fun, and didn't sleep a wink. This took us out of the realm of a "normal" college experience," said Nicaise on the team's website.

The design, construction and racing of Gato Del Sol IV was completely student-run and operated as part of the UK College of Engineering. Over 20 engineering students put considerable time into making it a working solar car.

"Gato IV was proven to be a great solar car, even if minor and major road blocks limited its race performance," said Nicaise.

The car, which weighs about 470 lbs without a driver, runs on lithium-polymer batteries, which are similar to what is found in laptops and cell phones. There are 1776 solar cells and 308 batteries, and the car ran from power that came in from the solar cells and was sent through a wire to the motor. A budget of over $200,000 was raised by the team members and provided through over 30 sponsors.

"I would like to thank everyone who has supported our team," said Nicaise. "Without the financial and service support of our sponsors, none of us would have the opportunity to excel above and beyond the classroom. Thank you to UK and the College of Engineering for never giving up on us and making us a shining star. Lastly, thanks to our friends and family who were never at a loss for words of encouragement and pride."