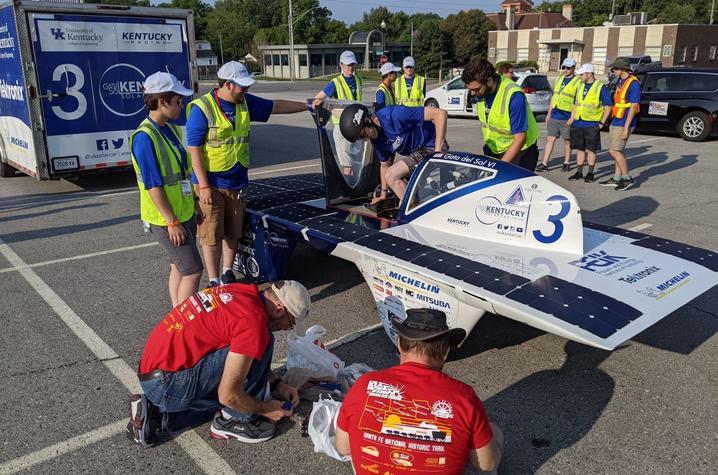 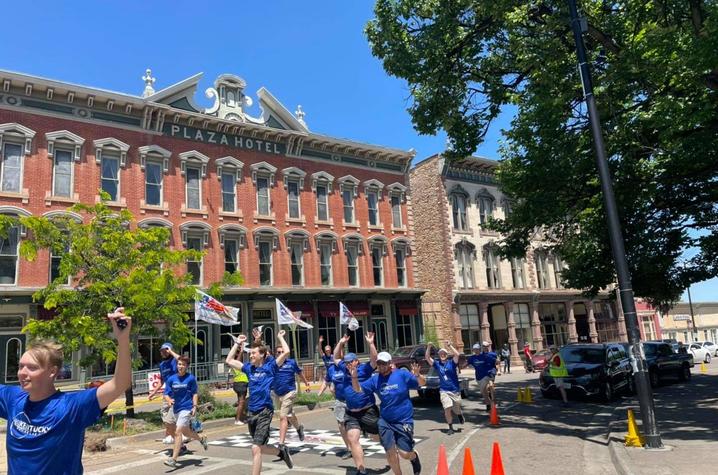 The University of Kentucky Solar Car Team is an independent, student-led organization formed in 1999 that designs, builds, and races solar electric vehicles. Undergraduate and graduate students of any majors and skill levels come together to gain hands-on experience with mechanical, electrical, and computer science design; racing strategy and logistics; and business marketing/fundraising. Every summer, collegiate solar electric vehicle teams across the country gather for a track race, the Formula Sun Grand Prix (FSGP) and every other year for a road race, the American Solar Challenge (ASC).

This year, team members arrived in Topeka, Kansas, on July 27, with Gato del Sol VI, the team’s sixth custom made solar electric vehicle which has been operational since 2018. The team was the first through the three-day technical scrutineering, a rigorous evaluation to ensure all built aspects of the car satisfy strict regulatory requirements. After finishing scrutineering first, they started first on the track and completed the most laps at Heartland Motorsport Park over three days to win the Formula Sun Grand Prix (FSGP).

"FSGP is as much a test of our driving ability as it is our ability to design and build a reliable car and fix difficult engineering problems on the fly,” said Donovin Lewis, a Ph.D. student in electrical engineering. “The technical and hands-on experience gained through engineering education at the University of Kentucky prepared us for quickly and effectively responding to crises and get us back on the track. Our own grit and dedication alongside years of passed-down knowledge and continuous development enabled the success we had out on the track."

The team finished with 250 laps or 625 miles of driving completed and was the only team to not incur a penalty during the three-day competition, finishing 11 laps ahead of MIT who took second place.

Mike Johnson, professor and chair in the Department of Electrical and Computer Engineering, said, “The Solar Car Team was absolutely incredible this year, and I am really proud of what they accomplished. This shows what engineers can do when they work together across the boundaries of their individual disciplines to design and carry-out solutions to real-world problems. I can’t wait to see what will come next.”

The closest the UK Solar Car Team had come to winning a competition prior was over 10 years ago in 2009, when it took second in FSGP with Gato del Sol III.

Ecstatic over its accomplishment, the team had little time to celebrate. Two days later, they would begin the American Solar Challenge (ASC), a 970-mile road competition spanning from Independence, Missouri, to Las Vegas, New Mexico. In the past six attempts, the UK Solar Car Team had only finished ASC twice — with a ninth-place finish in 2010 serving as their highest place.

“When it came to the road race, we were entering uncharted waters,” Lewis said. “Our most experienced team member, who has been on the team for nine years, had only experienced six hours of an ASC prior before battery issues took us out of that race. Entering ASC, the goal was simply to finish under our car’s own power for the first time in our team’s history.”

Over the five-day event, Gato del Sol VI displayed a strong showing. It spent 33 hours on the road, had no critical issues, and the team never had to load it on the trailer, running on its own power for the entirety of the race. In the end, UK placed second among the seven competing teams in their category with 965.2 miles driven, making a new mark for their best finish at ASC.

UK also picked up the “Most Improved” Award for having developed Gato VI, a car which failed to pass scrutineering in 2018, into a car that was now able to be driven into first place in FSGP.

"We still have so much to look forward to, especially this year,” said returning team member Sheldon Salins. “We will have another ASC this summer, with a road distance nearly double what we just completed. So, we are going to perfect Gato del Sol VI into the best vehicle it can be. Even more exciting, this fall marks the beginning of the construction of our next-generation car, Gato del Sol VII, which will be an even stronger competitor on the track and on the road."

Additional information about UK Solar Car can be found online.