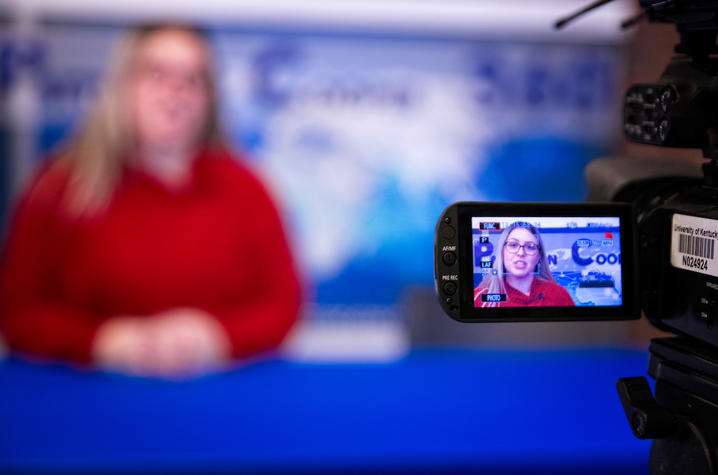 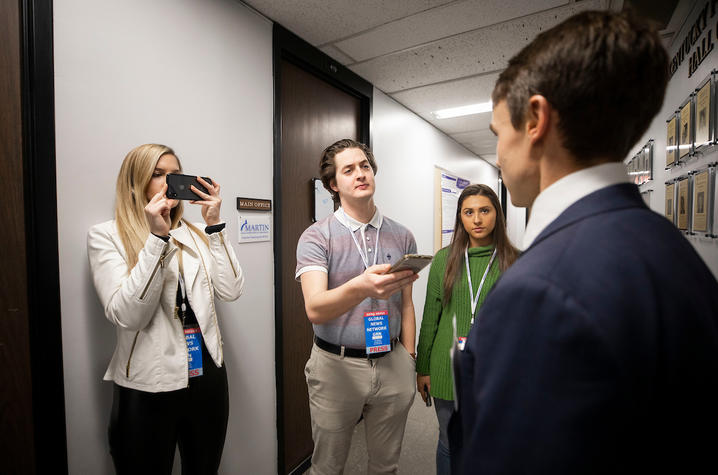 LEXINGTON, Ky. (March 6, 2020) — University of Kentucky College of Communication and Information students earned real-life experience during a 24-hour crisis simulation. Students from the School of Journalism and Media became the Global News Network (GNN), acting and reacting as media would in a time of crisis. Much like real life, global news is fast paced and sometimes high stress, but the role of the media is paramount for information sharing.

Kakie Urch, an associate professor of multimedia in the School of Journalism and Media said, "The students — from journalism and media, integrated strategic communication and information communication technology — get to feel the real-time pressure of producing accurate multimedia for a website, podcast and television set-up while engaging with international affairs information that is constantly changing.” Urch, who has taught multimedia in Botswana, Zambia, Ireland, Siberia and England, ran this year’s simulation. “Essentially, we, along with the Patterson School graduate students, are spending 24 hours dealing with a crisis as we would as professionals." This was Urch’s 12th crisis simulation.

This year’s scenario was a fictional issue involving the Americas surrounding the rising threat of mass migration, corruption, political instability, organized crime and the trafficking of illegal drugs.

Rules are given to the students to help them further their real-life experiences and keep them in their simulation characters. The most important rule for the journalism students was all communication must be through official channels provided to teams by Sim Control, including social media.

School of Journalism and Media students were set up in two rooms — one as a working online digital newsroom and the other set up in a TV studio setting. The job of the students acting as the GNN was to collect statements, conduct interviews, edit video, write web stories and create a WordPress site that became the central way for everyone in the simulation to gather information. There were also scheduled press conferences throughout the simulation.

Meagan Wilkins, a junior double majoring in communication and information communication technology, was part of the simulation’s first shift. “My role was a web producer, and I was able to develop the Global News Network website using my learned web development skills. We had a page for pictures, videos, breaking news stories and more. The other journalists would produce the content and then we would upload it to the site,” Wilkins said. “Overall, the experience in the simulation was actually really fun! It was all very exciting and honestly really fun for a required class.”

The UK Patterson School of Diplomacy and International Commerce hosted the simulation, playing the different countries involved in the crisis — the U.S., Mexico, Colombia, Venezuela, Honduras and Guatemala — as part of their DIP700 Wargaming and Simulation class. The simulation allows Patterson students to also gain real-life experience and incorporate skills and knowledge gained from their coursework into the operations based scenario.

Scoobie Ryan, the interim director of the School of Journalism and Media was the first professor from CI to do the simulation. “Robert Farley of the Patterson School approached me encouraging students to do a story on it. The following year we were all in as participants, and it’s grown ever since. It’s a unique opportunity for our students. Dr. Farley and the people at Patterson manage to come up with some elaborate scenarios that involve situations our students wouldn’t otherwise encounter. It forces our students to think on their feet. It’s been a great experience for them and the school.”

For more information about the College of Communication and Information visit https://ci.uky.edu/ci/about.