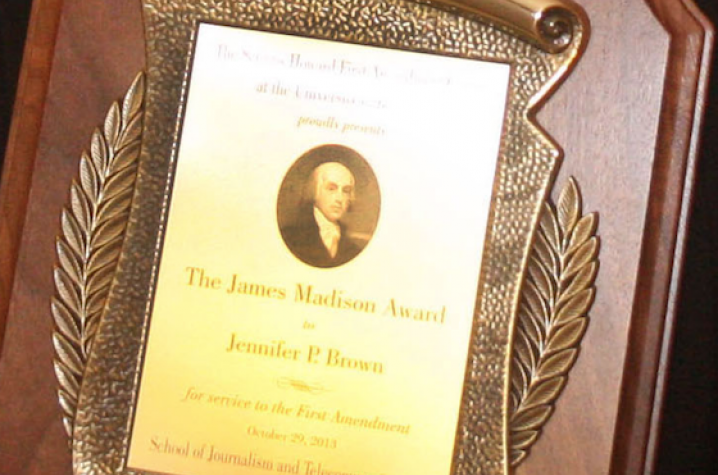 LEXINGTON, Ky. (Aug. 21, 2015) — The Scripps Howard First Amendment Center is requesting nominations for its annual James Madison Award to recognize a Kentuckian for outstanding service to the First Amendment.  The award, created in 2006, honors the nation’s fourth president, whose extraordinary efforts led to the passage and ratification of the Bill of Rights.

The Madison Award recognizes someone who has worked in one or more of these areas: open government and open records; promotion of the watchdog role of the press; defense against government or private censorship, or robust debate in the marketplace of ideas.

Nominees must have significant ties to Kentucky, and their efforts must have resulted in the preservation or expansion of freedom of the press and/or freedom of speech.  Dedication to the First Amendment principle of free expression is not accomplished in a day’s work but rather a lifetime.  Thus the award recognizes a long-term commitment to such ideals.

The deadline for nominations is Sept. 11.

Honorees do not have to be journalists.  The Scripps Howard First Amendment Center encourages recognition of those outside the journalism profession for their contributions to protect or expand First Amendment freedoms.  Nominees may include, for example, educators, lawyers, judges, scholars, librarians, students or ordinary citizens.  The most deserving recipient will be someone who has made a significant contribution regardless of how much public attention it has received.

The nominator must submit a letter identifying the nominee, listing the nominee’s address, phone number and position, and explaining why the nominee would be a worthy recipient.  The letter should detail the specific efforts taken on behalf of First Amendment rights and should discuss obstacles and difficulties as well as the impact of the nominee’s efforts.  The nominator may include up to three letters of support as well as other materials such as published or broadcast information.

Entries will be reviewed by a committee that will include previous winners and the director of the Scripps Howard First Amendment Center.  The committee will have the option of not selecting a recipient if it does not believe any candidate is deserving.

Nominees who meet the award criteria but are not selected initially will automatically be considered for two more years. The award will be presented at the annual First Amendment Celebration Sept. 29, in the UK Athletics Association Auditorium in the William T. Young Library.

Past winners were Judith Clabes, founder of UK’s First Amendment Center and a strong supporter of a free press as a newspaper editor and CEO of the Scripps Howard Foundation; Jon Fleischaker, the Commonwealth’s foremost media law attorney; veteran Courier-Journal reporter Tom Loftus, who has used public records extensively to expose government corruption; David Hawpe, retired Courier-Journal reporter and editor who fought relentlessly to open records and meetings; John Nelson, managing editor of The Advocate-Messenger in Danville and executive editor of Advocate Communications Inc., who was recognized for, among other activities, organizing a statewide open records audit; veteran newsman Al Smith, whose KET public affairs program, “Comment on Kentucky,” informed the state’s citizens on government issues affecting them; retired media law attorney Kim Greene, who fought many battles for open government for media clients she represented; Jennifer P. Brown, who as a journalist fought a number of open government battles and created a culture of watchdog journalism at the Kentucky New Era, and Steve Lowery, who helped update the Kentucky open records and open meetings laws and as president of the Kentucky Press Association developed the Legal Defense Fund to help smaller newspapers in their efforts to seek greater access to government.